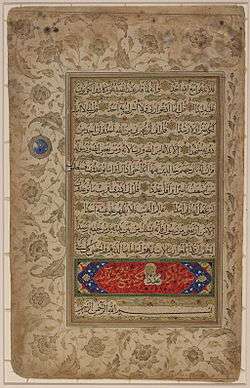 The 72nd chapter of the Qur'an entitled al-Jinn (the Spirits), as well as the heading and introductory bismillah of the next chapter entitled al-Muzzammil (The Enshrouded One).

Exorcism in Islam is called ruqya, and is thought to repair damage believed caused by sihr or witchcraft. Exorcisms today are part of a wider body of contemporary Islamic alternative medicine called al-Tibb al-Nabawi (Medicine of the Prophet).[1] Some people identifying as Muslim consider the practice to be "black magic" and contrary to Islam, in extreme cases advocating and executing severe punishment, even death.[2]

A related belief is that every person is assigned their own special jinnī, also called a qarīn (also called a hamzaad in Iran, India & Pakistan), of the jinn that whisper to people's souls and tell them to submit to evil desires.[6][7][8] The notion of a qarīn is not accepted by all Muslims. Some believe that Šayṭān whispers in human minds, and he is assigned to each human being.[9]

In a typical Islamic exorcism the treated person lies down while a white-gloved therapist places a hand on their head while chanting verses from the Quran.[1] In one case a woman was made to drink large amounts of "holy" water, made to vomit, beaten, and made to bathe in hot water.[10]

Specific verses from the Quran are recited, which glorify God (e.g. The Throne Verse (Arabic: آية الكرسي Ayatul Kursi) and invoke his help. In some cases the adhan/"ah-zan" (the call for daily prayers) is also read, believed to have the effect of repelling non-angelic unseen beings or the jinn.

The Islamic prophet Muhammad taught his followers to read the last three suras from the Quran, Surat al-Ikhlas (The Fidelity), Surat al-Falaq (The Dawn) and Surat an-Nas (Mankind).

This is not the only "Procedure"; there are many used in Muslim communities around the world. Examples are beating the afflicted, rolling in carpets and exposure to red pepper smoke. Most of them are absorbed from local pagan rituals, and they are not derived from Islamic teaching.[11]

The trend in al-Tibb al-Nabawi treatments, cosmetics and toiletries is often associated with fundamentalists who charge that Western, chemically laced prescriptions aim to poison Muslims or defile them with insulin and other medicines made from pigs.[1] Members of terrorist groups have been involved in Islamic remedies as healers and sellers, while some clinics are used as recruiting grounds for Islamist causes.[1]

“Islamic medicine carries a cachet that, by taking it, you are reinforcing your faith – and the profits go to Muslims,” says Sidney Jones, an expert on Islam in Southeast Asia with the International Crisis Group.[1]