The adhan (Arabic: أَذَان‎‎ [ʔaˈðaːn]), (or azan as pronounced in Afghanistan, Azerbaijan, Bangladesh, India, Indonesia, Iran, Kazakhstan, Malaysia, Egypt, Pakistan, Russia, and Turkmenistan, ezan in Turkey, Bosnia and Herzegovina, Albania, Kosovo, azon in Uzbekistan and Tajikistan, and baang in some regions of Pakistan, Kurdistan, India, and Aceh, Indonesia) is the Islamic call to worship, recited by the muezzin at prescribed times of the day. The root of the word is ʾadhina أَذِنَ meaning "to listen, to hear, be informed about". Another derivative of this word is ʾudhun (أُذُن), meaning "ear".

Adhan is called out by a muezzin from the mosque five times a day, traditionally from the minaret, summoning Muslims for mandatory (fard) worship (salat). A second call, known as iqama, (set up) then summons Muslims to line up for the beginning of the prayers. The main purpose behind the multiple loud pronouncements of adhan in every mosque is to make available to everyone an easily intelligible summary of Islamic belief. It is intended to bring to the mind of every believer and non-believer the substance of Islamic beliefs, or its spiritual ideology. In modern times, loudspeakers have been installed on minarets for this purpose.

The adhan recites the Takbir (God is great)[1] followed by the Shahada (There is no god but God, Muhammad is the messenger of God).[2] This statement of faith, called the Kalimah, is the first of the Five Pillars of Islam.

The Mu'adhan or pronounced "Mu'azzin" or "Mu'ezzin" is the person who recites the adhan from the mosque. Typically in modern times, this is done using a microphone: a recitation that is consequently broadcast to the speakers usually mounted on the higher part of the mosque's minarets, thus calling those nearby to prayer. The Mu'adhan is chosen for his talent and ability in reciting the adhan beautifully, melodiously and loudly for all Muslims to hear. This is one of the important duties in the mosque, as his companions and community rely on him in his call for Muslims to come to pray in congregation. The Imam leads the prayer five times a day. The first Mu'adhan in Islam was Bilal Ibn Rabah, a freed slave from Africa.[3]

Fatimid/Ismaili/Dawoodi Bohra believe and include and recite this at same place, twice in main adhan, but not in Iqama.

Fatimid/Ismaili/Dawoodi Bohra also recite mohammadun -va- ali-un khayr-ul- basar va itarat-o- homa khayr-ul-itar (Muhammad and Ali are the best gentleman and their progeny is the best of progeny) twice after 6th part Ḥayya ʿala-khayr il-ʿamal. At the end of Azaan, they recite Lā ilāha illā llāh twice (but once in Iqama). This tradition is continued from their first Da'i al-Mutlaq, Zoeb bin Moosa (1132 CE), after their 21st Imam, At-Tayyib Abi l-Qasim, and claim this is true Fatimid tradition.[12][13][14]

Sunnis state that the adhan (azan) was not written or said by the Islamic prophet, Muhammad, but by one of his Sahabah (his companions). Umar, a prominent sahabi of Muhammad, had a vision in his dream, in which the call for prayers was revealed to him by God. He later related this to his companions. Meanwhile, this news reached Muhammad, and he liked it and confirmed it. Because of his stunning voice Muhammad chose a freed Habeshan slave by the name of Bilal ibn Rabah al-Habashi to make the call for prayers. Muhammad preferred the call better than the use of bells (as used by the Christians) and horns (as by the Jews).[4][5][6][7][15]

During the Friday prayer (Salat Al Jumu'ah), there is one adhan but some Sunni Muslims increase it to two adhans; the first is to call the people to the mosque, the second is said before the Imam begins the khutbah (sermon). Just before the prayers start, someone amongst the praying people recites the iqama as in all prayers. The basis for this is that at the time of the Caliph Uthman he ordered two adhans to be made, the first of which was to be made in the marketplace to inform the people that the Friday prayer was soon to begin, and the second adhan would be the regular one held in the mosque. Not all Sunnis prefer two adhans as the need for warning the people of the impending time for prayer is no longer essential now that the times for prayers are well known.

Shi'a sources state Muhammad, according to God's command, ordered the adhan as a means of calling Muslims to prayer. Shi'a Islam teaches that no one else contributed, or had any authority to contribute, towards the composition of the adhan.[4][5][6][7][9]

Other Shi'a sources state that Bilal ibn Rabah al-Habashi was, in fact, the first person to recite the adhan publicly out loud in front of the Muslim congregation.

The fundamental phrase Lā- ilāha-illā-al-lāh is the foundation stone of Islam along with the belief in it. It declares that "there is no god but the God". This is the confession of Tawhid or the "doctrine of Oneness [of God]".

The phrase Muḥammadun –rasulu-llāh fulfils the requirement that there should be someone to guide in the name of God, which states Muhammad is God's Messenger,rasul, nabi (prophet). This is the acceptance of prophet-hood or Nabuwat of Muhammad. 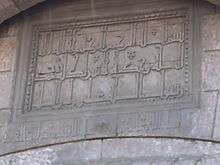 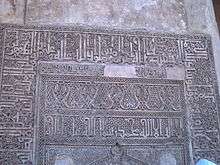 The qiblah of Mustansir of Shia Fatimid dynasty of, in Mosque of Ibn Tulun of Cairo showing Kalimat ash-shahādah with the phrase ʿalīyun walī allāh

Muhammad declared Ali (Ali bin Abu Talib) as his successor, at Ghadir Khumm, which was required for the continuation of his guidance. According to the hadith of the pond of Khumm, Muhammad stated that "Of whomsoever I am the mawla, Ali is his mawla". Hence, it is recommended to recite the phrase ʿalīyun walī allāh means "Ali is His (God's) Wali "the headman."

There are several Ayahs in the Quran[9][16] and hadiths in the Sunnah confirming the Shia belief of the 12 Imams.

Adhan reminds everyone, these three Islamic teaching Tawhid, Nabuwat and Imamate before each prayer. These three emphasise devotion to God, Muhammad and Imam, which are so linked together that these can not be viewed separately. One leads to other and finally to God.

The phrase is optional to some Shia as justified above. They feel that Ali's Valayat is self-evident, a testification and need not be declared. However, the greatness of God is also taken to be self-evident, but Muslims still declare Allāhu ʾAkbar to publicize their faith. This is the reason that the most Shia give for the recitation of the phrase regarding Ali.

What to Recite During Adhan (Call to Prayer)

What to Recite after Adhan

English: I bear witness that there is no god but Allah alone with no partner and that Muhammad is His slave and Messenger, and the Lord God's chosen messenger is Muhammad and Islam is his religion.

2. An invocation of blessings on the Prophet Muhammad (صلى الله عليه وسلم):

3. Waseelah for the Prophet is then requested ( صلى الله عليه وسلم):

4. Dua are then made directly to Allah, between the adhan and the iqamaah.

Muhammad said: "Repeat the words of the Mo'athen and when you finish, ask ALLAH what you want and you will get it"[22]

Each phrase is followed by a longer pause and is repeated one or more times according to fixed rules. During the first statement each phrase is limited in tonal range, less melismatic, and shorter. Upon repetition the phrase is longer, ornamented with melismas, and may possess a tonal range of over an octave. The adhan's form is characterised by contrast and contains twelve melodic passages which move from one to another tonal center of one maqam a fourth or fifth apart. The tempo is mostly slow; it may be faster and with fewer melismas for the sunset prayer. During festivals, it may be performed antiphonally as a duet.[23]

As an extension of the reforms brought about by the establishment of the Republic of Turkey in 1923, the Turkish government at the time, encouraged by Atatürk, introduced secularism to Turkey. The program involved implementing a Turkish adhan program as part of its goals, as opposed to the conventional Arabic call to prayer.[24]

The adhan was replaced with the following:

Following the conclusion of said debates, the Presidency of Religious Affairs (Diyanet İşleri Başkanlığı) released an official mandate on July 18, 1932, announcing the decision to all the mosques across Turkey, and the practice was continued for a period of 18 years.

On July 16, 1950, a new government was sworn in, led by Adnan Menderes, which restored Arabic as the liturgical language.

The adhan is mentioned in the eighth verse of İstiklâl Marşı, the Turkish national anthem:

O glorious God, the sole wish of my soul is that,
No heathen's hand should ever touch the bosom of my sacred Temples.
These adhans, whose shahadahs are the foundations of my Dīn (religion),
May their noble sound last loud and wide over my eternal homeland.