Final stellation of the icosahedron

This polyhedron is the seventeenth stellation of the icosahedron, and given as Wenninger model index 42.

As a geometrical figure, it has two interpretations, described below:

Johannes Kepler researched stellations that create regular star polyhedra (the Kepler-Poinsot polyhedra) in 1619, but the complete icosahedron, with irregular faces, was first studied in 1900 by Max Brückner. 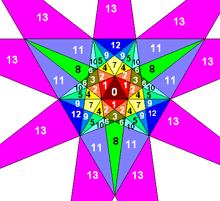 Stellation diagram of the icosahedron with numbered cells. The complete icosahedron is formed from all the cells in the stellation, but only the outermost regions, labelled "13" in the diagram, are visible.

As a simple polyhedron

As a simple, visible surface polyhedron, the outward form of the final stellation is composed of 180 triangular faces, which are the outermost triangular regions in the stellation diagram. These join along 270 edges, which in turn meet at 92 vertices, with an Euler characteristic of 2.[9]

When regarded as a three-dimensional solid object with edge lengths a, φa, φ2a and φ2a√2 (where φ is the golden ratio) the complete icosahedron has surface area[10]

As a star polyhedron

The complete stellation can also be seen as a self-intersecting star polyhedron having 20 faces corresponding to the 20 faces of the underlying icosahedron. Each face is an irregular 9/4 star polygon, or enneagram.[6] Since three faces meet at each vertex it has 20 × 9 / 3 = 60 vertices (these are the outermost layer of visible vertices and form the tips of the "spines") and 20 × 9 / 2 = 90 edges (each edge of the star polyhedron includes and connects two of the 180 visible edges).

When regarded as a star icosahedron, the complete stellation is a noble polyhedron, because it is both isohedral (face-transitive) and isogonal (vertex-transitive).