Flevoland (Dutch pronunciation: [ˈfleːvoːˌlɑnt]) is the twelfth province of the Netherlands. It is located in the centre of the country, where the former Zuiderzee was.

Flevoland was established on 1 January 1986, when the southern and eastern Flevopolders were merged into one province. Almost all of the land belonging to the province was only reclaimed in the 1950s and '60s.[1]

The province has about 403,280 inhabitants (2015) and consists of 6 municipalities. Its capital is Lelystad.

After a flood in 1916, it was decided that the Zuiderzee, an inland sea within the Netherlands, would be enclosed and reclaimed: the Zuiderzee Works started. Other sources[2] indicate other times and reasons, but also agree that in 1932, the Afsluitdijk was completed, which closed off the sea completely. The Zuiderzee was subsequently called IJsselmeer (lake at the end of the river IJssel).

The first part of the new lake that was reclaimed was the Noordoostpolder (Northeast polder) in 1939. This new land included the former islands of Urk and Schokland and it was included in the province of Overijssel. After this, other parts were reclaimed: the Southeastern part in 1957 and the Southwestern part in 1968. There was an important change in these post-war projects from the earlier Noordoostpolder reclamation: a narrow body of water was preserved along the old coast to stabilise the water table and to prevent coastal towns from losing their access to the sea. Thus Flevopolder became an artificial island joined to the mainland by bridges. The municipalities on the three parts voted to become a separate province, which happened in 1986.

Flevoland was named after Lacus Flevo, a name recorded in Roman sources for a large inland lake at the southern end of the later-formed Zuiderzee. Draining the Flevoland polders revealed many wrecks of aircraft that had crashed into the IJsselmeer during World War II, and also fossils of Pleistocene mammals.

In February 2011, Flevoland, together with the provinces of Utrecht and North Holland, showed a desire to investigate the feasibility of a merger between the three provinces.[3] This has been positively received by the Dutch cabinet, for the desire to create one Randstad province has already been mentioned in the coalition agreement.[4] The province of South Holland, part of the Randstad urban area, visioned to be part of the Randstad province,[5] and very much supportive of the idea of a merger into one province,[6] is not named. With or without South Holland, if created, the new province would be the largest in the Netherlands in both area and population. 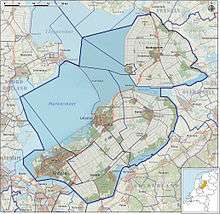 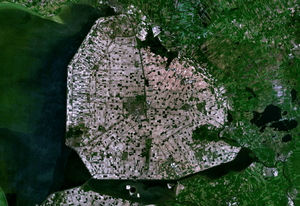 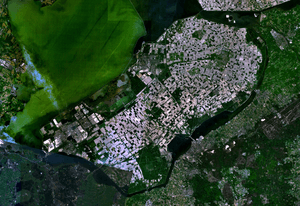 They are two polders with a joint hydrological infrastructure, with a dividing dike in the middle, the Knardijk, that will keep one polder safe if the other is flooded. The two main drainage canals that traverse the dike can be closed by floodgates in such an event. The pumping stations are the Wortman (diesel powered) at Lelystad-Haven, the Lovink near Harderwijk on the mainland and the Colijn (both electrically powered) along the northern dike beside the Ketelmeer.

A new element in the design of Eastern Flevoland is the larger city Lelystad (1966), named after Cornelis Lely, the man who had played a crucial role in designing and realising the Zuiderzee Works. Other more conventional settlements already existed by then; Dronten, the major local town, was founded in 1962, followed by two smaller satellite villages, Swifterbant and Biddinghuizen, in 1963. These three were incorporated in the new municipality of Dronten on 1 January 1972.

Southern Flevoland has only one pumping station, the diesel powered De Blocq van Kuffeler. Because of the hydrological union of the two Flevolands it simply joins the other three in maintaining the water-level of both polders. Almere relieves the housing shortage and increasing overcrowding on the old land. Its name is derived from the early medieval name for Lacus Flevo. Almere was to be divided into 3 major settlements initially; the first, Almere-Haven (1976) situated along the coast of the Gooimeer (one of the peripheral lakes), the second and largest was to fulfill the role of city centre as Almere-Stad (1980) and the third was Almere-Buiten (1984) to the northwest towards Lelystad. In 2003, the municipality made a new Structuurplan which started development of three new settlements: Overgooi in the southeast, Almere-Hout in the east, and Almere-Poort in the West. In time, Almere-Pampus could be developed in the northwest, with possibly a new bridge over the IJmeer towards Amsterdam. 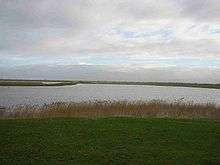 The Oostvaardersplassen is a landscape of shallow pools, islets and swamps. Originally, this low part of the new polder was destined to become an industrial area. Spontaneous settlement of interesting flora & fauna turned the area into a nature park, of such importance that the new railway-line was diverted. The recent decline in agricultural land use will in time make it possible to expand natural land use, and connect the Oostvaardersplassen to the Veluwe.

The centre of the polder most closely resembles the pre-war polders in that it is almost exclusively agricultural. In contrast, the southeastern part is dominated by extensive forests. Here is also found the only other settlement of the polder, Zeewolde (1984), again a more conventional town acting as the local centre. Zeewolde became a municipality at the same time as Almere on 1 January 1984, which in the case of Zeewolde meant that the municipality existed before the town itself, with only farms in the surrounding land to be governed until the town started to grow.

The King's Commissioner of Flevoland is Leen Verbeek,[7] who is a member of the Labour Party (Netherlands) (PvDA). The States of Flevoland have 39 seats. Since the 2011 provincial elections, the People's Party for Freedom and Democracy has been the largest party in The States, with 9 seats. The second largest parties are the Labour Party and the Party for Freedom, both with 6 seats.

Since the 2011 provincial elections, the seats of the States of Flevoland are as following:[8] 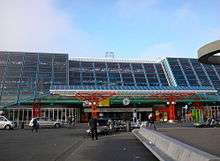 The Flevopolder is served by the Flevolijn, running from Weesp to Lelystad, and the Hanzelijn, continuing from Lelystad towards Zwolle. The two railways stations of the province with intercity services are Almere Centrum and Lelystad Centrum.

Furthermore, Lelystad Zuid is a planned railway station between Almere Oostvaarders and Lelystad Centrum. It has been partially constructed preceding the opening of the railway in 1988, but construction has been put on indefinite hold because of slower-than-expected development of the city of Lelystad.

Amongst the cities with direct train connections to Flevoland are Amsterdam, Utrecht, The Hague, Zwolle, Groningen, Leeuwarden and Schiphol Airport.

There are two airports in the province: Lelystad Airport and Noordoostpolder Airport.