Lelystad (Dutch: [ˈleːlistɑt]) is a municipality and a city in the centre of the Netherlands, and it is the capital of the province of Flevoland. The city, built on reclaimed land, was founded in 1967 and was named after Cornelis Lely, who engineered the Afsluitdijk, making the reclamation possible. Lelystad is approximately 3 metres (9.8 feet) below sea level.

Lelystad is built on the seabed of the former Zuiderzee. About 6500 years ago this wetland was above high tide level and inhabited; the Netherlands have steadily subsided since. Near Lelystad at Swifterbant, the oldest human skeletons in Western Europe were discovered. Due to rising water levels and storms, the peatlands were washed away, and the Lacus Flevo (in Roman times) grew to be the Almere (Middle Ages) and became the Zuiderzee. The Zuiderzee (Southern Sea) was the main transport route from Amsterdam to the North Sea and the Hanseatic League cities. Due to the many shipwrecks in Flevoland, Lelystad now houses the National Centre for Maritime History, with a museum and the shipyard that has built the Batavia replica. Sunset over the IJsselmeer, bordering Lelystad.

After the Second World War the Zuiderzee Works continued, constructing the polder of Eastern Flevoland. In 1950 work commenced on several construction islands in the middle of the IJsselmeer. Lelystad-Haven was the largest island, and its wooden barracks housed a community of dyke-builders. In 1955 they reached the mainland, which made it possible to drive to Lelystad by car. One of the three pumping stations, which drained the polder in June 1957, was the diesel-powered Wortman in Lelystad-Haven. Until 1967 the only inhabitants of Lelystad were technical engineers and laborers and superintendents, living on the former construction island. 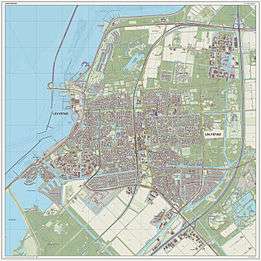 Lelystad is the largest municipality in the Netherlands in area, but a large part of that area is water: Markermeer and IJsselmeer. Another major area is the internationally famous nature park of Oostvaardersplassen, which arose naturally when the polder of South Flevoland was drained. Lelystad is also surrounded by a square of woodlands and parks and flat farmland. The importance of the landscape and sky is emphasized by several pieces of land art: engineers' work and works such as the Observatorium by Robert Morris (see below).

Lelystad has several tourist attractions, including:

Lelystad hosts many one-day events like the Lelystad Airshow, the Water Festival, the National Old Timer Day, Lelystad Speedway, Architecture day and several sports events. On the Midland Circuit many motor, kart and stock car racing events and several autoclub meetings are held. On the coast there are several marinas.

Lelystad has good infrastructure. Lelystad can be reached by air, water, and land.

The honeycomb grid in the arms of Lelystad represents the dykes, built with six-edged concrete or basalt blocks. The colour gold indicates the high costs of the project of making the polder. The centre shield is the arms of engineer Cornelis Lely. The sealions reflect the history of the land.

In the flag, the fleur-de-lis (lily) again takes a central point, referring to the name Lely. The yellow (golden) background reflects the precious land, and the blue lines the dykes and waterways. The flag of the province is similarly adorned with the fleur-de-lis to commemorate Lely.

Other plans for the near future include the development of the coastal area (Lelystad borders both the Markermeer and the IJsselmeer) for tourist and commercial purposes.