This article is about the Dutch province. For other uses, see Drenthe (disambiguation).

Drenthe (Dutch pronunciation: [ˈdrɛntə]) is a province of the Netherlands, located in the northeast of the country. It is bordered by Overijssel to the south, Friesland to the west, Groningen to the north, and Germany (districts of Emsland and Bentheim) to the east. In 2014, it had a population of 488,957 and a total area of 2,683 km2 (1,036 sq mi).

Drenthe has been populated for 150,000 years. The region has subsequently been part of the Bishopric of Utrecht, Habsburg Netherlands, Dutch Republic, Batavian Republic, Kingdom of Holland, and the Netherlands. Drenthe is an official province since 1796.

The capital and seat of the provincial government is Assen. The King's Commissioner of Drenthe is Jacques Tichelaar. The Labour Party (PvdA) is the largest party in the States-Provincial, followed by the People's Party for Freedom and Democracy (VVD) and the Christian Democratic Appeal (CDA).

Drenthe is a sparsely populated rural area, unlike many other parts of the Netherlands. Except for some industry in Assen and Emmen, the land in Drenthe is mainly used for agriculture.

A dolmen or hunebed near Schoonoord 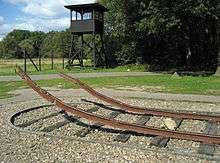 The name Drenthe is said to stem from *thrija-hantja meaning "three lands".

Drenthe has been populated by people since prehistory. Artifacts from the Wolstonian Stage (150,000 years ago) are among the oldest found in the Netherlands. In fact, it was one of the most densely populated areas of the Netherlands until the Bronze Age. The most tangible evidence of this are the dolmens (hunebedden) built around 3500 BC. 53 of the 54 dolmens in the Netherlands can be found in Drenthe, concentrated in the northeast of the province.

Drenthe was first mentioned in a document from 820, it was called Pago Treanth (Drenthe district). In archives from Het Utrechts Archief, from 1024 to 1025, the "county Drenthe" is mentioned, when Emperor Henry II gave it to Bishop Adalbold II of Utrecht.

After long being subject to the Utrecht diocese, Bishop Henry of Wittelsbach in 1528 ceded Drenthe to Emperor Charles V of Habsburg, who incorporated it into the Habsburg Netherlands. When the Republic of the Seven United Provinces was declared in 1581, Drenthe became part of it, although it never gained provincial status due to its poverty; the province was so poor it was exempt from paying federal taxes and as a consequence was denied representation in the States General. The successor Batavian Republic granted it provincial status on 1 January 1796.

Shortly before the outbreak of the Second World War, the Dutch government built a camp near the town of Hooghalen to accommodate German (Jewish) refugees. During the Second World War, the German occupiers used the camp (which they named KZ Westerbork) as a Durchgangslager (transit camp). Many Dutch Jews, Sinti, Roma, resistance combatants and political adversaries were imprisoned before being transferred to concentration and extermination camps in Germany and Poland. Anne Frank was deported on the last train leaving the Westerbork transit camp on 3 September 1944. 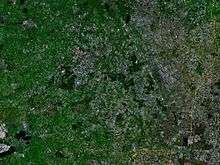 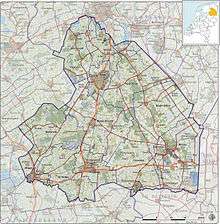 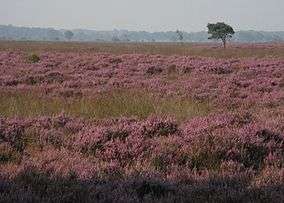 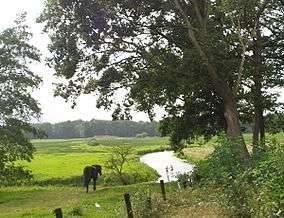 Drenthe has several heathlands and no significant rivers or lakes. The national parks Drents-Friese Wold and Dwingelderveld (IUCN category II) and the national landscape Drentsche Aa (IUCN category V) are all (partially) located in the province.

The major urban centers of the province are the capital Assen in the north and Emmen, Meppel, Hoogeveen, and Coevorden in the south.

The Netherlands has been subject to a large amount of municipal mergers during the last decades. Drenthe is no exception; the largest concurrent merger happened in 1998, when 32 municipalities were amalgamated into 10 larger municipalities.[7] As of 2014 Drenthe consists of 12 municipalities; Emmen is the largest municipality in terms of both population and area, Westerveld is the least populous and Meppel covers the smallest area.[8][9]

On 1 January 2014, Drenthe had a total population of 488,957 and a population density of 182.2/km2 (472/sq mi).[1][2] It is the 3rd least populous and 4th least densely populated province of the Netherlands, with only Flevoland and Zeeland having fewer people (Friesland has a lower density, but higher population). Emmen is the most populous municipality in the province.

Agriculture is an important employer, although industrial areas are found near the cities. The quietness of the province is also attracting a growing number of tourists.

Drenthe is known as the "Cycling Province" of the Netherlands and is an exceptional place for a cycling holiday, having hundreds of kilometres of cycle paths through forest, heath and along canals and many towns and villages offering refreshment along the way. Drenthe exports through the entire Netherlands and also receives supplies and goods from Germany, making it a good business district. Many Dutch and German multinational companies are settled in Drenthe.

Over half the population of Drenthe speaks the Drents dialect. Each town or village has its own version. All versions are part of the Low Saxon language group. Dutch Low Saxon has been officially recognised by the Dutch government as a regional language and is protected by the European Charter for Regional or Minority Languages.

FC Emmen is the only professional football club in Drenthe. It plays in the Eerste Divisie and its home stadium is JenS Vesting.

The TT Circuit in Assen hosts a MotoGP race and the Dutch TT. 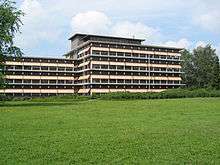 Seat of the provincial government in Assen

The States of Drenthe have 41 seats, and is headed by the King's Commissioner, currently Jacques Tichelaar. While the provincial council is elected by the people of Drenthe, the Commissioner is appointed by the King and the cabinet of the Netherlands. With 12 seats, the social democratic PvdA is the largest party in the council. The daily affairs of the province are taken care of by the Gedeputeerde Staten, which are also headed by the Commissioner; its members (gedeputeerden) can be compared with ministers.

The Meppel railway station is a national heritage site[20]

There are four railways partially in the province of Drenthe: 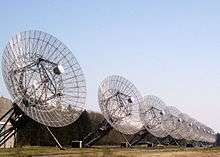 ASTRON, the Netherlands institute for radio astronomy, is located near Dwingeloo. Their single-dish radio telescope of the Dwingeloo Radio Observatory was completed in 1956 and is now a national heritage site (rijksmonument). Their Westerbork Synthesis Radio Telescope is an array of fourteen dishes near the village of Westerbork and construction was completed in 1970. Their international Low-Frequency Array with its core near Exloo was completed in 2012.

RTV Drenthe, the regional radio and television station, is based in Assen. The regional daily newspaper for the provinces of Drenthe and Groningen is Dagblad van het Noorden, which is based in the city of Groningen.