For other uses, see Groningen (disambiguation).

Groningen (Dutch pronunciation: [ˈɣroːnɪŋə(n)]; Gronings: Grönnen or Grunn; West Frisian: Grinslân) is the northeasternmost province of the Netherlands. It borders on Friesland to the west, Drenthe to the south, the German state of Niedersachsen (districts of Leer and Emsland) to the east, and the Wadden Sea to the north. In 2014, it had a population of 582,640 and a total area of 2,960 km2 (1,140 sq mi).

The area was subsequently part of Frisia, the Frankish Empire, the Holy Roman Empire, and the Dutch Republic, which is the precursor state of the Netherlands. In the 14th century, the city of Groningen became a member of the Hanseatic League.

The capital of the province and the seat of the provincial government is the city of Groningen. Since 2016, René Paas has been the King's Commissioner in the province. A coalition of the Labour Party, People's Party for Freedom and Democracy, Democrats 66, and ChristianUnion forms the executive branch. The province is divided into 23 municipalities.

The land is mainly used for agriculture. There are sea ports in Delfzijl and Eemshaven. The Groningen gas field was discovered in 1959. The province is home to the University of Groningen and Hanze University of Applied Sciences. 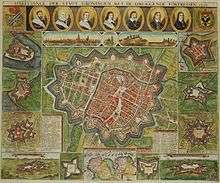 1652 map of the city of Groningen and the surrounding fortifications 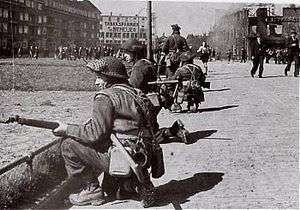 Canadian soldiers during the Battle of Groningen in April 1945

Groningen was originally a part of Frisia. It became a part of the Frankish Empire around 785. Charlemagne assigned the Christianization of this new possession to Ludger.

In the 11th century, the city of Groningen was a village in Drenthe that belonged to the Bishopric of Utrecht, while most of the province was in the Prince-Bishopric of Münster.

During the Middle Ages, central control was remote, and the city of Groningen acted as a city-state, exerting a dominating influence on the surrounding Ommelanden. In the 14th century, Groningen became one of the towns within the Hanseatic League.[3] In the years after, Groningen expanded its influence. At its peak almost all of the current province Friesland was under the influence and control of Groningen.

Shortly before 1498, Maximilian I, Holy Roman Emperor gave Groningen and Friesland to Albert III, Duke of Saxony, who could however not establish permanent control. In 1514/15 Groningen came to the Duchy of Guelders, and in 1536 as the Lordship of Groningen to the Habsburg Netherlands.

In 1594, Groningen was conquered by the Republic of the Seven United Provinces, precursor state of the Netherlands, to which it belonged henceforth.

During World War II, the Netherlands were occupied by Nazi Germany. In April 1945, the 2nd Canadian Division fought in the Battle of Groningen, which resulted in the liberation of the city and in the death of 130, the capture of 5,212, and the fleeing of 2,000 German soldiers. In May 1945, another 3,000 German soldiers were captured in the Battle of Delfzijl by the 5th Canadian Division, after which all of the northern provinces were liberated.[4]

East Groningen was the scene of a particularly fierce class struggle in the 19th and 20th centuries. Perhaps not coincidentally, Groningen boasts the only municipality (Beerta) where the Communist Party of the Netherlands has ever had a mayor (Hanneke Jagersma).[5] 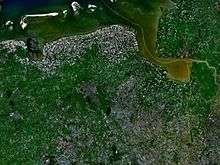 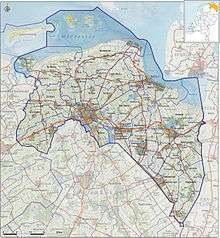 The land is flat and for 80% used for agriculture 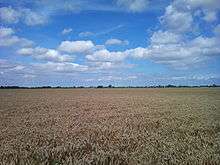 Mudflat hikers during low tide on the Wadden Sea near Pieterburen

The land in Groningen is flat. A large area of the province is below sea level.[7] The Hasseberg near Sellingen of 14.6 m (48 ft) above sea level is the highest point.[8]

The Groningen gas field near Slochteren is the 8th largest[9] natural gas field in the world. Since 1986, the exploitation of this gas field has caused earthquakes in the region with magnitudes up to 3.6.[10]

In the Wadden Sea of Groningen, a UNESCO World Heritage Site since 2009,[11] are the sandbank Simonszand and the natural reserve Rottum consisting of the three uninhabited islands Rottumeroog, Rottumerplaat, and Zuiderduintjes. The national park Lauwersmeer (IUCN category II) is located on the border between Groningen and Friesland.

The province of Groningen is also called Stad en Ommelanden, which means the city of Groningen and its surrounding lands, which are the historical regions of Fivelingo, Hunsingo, Oldambt, Westerkwartier, and Westerwolde.[12]

The province (Nomenclature of Territorial Units for Statistics or NUTS level 2) is divided into three COROP regions (NUTS level 3): East Groningen, Delfzijl and surroundings, and the rest of Groningen. The COROP regions are used for statistical purposes.[13]

The province of Groningen has an oceanic climate (Köppen climate classification: Cfb).

In 1999, a 59% majority of the population of Groningen was not affiliated with any religion; 29% was Protestant (15% Reformed and 14% Dutch Reformed; since 2004 united in Protestant Church in the Netherlands), 7% was Roman Catholic (Diocese of Groningen-Leeuwarden), and 6% had another religion.[25]

The University Medical Center is a major employer in Groningen

The other economically important area is the Ems delta with the sea ports of Delfzijl and Eemshaven.[26][32] In 2012, a total of 9,199 cargo vessels arrived at the two Groningen Seaports combined, 4,593 sea vessels and 4,606 inland vessels. The ports had a cargo throughput of 8,705,000 tonnes.[33] The chemical industry near Delfzijl is located at the Chemie Park in Farmsum, with factories of AkzoNobel, Lubrizol, and Teijin Aramid.[34] Both GDF Suez[35] and Nuon Energy[36] have a natural gas-fired power plant in Eemshaven, and Essent[37] is building a coal-fired power plant there.

In 1959, the Groningen gas field near Slochteren was discovered,[38] and the NAM started to exploit the field in 1963.[10] This caused Dutch disease and induced earthquakes.

In 2013, Groningen had a labor force of 268 thousand people and unemployment rate of 9.6%, which is the second highest unemployment for a province in the Netherlands.[39]

Groningen is home to the Low Saxon dialect called Gronings (Grönnegs / Grunnegs in Gronings regional language), In the eastern part of Friesland variations of the Groninger 'language' is spoken. Gronings has local nuances, for example, the people in the eastern part speak Gronings with more German influence. Nowadays, many inhabitants of the province don't speak the dialect, especially in the city of Groningen where many outsiders have moved.

Groninger Museum in Groningen in 2006

Museumhuis Groningen is an umbrella organization for museums and other heritage organizations in the province of Groningen and has 58 members.[40][41] The Groninger Museum is the most visited museum in the province with 209,195 visitors in 2015. The other museums and heritage organizations with more than 25 thousand visitors in 2015 are Fort Bourtange in Bourtange, Noordelijk Scheepvaartmuseum in Groningen, Ter Apel Monastery in Ter Apel, Fraeylemaborg in Slochteren, Nationaal Bus Museum in Hoogezand, and Museumspoorlijn STAR in Stadskanaal.[42]

Euroborg is the home stadium of FC Groningen

FC Groningen from the city of Groningen is the only football club from the province in the Eredivisie.[43] Their home stadium Euroborg has a capacity of 22,550 seats.[44] In the 2012–2013 competition, FC Groningen became 7th of the 18 teams.[45] SC Veendam played in the Eerste Divisie, but filed for bankruptcy in 2013.[46]

The city of Groningen is also the base of basketball club GasTerra Flames, volleyball club Lycurgus, and korfball club Nic..[47]

The ice rink at the multi-sport center Kardinge in the city of Groningen is used for national speed skating championships, most recently the 2013 KNSB Dutch Sprint Championships.[48] 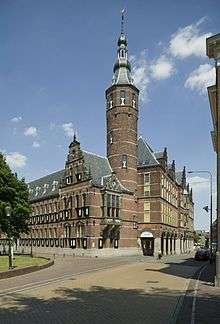 Seat of the provincial government in the city of Groningen

In the provincial elections of 2011, the Labour Party became the largest party with nearly 25% of the votes and 12 seats in the Provincial Council. The next three largest parties are the People's Party for Freedom and Democracy (VVD) and the Socialist Party (SP) with 6 seats each, and the Christian Democratic Appeal (CDA) with 5 seats.[52] In 2011, two months after the elections, the member of the Party for the North (PvhN) continued as an independent under the name Free Mandate.[53][54] The next provincial elections are planned for 18 March 2015.[55]

Following the 2011 elections, the Provincial Executive was formed by a coalition of the Labour Party, the People's Party for Freedom and Democracy, Democrats 66 (D66), and GreenLeft (GL).[56] In 2013, GreenLeft left the coalition and was replaced by the ChristianUnion (CU).[57] The Labour Party has three deputies, the other coalition parties have one deputy each.[58] 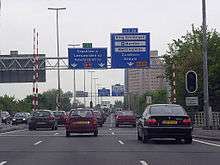 The N7 expressway near the city of Groningen

Railways in the northern provinces of the Netherlands in 2006 (without the Stadskanaal–Zuidbroek railway, which partially reopened in 2011)

The railway network in the Netherlands is maintained by ProRail.[66] There are six railways located partially or entirely in the province of Groningen. The railway station Groningen connects several of these railways.[67]

The international airport that serves Groningen is Groningen Airport Eelde, which is located in Eelde in the province of Drenthe. The airport is co-owned by the provinces of Groningen and Drenthe and the municipalities of Groningen, Assen, and Tynaarlo.[68] Its summer destinations are Antalya, Faro, Girona, Gran Canaria, Heraklion, Kos, Palma de Mallorca, and Tenerife. Its winter destinations are Innsbruck and Salzburg.[69] Starting on 5 June 2014, there will also be flights to London.[70] For other international destinations, Amsterdam Airport Schiphol is the nearest airport. The general aviation airports in the province are Oostwold Airport in Oostwold[71] and Stadskanaal Airfield in Stadskanaal.[72]

The University of Groningen in the city of Groningen was founded in 1614[73] and is the only research university (universiteit) in the province. On 1 September 2013, it had 29,407 students and 5,238 full-time equivalent of staff members.[74] The university has ten faculties: Arts, Behavioural and Social Sciences, Economics and Business, Law, Mathematics and Natural Sciences, Medical Sciences, Philosophy, Spatial Sciences, Theology and Religious Studies, and University College Groningen.[75]

The Dagblad van het Noorden is a regional daily newspaper based in the city of Groningen and is owned by NDC Mediagroep. It was founded in 2002 by merging the Nieuwsblad van het Noorden, the Groninger Dagblad, and the Drentse Courant.[76] In 2015, the newspaper had a circulation of 96,515.[77]

People from the province of Groningen: