Leeuwarden (Dutch pronunciation: [ˈleːʋ.ɑrdə(n)], Frisian: Ljouwert [ˈʎɔːw(ə)t], Stadsfries: Liwwadden) is a city and municipality with a population of 108,249 in Friesland in the Netherlands. It is the provincial capital and seat of the States of Friesland.

The oldest remains of houses in the city date back to the 2nd century AD. Leeuwarden has been permanently inhabited since the 10th century. It was granted city privileges in 1435. The city was liberated from German occupation in World War II by The Royal Canadian Dragoons in 1945. It is the economic hub of the province of Friesland, situated in a green and water-rich environment, with lakes, villages and recreational areas. Leeuwarden is a former royal residence and has a historic centre, many listed buildings, and a large shopping centre with squares and restaurants. Leeuwarden has been awarded the title European Capital of Culture 2018.

One important cultural and historical event is the Elfstedentocht (Eleven Cities Tour), an ice skating-tour of eleven cities in Friesland, starting and finishing in Leeuwarden.

Besides the city of Leeuwarden, population centres in the municipality with a population of 1,000 or more are Grou, Goutum, Wergea, Jirnsum, Reduzum, and Wirdum. The municipality is governed by the mayor Ferd Crone and a coalition of the Labour Party, Christian Democratic Appeal, and PAL-GroenLinks.

The name "Leeuwarden" (or older spelling variants) first came into use for Nijehove, the most important of the three villages that later merged into one, namely Oldehove and Hoek in the early 9th century (Villa Lintarwrde c. 825).[6] There is much uncertainty about the origin of the city's name. Historian and archivist Wopke Eekhoff summed up a total of over 200 different spelling variants, of which Leeuwarden (Dutch), Liwwadden (Stadsfries), and Ljouwert (West Frisian) are still in use.[7]

The second syllable is easily explained: Warden, Frisian/Dutch for an artificial dwelling hill, is a designation of terps, reflecting the historical situation.[7]

The first part of the name, leeuw, means lion in modern standard Dutch. This interpretation corresponds with the coat of arms adopted by the city, which features a heraldic lion. However, modern standard Dutch was not used in this region in the Middle Ages, when the city was called Lintarwrde. Some scholars argue that the name of the city is derived from leeu-, a corruption of luw- (Dutch for sheltered from the wind, cf. the maritime term leeward) or from lee- (a Dutch word for waterway). The last one suits the watery province of Friesland.[7] 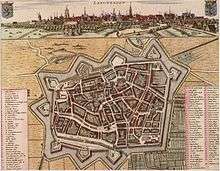 The oldest remains of houses date back to the 2nd century AD in the Roman era and were discovered during an excavation near the Oldehove.

The area has been permanently inhabited since the 10th century, and was mentioned as a city in German sources in 1285; city privileges were granted in 1435. Situated along the Middelzee, it was an active trade centre until the waterway silted up in the 15th century, making it harder to trade. 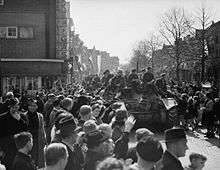 Citizens of Leeuwarden welcoming units of the Canadian Army, 16 April 1945

In 1901 the city had a population of 32,203. During World War II, after extensive occupation by the German forces, on 15 April 1945, The Royal Canadian Dragoons, disobeying direct orders, charged into the heavily defended city and defeated the Germans, who were driven out by the next day. The Royal Canadian Dragoons still fly the flag of the city of Leeuwarden wherever they are stationed.[8]

On Saturday 19 October 2013, a fire broke out in a clothes shop on a busy pedestrian street. The fire started late in the afternoon and destroyed over 15 shops and flats. Everyone on the street was evacuated as the blaze damaged dozens of properties. A 24-year-old man who was living in one of the flats died because the fire was not under control until Sunday morning. Due to this the fire burnt all through the night. The man called the fire brigade, before collapsing because the services could not reach him. The birthplace of Mata Hari was destroyed. The firemen took 4 and a half hours to put out the fire.[9] Leeuwarden has since renovated the street and shops in this area.

The coat of arms of Leeuwarden is the official symbol of the municipality of Leeuwarden. It consists of a blue escutcheon, a golden lion and a crown. The fact Leeuwarden carries a lion in its seal seems logical, considering that "Leeuw" is Dutch for "Lion". However, it is very plausible the oldest name of the city conceals an indication of water rather than an animal. Some sources tell the lion had been called into life after the name became official. It is also possible the coat of arms was a gift to the city from the powerful Minnema family.[10] 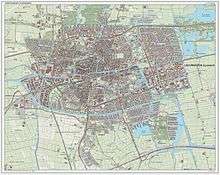 2014 map of the city of Leeuwarden

Leeuwarden consists of 19 population centres as of 1 January 2014 when parts of the former municipality of Boarnsterhim were added to Leeuwarden. 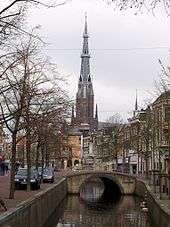 Leeuwarden's historic centre with the tower of the church of St. Bonifatius

Well-known buildings in the city centre include the Kanselarij (the former chancellery), the Stadhouderlijk hof, former residence of the stadtholders of Friesland, the Waag (old trade centre of the city), the Saint Boniface church and the leaning tower Oldehove. The tallest building in the city is the 115-metre Achmeatoren (Achmea insurance tower).

Leeuwarden is also the site of the country's largest cattle market, and on Ascension Day, the largest flower market in the Netherlands is held here. The Froskepôlemolen is the last surviving windmill of over 130 years old known to have stood in Leeuwarden. The remains of the Cammingha-Buurstermolen were demolished in 2000. The bases of two other windmills, Wielinga-Stam and De Haan also survived.[13]

The Slauerhoffbrug is a fully automatic bascule bridge named after Jan Jacob Slauerhoff. It uses two arms to swing a section of road in and out of place within the road itself. This movable bridge is also known as the ‘Flying’ Drawbridge. One of the main designers is Emile Asari.

Among these monuments are houses, churches, windmills, old warehouses, shops and offices but also parks, statues and the canals. The oldest monuments date back to the 13th century, including the 'Jacobijnerkerk', which is a monastery church. After the 13th century a lot of important buildings were built in Leeuwarden, hence the large number of national monuments. At the moment, there are still protected areas in and around Leeuwarden which are expected to have a high archaeological value. 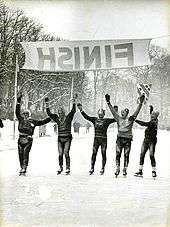 Finish of the Elfstedentocht in 1956

Leeuwarden is the starting and finishing point for the celebrated Elfstedentocht, a 200 km-long speed skating race over the Frisian waterways that is held when winter conditions in the province allow. As of 2015, it last took place in January 1997, preceded by the races of 1986 and 1985. In 1986 the Dutch king Willem-Alexander participated in the Eleven cities tour, with the pseudonym W.A. van Buren, which is the pseudonym of the royal family of The Netherlands. The city's local football team, Cambuur Leeuwarden plays in the Eredivisie. In the season 2005/06, the club narrowly escaped bankruptcy. Its Cambuurstadion opened in 1995. The football team has proposed plans for a new stadium in the east side of the city, which will cost €35 million.[14] The city's basketball team, Aris Leeuwarden plays in the Dutch Basketball League since 2004.

The Frisian Solar Challenge is a solar boat race that starts and finishes in Leeuwarden. The race starts in Leeuwarden, the capital of Friesland, and follows the classic route of the Eleven City Tour. Following the canals, rivers, and lakes, with the occasional portage, the race features 40 teams from eight countries, including Belgium, Germany, Great Britain, Luxembourg, the Netherlands, Poland, Sweden, and the one long-distance entry, a team from the Federal University of Rio in Brazil.

On September 6, 2013 Leeuwarden was voted European Capital of Culture for the year 2018. This was done by a jury of international members, and they all voted for Leeuwarden unanimously. The title of Lwd2018 is 'Iepen Mienskip'. 'Iepen' is the Frisian word for ‘open’, whereas 'Mienskip' represents the sense of community within Leeuwarden. Lwd2018 connects different kinds of communities with each other. This is why the slogan of Lwd2018 is Criss-Crossing Communities.

Since the winning of the title Cultural Capital the city has been able to show its ambitions to a bigger audience. Leeuwarden has gained an energy boost from the nomination and is working together with a lot of companies in order to get ready for the big event. More information about Leeuwarden Cultural Capital 2018 and all the events, activities and news can be found on www.2018.nl. 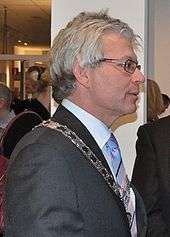 As provincial capital, Leeuwarden is also the seat of the King's Commissioner John Jorritsma and the States of Friesland.

Oryol in the Oryol Oblast in Russia is a sister city of Leeuwarden. Oryol or Orel (Russian: Орёл; IPA: [ɐˈrʲɵl], lit. eagle) is a city and the administrative centre of Oryol Oblast, Russia, located on the Oka River, approximately 360 kilometers (220 mi) south-southwest of Moscow. 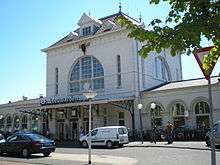 The Leeuwarden railway station is the main railway station of Leeuwarden. The station was finished on 27 October 1863. The first railway went from Leeuwarden to Harlingen. Nowadays, the station is a lot bigger and has facilities such as a supermarket, hairdresser, drugstore, bookstore and a flower shop. There are local, regional, and national trains connecting the city to the surrounding area, the neighboring provinces of Groningen and Drenthe, and the rest of the Netherlands.[17] The other stations in the municipality are Leeuwarden Achter de Hoven, Leeuwarden Camminghaburen, and Grou-Jirnsum. A fifth station Leeuwarden Werpsterhoek is planned to be opened in 2018.[18] 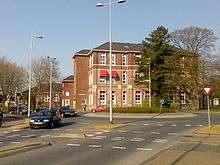 Leeuwarden has a number of respected universities of applied science (HBO in Dutch), such as the Van Hall Instituut (agricultural and life sciences), the Stenden University of Applied Sciences (hotel management, economical and media management)[21] and the NHL Hogeschool (economical, technical and arts).[22] Besides higher education, the city is also home to three regional vocational schools (MBO): the Friese Poort,[23] Friesland College,[24] and Nordwin College.[25]

Although the city has no scientific university, several dependencies are located here, including those of the Wageningen University, Universiteit Twente and the Rijksuniversiteit Groningen. About 16,000 students, among them an increasing number of foreign students, study at technical schools. Leeuwarden is also presenting itself more and more as a City of Science. The city invests in science, professional universities and in future development and research. Leeuwarden is proud of its collaborations with scientific institutes such as Wetsus (Water technology), Centre of Expertise Water technology (CEW), the Dairy Campus, the Wadden Academy and the University Campus Fryslan (UCF). On the science campus of Leeuwarden, three professional universities collaborate with students and businesses in projects where theoretical knowledge is linked to business practice.