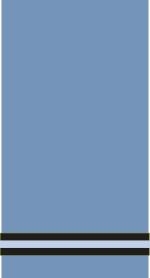 Flying officer (Fg Off in the RAF and IAF; FLGOFF in the RAAF; FGOFF in the RNZAF; formerly F/O in all services and still frequently in the RAF) is a junior commissioned rank in the Royal Air Force[1] and the air forces of many countries which have historical British influence. It is also sometimes used as the English translation of an equivalent rank in countries which have a non-English air force-specific rank structure. In these cases a Flying Officer usually ranks above pilot officer and immediately below flight lieutenant.

The equivalent rank in the Women's Auxiliary Air Force was "section officer".

The term "flying officer" was originally used in the Royal Flying Corps as a flying appointment for junior officers, not a rank.

On 1 April 1918, the newly created RAF adopted its officer rank titles from the British Army, with Royal Naval Air Service sub-lieutenants (entitled flight sub-lieutenants) and Royal Flying Corps lieutenants becoming lieutenants in the RAF. However, with the creation of the RAF's own rank structure on 1 August 1919, RAF lieutenants were re-titled flying officers, a rank which has been in continuous use ever since.

In the RAF, aircrew and engineer officers are commissioned directly into the rank of flying officer, while ground branches are commissioned as pilot officers for an initial period of six months. Time served in the rank of flying officer varies depending on branch before automatic promotion to flight lieutenant; aircrew and BEng qualified officers will serve for a period of 2½ years, MEng qualified engineers for 1½ years, and all other ground branches for 3½ years. A graduate entrant who has an MEng but is joining a ground branch other than engineer will serve 3½ years as a flying officer – the early promotion for MEng engineers is designed as a recruitment incentive. The starting salary for a flying officer is £30,616.80 per year.[3]

In many cases the rank of flying officer is the first rank an air force officer holds after successful completion of his professional training. A flying officer might serve as a pilot in training, an adjutant, a security officer or an administrative officer and is typically given charge of personnel and/or resources. By the time aviators have completed their training, they will have served their 2½ years and typically join their frontline squadrons as flight lieutenants.

The rank insignia consists of one narrow blue band on slightly wider black band. This is worn on both the lower sleeves of the tunic or on the shoulders of the flying suit or the casual uniform. The rank insignia on the mess uniform is similar to the naval pattern, being one band of gold running around each cuff but without the Royal Navy's loop.

The Royal Canadian Air Force (RCAF) used the rank until unification of the three armed services into the Canadian Forces in 1968 and army-type ranks were adopted. RCAF personnel holding this rank then switched to the rank of lieutenant. In official French Canadian usage, a flying officer's rank title was lieutenant d'aviation.[4]

The rank of "warrant flying officer" was also used by the air service of the Imperial Japanese military.