Food chain in a Swedish lake. Osprey feed on northern pike, which in turn feed on perch which eat bleak that feed on freshwater shrimp.

A food chain is a linear network of links in a food web starting from producer organisms (such as grass or trees which use radiation from the sun to make their food) and ending at apex predator species (like grizzly bears or killer whales), detritivores (like earthworms or woodlice), or decomposer species (such as fungi or bacteria). A food chain also shows how the organisms are related with each other by the food they eat. Each level of a food chain represents a different trophic level. A food chain differs from a food web, because the complex network of different animals' feeding relations are aggregated and the chain only follows a direct, linear pathway of one animal at a time. A common metric used to quantify food web trophic structure is food chain length. In its simplest form, the length of a chain is the number of links between a trophic consumer and the base of the web and the mean chain length of an entire web is the arithmetic average of the lengths of all chains in a food web.[1][2]

Food chains were first introduced by the African-Arab scientist and philosopher Al-Jahiz in the 9th century and later popularized in a book published in 1927 by Charles Elton, which also introduced the food web concept.[3][4][5] 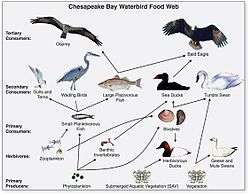 Food chains are directional paths of trophic energy or, equivalently, sequences of links that start with basal species, such as producers or fine organic matter, and end with consumer organisms. [6]:370

The food chain's length is a continuous variable that provides a measure of the passage of energy and an index of ecological structure that increases in value counting progressively through the linkages in a linear fashion from the lowest to the highest trophic (feeding) levels.[7] Food chains are often used in ecological modeling (such as a three species food chain). They are simplified abstractions of real food webs, but complex in their dynamics and mathematical implications.[8] Ecologists have formulated and tested hypotheses regarding the nature of ecological patterns associated with food chain length, such as increasing length increasing with ecosystem size, reduction of energy at each successive level, or the proposition that long food chain lengths are unstable.[7] Food chain studies have an important role in ecotoxicology studies tracing the pathways and biomagnification of environmental contaminants.[9]

Food chains vary in length from three to six or more levels. A food chain consisting of a flower, a frog, a snake and an owl consists of four levels; whereas a food chain consisting of grass, a grasshopper, a rat, a snake and finally a hawk consists of five levels. Producers, such as plants, are organisms that utilize solar or chemical energy to synthesize starch. All food chains must start with a producer. In the deep sea, food chains centered on hydrothermal vents and cold seeps exist in the absence of sunlight. Chemosynthetic bacteria and archaea use hydrogen sulfide and methane from hydrothermal vents and cold seeps as an energy source (just as plants use sunlight) to produce carbohydrates; they form the base of the food chain. Consumers are organisms that eat other organisms. All organisms in a food chain, except the first organism, are consumers.