Paradox of the plankton 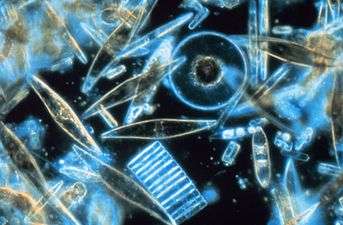 Marine diatoms are among the many planktonic organisms that paradoxically appear to flout the competitive exclusion principle.

In aquatic biology, the paradox of the plankton describes the situation in which a limited range of resources supports an unexpectedly wide range of plankton species, apparently flouting the competitive exclusion principle which holds that when two species compete for the same resource, one will be driven to extinction.

The paradox of the plankton results from the clash between the observed diversity of plankton and the competitive exclusion principle,[1] also known as Gause's law,[2] which states that, when two species compete for the same resource, ultimately only one will persist and the other will be driven to extinction. Phytoplankton life is diverse at all phylogenetic levels despite the limited range of resources (e.g. light, nitrate, phosphate, silicic acid, iron) for which they compete amongst themselves.

The paradox of the plankton was originally described in 1961 by G. Evelyn Hutchinson, who proposed that the paradox could be resolved by factors such as vertical gradients of light or turbulence, symbiosis or commensalism, differential predation, or constantly changing environmental conditions.[3] More recent work has proposed that the paradox can be resolved by factors such as: chaotic fluid motion;[4] size-selective grazing;[5] spatio-temporal heterogeneity;[6] and environmental fluctuations.[7] More generally, some researchers suggest that ecological and environmental factors continually interact such that the planktonic habitat never reaches an equilibrium for which a single species is favoured.[8] In Mitchell et al. (2008), researchers found that small-scale analysis of plankton distribution exhibited patches of aggregation, on the order of 10 cm, that had sufficient lifetimes (> 10 minutes) to enable plankton grazing, competition, and infection.[9]