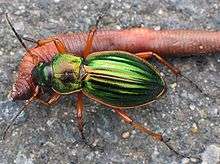 Interspecific interactions such as predation are a key aspect of community ecology.

In ecology, a community or biocoenosis is an assemblage or association of populations of two or more different species occupying the same geographical area and in a particular time. The term community has a variety of uses. In its simplest form it refers to groups of organisms in a specific place or time, for example, "the fish community of Lake Ontario before industrialization".

On a deeper level the meaning and value of the community concept in ecology is up for debate. Communities have traditionally been understood on a fine scale in terms of local processes constructing (or destructing) an assemblage of species, such as the way climate change is likely to affect the make-up of grass communities.[2] Recently this local community focus has been criticised. Robert Ricklefs has argued that it is more useful to think of communities on a regional scale, drawing on evolutionary taxonomy and biogeography,[1] where some species or clades evolve and others go extinct.[3]

Clements developed a holistic (or organismic) concept of community, as it was a superorganism or discrete unit, with sharp boundaries.

Gleason developed the individualistic (also known as open or continuum) concept of community, with the abundance of a population of a species changing gradually along complex environmental gradients, but individually, not equally to other populations. In that view, it is possible that individualistic distribution of species gives rise to discrete communities as well as to continuum. Niches would not overlap.[4][5]

In the neutral theory view of the community (or metacommunity), popularized by Hubbell, the abundance of a population of a species changes not because of the environmental conditions and its niche, which could overlap with others. Each population would have the same adaptive value (competitive and dispersal abilities), and local and regional composition and abundance would be determined primarily by stochastic demographic processes and dispersal limitation.

Species interact in various ways: competition, predation, parasitism, mutualism, commensalism, etc. The organization of a biological community with respect to ecological interactions is referred to as community structure.

Species can compete with each other for finite resources. It is considered to be an important limiting factor of population size, biomass and species richness. Many types of competition have been described, but proving the existence of these interactions is a matter of debate. Direct competition has been observed between individuals, populations and species, but there is little evidence that competition has been the driving force in the evolution of large groups.[6]

Predation is hunting another species for food. This is a positive–negative (+ −) interaction in that the predator species benefits while the prey species is harmed. Some predators kill their prey before eating them (e.g., a hawk killing a mouse). Other predators are parasites that feed on prey while alive (e.g., a vampire bat feeding on a cow). Another example is the feeding on plants of herbivores (e.g., a cow grazing). Predation may affect the population size of predators and prey and the number of species coexisting in a community.

Mutualism is an interaction between species in which both benefit. Examples include Rhizobium bacteria growing in nodules on the roots of legumes and insects pollinating the flowers of angiosperms.

Commensalism is a type of relationship among organisms in which one organism benefits while the other organism is neither benefited nor harmed. The organism that benefited is called the commensal while the other organism that is neither benefited nor harmed is called the host. For example, an epiphytic orchid attached to the tree for support benefits the orchid but neither harms nor benefits the tree. The opposite of commensalism is amensalism, an interspecific relationship in which a product of one organism has a negative effect on another organism.[8]

A major research theme among community ecology has been whether ecological communities have a (nonrandom) structure and, if so however to characterise this structure. Forms of community structure include aggregation[9] and nestedness.