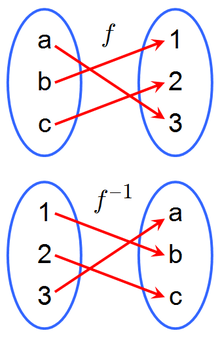 In mathematics, an inverse function is a function that "reverses" another function: if the function f applied to an input x gives a result of y, then applying its inverse function g to y gives the result x, and vice versa. i.e., f(x) = y if and only if g(y) = x.[1][2]

As a simple example, consider the real-valued function of a real variable given by f(x) = 5x − 7. Thinking of this as a step-by-step procedure (namely, take a number x, multiply it by 5, then subtract 7 from the result), to reverse this and get x back from some output value, say y, we should undo each step in reverse order. In this case that means that we should add 7 to y and then divide the result by 5. In functional notation this inverse function would be given by,

Not all functions have inverse functions. In order for a function f: X → Y to have an inverse,[3] it must have the property that for every y in Y there must be one, and only one x in X so that f(x) = y. This property ensures that a function g: Y → X will exist having the necessary relationship with f.

Let f be a function whose domain is the set X, and whose image (range) is the set Y. Then f is invertible if there exists a function g with domain Y and image X, with the property:

If f is invertible, the function g is unique,[4] which means that there is exactly one function g satisfying this property (no more, no less). That function g is then called the inverse of f, and is usually denoted as f −1.[5]

Not all functions have an inverse. For a function to have an inverse, each element y ∈ Y must correspond to no more than one x ∈ X; a function f with this property is called one-to-one or an injection. If f −1 is to be a function on Y, then each element y ∈ Y must correspond to some x ∈ X. Functions with this property are called surjections. This property is satisfied by definition if Y is the image (range) of f, but may not hold in a more general context. To be invertible a function must be both an injection and a surjection. Such functions are called bijections. The inverse of an injection f: X → Y that is not a bijection, that is, a function that is not a surjection, is only a partial function on Y, which means that for some y ∈ Y, f −1(y) is undefined. If a function f is invertible, then both it and its inverse function f−1 are bijections.

There is another convention used in the definition of functions. This can be referred to as the "set-theoretic" or "graph" definition using ordered pairs in which a codomain is never referred to.[7] Under this convention all functions are surjections,[8] and so, being a bijection simply means being an injection. Authors using this convention may use the phrasing that a function is invertible if and only if it is an injection.[9] The two conventions need not cause confusion as long as it is remembered that in this alternate convention the codomain of a function is always taken to be the range of the function.

The function f:ℝ → [0,∞) given by f(x) = x2 is not injective since each possible result y (except 0) corresponds to two different starting points in X – one positive and one negative, and so this function is not invertible. With this type of function it is impossible to deduce an input from its output. Such a function is called non-injective or, in some applications, information-losing.

If f is an invertible function with domain X and range Y, then

Using the composition of functions we can rewrite this statement as follows:

where idX is the identity function on the set X; that is, the function that leaves its argument unchanged. In category theory, this statement is used as the definition of an inverse morphism.

Considering function composition helps to understand the notation f −1. Repeatedly composing a function with itself is called iteration. If f is applied n times, starting with the value x, then this is written as f n(x); so f 2(x) = f (f (x)), etc. Since f −1(f (x)) = x, composing f −1 and f n yields f n−1, "undoing" the effect of one application of f.

While the notation f −1(x) might be misunderstood, (f(x))−1 certainly denotes the multiplicative inverse of f(x) and has nothing to do with the inverse function of f.

There is a symmetry between a function and its inverse. Specifically, if f is an invertible function with domain X and range Y, then its inverse f −1 has domain Y and range X, and the inverse of f −1 is the original function f. In symbols, for functions f:X → Y and f−1:Y → X,[14]

This statement is an consequence of the implication that for f to be invertible it must be bijective. The involutory nature of the inverse can be concisely expressed by[15]

The inverse of a composition of functions is given by[16]

Notice that the order of g and f have been reversed; to undo f followed by g, we must first undo g and then undo f.

For example, let f(x) = 3x and let g(x) = x + 5. Then the composition g ∘ f is the function that first multiplies by three and then adds five,

To reverse this process, we must first subtract five, and then divide by three,

If X is a set, then the identity function on X is its own inverse:

Single-variable calculus is primarily concerned with functions that map real numbers to real numbers. Such functions are often defined through formulas, such as:

A surjective function f from the real numbers to the real numbers possesses an inverse as long as it is one-to-one, i.e. as long as the graph of y = f(x) has, for each possible y value only one corresponding x value, and thus passes the horizontal line test.

The following table shows several standard functions and their inverses:

Formula for the inverse

Thus the inverse function f −1 is given by the formula

Sometimes the inverse of a function cannot be expressed by a formula with a finite number of terms. For example, if f is the function

then f is a bijection, and therefore possesses an inverse function f −1. The formula for this inverse has an infinite number of terms:

Graph of the inverse 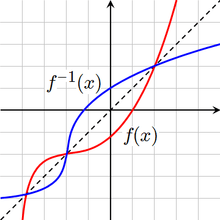 If f is invertible, then the graph of the function

is the same as the graph of the equation

This is identical to the equation y = f(x) that defines the graph of f, except that the roles of x and y have been reversed. Thus the graph of f −1 can be obtained from the graph of f by switching the positions of the x and y axes. This is equivalent to reflecting the graph across the line y = x.[18]

A continuous function f is invertible on its range (image) if and only if it is either strictly increasing or decreasing (with no local maxima or minima). For example, the function

Using Leibniz's notation the formula above can be written as

This result follows from the chain rule (see the article on inverse functions and differentiation).

then its inverse function converts degrees Fahrenheit to degrees Celsius,

for every C, and 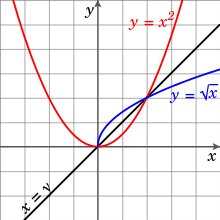 Even if a function f is not one-to-one, it may be possible to define a partial inverse of f by restricting the domain. For example, the function

(If we instead restrict to the domain x ≤ 0, then the inverse is the negative of the square root of y.) Alternatively, there is no need to restrict the domain if we are content with the inverse being a multivalued function: 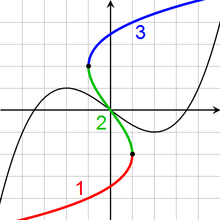 The inverse of this cubic function has three branches.

For a continuous function on the real line, one branch is required between each pair of local extrema. For example, the inverse of a cubic function with a local maximum and a local minimum has three branches (see the adjacent picture). 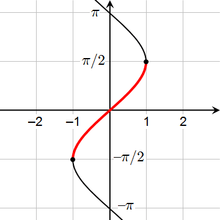 The arcsine is a partial inverse of the sine function.

These considerations are particularly important for defining the inverses of trigonometric functions. For example, the sine function is not one-to-one, since

That is, the function g satisfies the rule

Thus, g must equal the inverse of f on the image of f, but may take any values for elements of Y not in the image. A function f with a left inverse is necessarily injective. In classical mathematics, every injective function f with a nonempty domain necessarily has a left inverse; however, this may fail in constructive mathematics. For instance, a left inverse of the inclusion {0,1} → R of the two-element set in the reals violates indecomposability by giving a retraction of the real line to the set {0,1} .

That is, the function h satisfies the rule

Thus, h(y) may be any of the elements of X that map to y under f. A function f has a right inverse if and only if it is surjective (though constructing such an inverse in general requires the axiom of choice).

If f: X → Y is any function (not necessarily invertible), the preimage (or inverse image) of an element y ∈ Y is the set of all elements of X that map to y:

The preimage of y can be thought of as the image of y under the (multivalued) full inverse of the function f.

Similarly, if S is any subset of Y, the preimage of S is the set of all elements of X that map to S:

For example, take a function f: R → R, where f: x ↦ x2. This function is not invertible for reasons discussed above. Yet preimages may be defined for subsets of the codomain: