For other uses of "epic", see Epic (disambiguation). 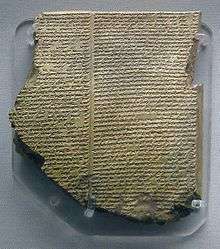 Tablet containing a fragment of the Epic of Gilgamesh

An epic poem, epic (from Latin epicus, from the Ancient Greek adjective ἐπικός, epikos, from ἔπος, epos,[1] "word, story, poem"[2]), epos (from Latin epos, from Greek ἔπος, epos[3]), or epopee (from French épopée, from neo-Latin epopoeia, from Ancient Greek ἐποποιία, epopoiia)[4] is a lengthy narrative poem, ordinarily concerning a serious subject containing details of heroic deeds and events significant to a culture or nation.[5] Milman Parry and Albert Lord have argued that the Homeric epics, the earliest works of Western literature, were fundamentally an oral poetic form. These works form the basis of the epic genre in Western literature. Nearly all Western epic (including Virgil's Aeneid and Dante's Divine Comedy) self-consciously presents itself as a continuation of the tradition begun by these poems. Classical epic employs dactylic hexameter and recounts a journey, either physical (as typified by Odysseus in the Odyssey) or mental (as typified by Achilles in the Iliad) or both. Epics also tend to highlight cultural norms and to define or call into question cultural values, particularly as they pertain to heroism.

Another type of epic poetry is epyllion (plural: epyllia), which is a brief narrative poem with a romantic or mythological theme. The term, which means "little epic", came into use in the nineteenth century. It refers primarily to the erudite, shorter hexameter poems of the Hellenistic period and the similar works composed at Rome from the age of the neoterics; to a lesser degree, the term includes some poems of the English Renaissance, particularly those influenced by Ovid. The most famous example of classical epyllion is perhaps Catullus 64.

Some of the most famous examples of epic poetry include the Ancient Greek Iliad and Odyssey, Virgil's Aeneid, the ancient Indian Ramayana and Mahabharata, Dante's Divine Comedy, the Portuguese Lusiads, and John Milton's Paradise Lost.

The first epics were products of preliterate societies and oral poetic traditions. In these traditions, poetry is transmitted to the audience and from performer to performer by purely oral means.

Early twentieth-century study of living oral epic traditions in the Balkans by Milman Parry and Albert Lord demonstrated the paratactic model used for composing these poems. What they demonstrated was that oral epics tend to be constructed in short episodes, each of equal status, interest and importance. This facilitates memorization, as the poet is recalling each episode in turn and using the completed episodes to recreate the entire epic as he performs it. Parry and Lord also showed that the most likely source for written texts of the epics of Homer was dictation from an oral performance.

Epic: a long narrative poem in elevated style presenting characters of high position in adventures forming an organic whole through their relation to a central heroic figure and through their development of episodes important to the history of a nation or race. (Harmon and Holman)

An attempt to delineate ten main characteristics of an epic:[6]

The hero generally participates in a cyclical journey or quest, faces adversaries that try to defeat him in his journey and returns home significantly transformed by his journey. The epic hero illustrates traits, performs deeds, and exemplifies certain morals that are valued by the society the epic originates from. Many epic heroes are recurring characters in the legends of their native culture.

Poets in literate societies have sometimes copied the epic format. The earliest surviving European examples are the Argonautica of Apollonius of Rhodes and Virgil's Aeneid, which follow both the style and subject matter of Homer. Other obvious examples are Nonnus' Dionysiaca, Tulsidas' Sri Ramacharit Manas.

There are many verse forms that were used in epic poems through the ages. Ancient European (Greek and Latin) poems were writen in dactylic hexameter.[7] Old English, German and Norse poems were written in alliterative verse[8] with alliteration[9] but usually without rhyme. Italian, Spanish and Portuguese long poems were usually written in terza rima [10] or especially ottava rima.[11] From 14th century English epic poems were written in heroic couplets,[12] and rhyme royal.[13] In 16th century Spenserian stanza[14] and blank verse[15] were introduced. In Polish literature alexandrine (13(7+6)), making heroic couplets, prevails.[16] In Russian four-feet iambic verse is the most popular.[17] In Serbian poetry decasyllable is the only one form employed.[18][19] 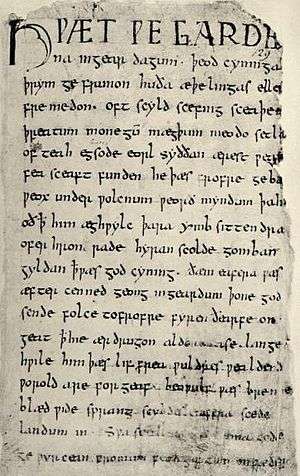 The first page of the Beowulf manuscript, 8th to 10th century.

8th to 6th century BC 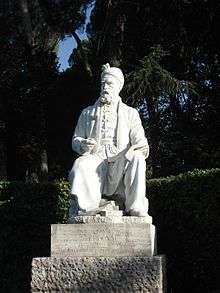 Statue of Iranian poet Ferdowsi in Rome, Italy. Ferdowsi's national epic Shahnameh played an important role in revival of Iranian patriotism and the Persian language after both were systematically suppressed by the Arab occupation of Iran 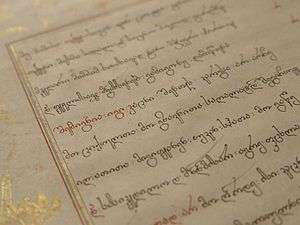 The Knight in the Panther's Skin by Shota Rustaveli, one of the greatest Georgian poets.