Versatile, with good offensive and tackling skills and also being capable of creating goals for teammates and himself, he played mainly for Valencia, and finished his career at Middlesbrough of England.[1] Over the course of ten seasons he amassed La Liga totals of 263 games and 48 goals.

Mendieta played 40 times with the Spanish national team, appearing with it in one World Cup and one European Championship.

Born in Bilbao, Basque Country, Mendieta made his professional debut at just 17 with CD Castellón, in Segunda División. After just one season he moved to La Liga after signing with Valencia CF, but spent the vast majority of his first year with the reserves, making his first team debut on 13 June 1993;[2] he played 34 of 42 games during the 1995–96 season as the side finished runners-up, its best result since 1990.

The 1997–98 campaign was Mendieta's breakthrough season, under new manager Claudio Ranieri. He played 30 league matches and scored ten goals, soon making his debut for the national team. In June 1999 he won his first trophy with Valencia, beating Atlético Madrid in the Copa del Rey.

Under new manager Héctor Cúper, Mendieta had an even better year in 1999–2000. He helped Valencia beat FC Barcelona 4–3 on aggregate to win the Spanish Supercup, and netted a career-best 13 goals as the Che finished third. However, the biggest triumph of the season was helping his team reach the final of the season's UEFA Champions League, a 0–3 loss to fellow league side Real Madrid; later, he was awarded the "European Midfielder of the Season" award.[3]

Valencia reached the final of the Champions League in the following year and lost it again, this time to FC Bayern Munich after a penalty shootout. Mendieta scored a penalty in normal time (1–1) and also converted his attempt in the shootout,[4] being again named "UEFA Best Midfielder of the Year".[5]

Mendieta was one of the most sought-after players in the 2001 off-season, eventually earning a €48 million transfer to Italian club S.S. Lazio, being at the time the sixth most expensive player of all time.[6] However, he disappointed in Serie A, spending only one year with the Rome club while failing to match the performances of departed playmakers Pavel Nedvěd and Juan Sebastián Verón.

Mendieta was loaned to FC Barcelona for the 2002–03 season[7] – he started most of the year, but the Catalans could only rank sixth – and subsequently he moved to Middlesbrough.[8]

In his first season at Middlesbrough, Mendieta was part of the team that won the Football League Cup, bringing the Teesside club its first ever silverware.[9] At the end of the season, the move was made permanent.

In his last two years at Middlesbrough, a string of injuries and long duration of regaining match fitness relegated Mendieta to the substitutes bench. He fell out of favour with manager Gareth Southgate, who made it clear that the player no longer featured in his first team plans. Reports suggested that Real Sociedad, Athletic Bilbao and Málaga CF were interested in purchasing the midfielder in the January 2007 transfer window, however no concrete agreement was ever made, and the transfer deadline passed amid speculation that the player was set for a move to Los Angeles Galaxy;[10] however, towards its end, he was quoted to have said that he would fight for his place at Middlesbrough. A day later, Boro's chief executive Keith Lamb disregarded his comments saying that there was "no chance" of him entering the first team. He played his last game on 26 December 2006, against Everton.[11]

On 5 December 2007, according to a Spanish newspaper,[12] Mendieta announced his retirement from professional football when his Middlesbrough contract expired at the end of the 2007–08 season,[13] He was finally released on 13 May 2008, ending a successful 17-year professional career.[14]

On 3 November 2009, Mendieta was quoted as saying a part of him would be interested in football management when interviewed by the BBC. He said: "A part of me can see the excitement and challenge of being a manager, definitely." After retiring, he settled with his family near Middlesbrough, in Yarm.[15]

In March/May 1996, Mendieta was part of the Spanish under-21 national team which was runner-up in the UEFA European Championship. He made his senior side debut on 27 March 1999, coming on as a substitute for Juan Carlos Valerón in a 9–0 thrashing of Austria for UEFA Euro 2000's qualifying stages; he was included in the list of 22 for the competition in Belgium and the Netherlands, helping the national side reach the last eight.[16]

Despite his form slump at Lazio, Mendieta was picked for the squad at the 2002 FIFA World Cup, scoring one goal in three matches for the eventual quarterfinalists, against South Africa (3–2 win).[17] The last of his 40 caps was gained in a friendly with Bulgaria in Granada, four months after the World Cup. 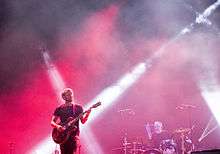 Mendieta was sponsored by sportswear company Nike, and appeared in commercials for the brand. In a global advertising campaign in the run-up to the 2002 World Cup in South Korea and Japan, he starred in a "Secret Tournament" commercial (branded "Scorpion KO") directed by Terry Gilliam, appearing alongside footballers such as Luís Figo, Thierry Henry, Hidetoshi Nakata, Roberto Carlos, Ronaldinho, Ronaldo and Totti, with former player Eric Cantona the tournament "referee".[18][19]