The UEFA European Under-21 Championship (also known as the UEFA Euro U-21s) is a football competition organised by the sport's European governing body, UEFA. It is held every two years. The competition has existed in its current form since 1978. It was preceded by the Under 23 Challenge Cup which ran from 1967 to 1970. A true Under 23 championship was then formed, starting in 1972.

The age limit was reduced to 21 for the 1978 championship and it has remained so since. To be eligible for the campaign ending in 2017, players need to be born in or after 1994. Many can be actually 23 years old by the time the finals tournament takes place; however, when the qualification process began (2015) all players would have been 21 or under.

Under-21 matches are typically played on the day before senior internationals and where possible, the same qualifying groups and fixtures were played out. This was not true for the shortened 2006-2007 Championship.

Sweden are the reigning champions, defeating Portugal in the 2015 final, on penalties. The finals of the 2015 competition were hosted by Czech Republic.

Up to and including the 1992 competition, all entrants were divided into eight qualification groups, the eight winners of which formed the quarter-finals lineup. The remaining fixtures were played out on a two-legged, home and away basis to determine the eventual winner.

For the 1994 competition, one of the semi-finalists, France, was chosen as a host for the (single-legged) semi-finals, 3rd place playoff and final. Similarly, Spain was chosen to host the last four matches in 1996.

For 1998, nine qualification groups were used, as participation had reached 46, nearly double the 24 entrants in 1976. The top seven group winners qualified automatically for the finals, whilst the eighth- and ninth-best qualifiers, Greece and England, played-off for the final spot. The remaining matches, from the quarter-finals onward, were held in Romania, one of the eight qualifiers.

The 2000 competition also had nine groups, but the nine winners and seven runners-up went into a two-legged playoff to decide the eight qualifiers. From those, Slovakia was chosen as host. For the first time, the familiar finals group stage was employed, with the two winners contesting a final, and two runners-up contesting the 3rd-place playoff. The structure in 2002 was identical, except for the introduction of a semi-finals round after the finals group stage. Switzerland hosted the 2002 finals.

Then followed the switch to odd years. The change was made because the senior teams of many nations often chose to promote players from their under-21s team as their own qualification campaign intensified. Staggering the tournaments allowed players more time to develop in the under-21 team rather than get promoted too early and end up becoming reserves for the seniors.

The 2007 competition actually began before the 2006 finals, with a qualification round to eliminate eight of the lowest-ranked nations. For the first time, the host (Netherlands) was chosen ahead of the qualification section. As hosts, Netherlands qualified automatically. Coincidentally, the Dutch team had won the 2006 competition - the holders would normally have gone through the qualification stage. The other nations were all drawn into fourteen three-team groups. The 14 group winners were paired in double-leg play-off to decide the seven qualifiers alongside the hosts.

From 2009 to 2015, ten qualification groups were used, with the group winners and four best runners-up going into the two-legged playoffs.

The 2015 finals will be the last eight-team finals as it will be expanded to twelve teams starting from 2017.[1]

This was competed for on a basis similar to a boxing title belt. The holders played a randomly chosen opponent for the championship. This format was soon dropped in favour of one that is more familiar to the sport of football.

Held only three times before it was relabelled by UEFA. 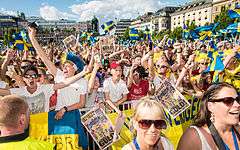 The Golden Player award is awarded to the player who plays the most outstanding football during the tournament.

The UEFA European Under-21 Championship adidas Golden Boot award will be handed to the player who scores the most goals during the tournament. Since the 2013 tournament, those who finish as runners-up in the vote receive the Silver Boot and Bronze Boot awards as the second and third top goalscorer players in the tournament respectively.