Gangneung is a city in Gangwon-do, on the east coast of South Korea. It has a population of 229,869 (as of 2006).[1] Gangneung is the economic centre of the Yeongdong region of Gangwon Province. Gangneung has many tourist attractions, such as Jeongdongjin, a very popular area for watching the sun rise, and Gyeongpo Beach. There is a ROK airbase south of downtown Gangneung which formerly doubled as a civil airport.[2]

On 18 September 1996 a North Korean submarine ran aground near Gangneung in an attempted infiltration mission, spurring a 49-day manhunt for the escaped passengers. For more details, refer to the 1996 Gangneung submarine infiltration incident.

The flag of the city shows a red sun in the centre and blue wave in front, on a white background. The sun represents the sunrise, the wave the sea. The flower of the city is the crepe myrtle, the tree of the city is the pine tree, its bird the swan. The animal of Gangneung is the tiger.[3] 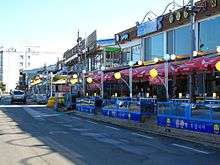 Inside the Gyeongpodae pavilion, built with 28 pillars, is the Gyeongpodaebu, a poem by Yul Gok. Gyeongpodaebu describes the movement of the heavens and the moon. The best view of the moon is on the 15th of the lunar month.[4]

The nearby Gyeongpo Beach has a sandy beach and a line of fresh seafood restaurants, with its proximity to Seoul making it a popular summer destination.

Sunrises, especially the first in the New Year, are important in traditional Korean culture. The Jeongdongjin and Gyeongpo beaches in Gangneung are popular places to enjoy a sunrise.[5]

Gangneung has numerous festivals. The biggest and most famous is the Gangneung Dano Festival (강릉단오제) at the Dano fairground near the Namdae River. In 1967, the Gangneung Dano Festival was designated Korean National Immaterial Cultural Heritage No. 13. On November 11, 2005 it was designated by UNESCO as a "Masterpieces of the Oral and Intangible Heritage of Humanity". Nowadays, it is a combination of several commemoration rites and traditional plays. A highlight is the traditional Gwanno Mask Dance (Gwanno Gamyeongeuk) which is only performed at this festival.

In addition to well established festivals like the Dano, there are several newer festivals in Gangneung, such as the IJAF (International Junior Art Festival) enjoys great popularity. The IJAF is a cultural festival for youth from all over the world. The festival includes both performances of the participating groups and a diversified cultural program demonstrating the essence of Korean culture. Since 2002, the IJAF takes place at Gyeongpo Beach in the end of July. Also, the Gyeongpo Rock Festival was established in 2006. This festival, mostly attracting young people, offers young Korean bands from the Gangneung area a stage for their performances.

There are a number of historical remains and museums in Gangneung. The most prominent being the Ojukheon Museum, which is named after a special black bamboo growing in this area. It is the birthplace of the famous Korean scholar Yulgok (1536–1584) (whose image is on the South Korean 5,000 Won note) and his mother Saimdang (1504–1551) (whose image is on the 50,000 Won note.) In 1963, the Ojukheon Museum was designated as National Cultural Heritage No. 165. It includes one of the oldest wooden buildings in Korea. Several shrines and old residential buildings deliver insight into the lives of these famous Koreans. Next to the Ojukheon Museum there is the Gangneung Municipal Museum which shows folklore and antique pieces from the history of the city. Located in the hills surrounding Gangneung City, there is the revealing Daegwallyeong Museum. It consists of a private collection with more than 1000 artifacts and shows the agricultural history of the region.

Gangneung experiences a humid subtropical climate (Köppen Cfa) with cool to cold winters and hot, humid summers. Since Gangneung is coastal city, the city is generally milder winters and relatively cooler summers than the rest of Korea.It is bordered by mountains to the west and the sea to the east.[6]

The city will be the venue for the indoor sports of the 2018 Winter Olympics and the 2018 Winter Paralympícs in Pyeongchang. All these facilities, except for the Gangneung Curling Centre will be newly built for the Olympics.

The city will also host an Olympic Village for the athletes and a media village.