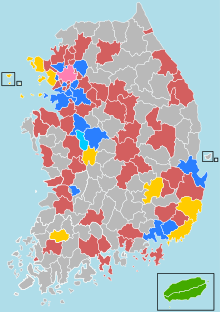 Claimed cities of the Committee for the Five Northern Korean Provinces