Geoje is a city located in South Gyeongsang province, just off the coast of the port city of Busan, South Korea. Daewoo Shipbuilding & Marine Engineering (former Daewoo Shipyard) in Okpo and Samsung Heavy Industries (SHI) in Gohyeon are both located on Geoje Island. The city also offers a wide range of tourist sights. The city is made up of a number of islands, of which by far the largest is Geoje Island. There are multiple dong in the city: Jangpyeongdong, Okpo-dong and Gohyeon.

Geoje has a history stretching back thousands of years. Various artifacts dating back to the Neolithic era have been found at archaeological digs on Naedo, Sandaldo, and Isudo. While no written history can be found from this era, the digs show evidence of numerous small establishments along the coasts. The first written mention of Geoje appears as, Geoje being one of two main divisions of the Dokro kingdom, a member of the Byeonhan confederacy(circa 0-300 AD). The Byeonhan confederacy slowly gave way to the Gaya confederacy(42-562 AD). The Gaya eventually submitted to the Kingdom of Silla.

In 757, Gyeongdeok of Silla classified the island as "Geoje-gun" "거제군" (Geoje county). Modern Geoje is classified as a "si" (시) (city). In 1170, Uijong of Goryeo secretly escaped to Geoje when Jeong Jung-bu raised a rebellion against him, instating his brother, Myeongjong as king. Geoje served as a strategic location in preparation of the naval forces for the Gihae Eastern Expedition (기해동정) of Tsushima Island in 1419 by the Korean general Yi Jong Mu. At the time of the Seven-Year War in 1592, admiral Yi Sun-sin gained a great naval victory against Japanese invaders near the town of Okpo in Geoje. Since then. Yi was referred to by his noble title, "Chung Mu Gong," which roughly translates into English as "Earner of Great National Respect."

In the Korean War (1950–53), the military government of General Douglas MacArthur used the island as a place for the settlement for 170,000 POWs, and a prison war camp measuring at 11.8 square kilometres (4.6 sq mi) was established during these years. After the war, a portion (23,000 m2) was converted into a tourist attraction.[1]

The Geneva Convention of 1949 failed to foresee to the development of hardcore, organized prisoner groups on Geoje-do in 1951-52 or to provide protection for the captor nation in dealing with stubborn resistance, mainly as a result of the harsh treatment that the prisoners received from the military government.

During the last few decades Geoje has emerged as leader in the shipbuilding industries. Due to the continued industry, Geoje largely escaped the negative impacts of the Asian market crash of 1997.

Some notable people from Geoje include:

According to the whitebook published by Geoje City in May 2014, Geoje had a population of 243,736, 12,240 of which are foreigners (non-Koreans). A significant portion of the population depends on shipbuilding to support their livelihood, and this can be evidenced by the fact that nearly 33% of workers are employed in the shipbuilding industry.

Geoje offers a variety of attractions, including Haegeumgang island, Oedo, a marine western-style botanical garden in Hallyeo-Haesang National Park, built by Lee Chang-ho and his wife when they settled on the island in 1969. Visitors visit by ferry boat from the harbor neighboring the islands.

Tourists also visit Jisim-do for trekking. Jisim is known for its Camellia vegetation. However, the Maemi typhoon in 2003 severely affected the island's plant life. Another popular tourist attraction at Haegeumgang-do (located southeast of Geoje) is the Sipja Donggul Cave. Buddhist and Shamanist sculptures can be found in the cave.

Geoje is the second largest island in Korea, so discovering these locations is most easily done using a tourist map. 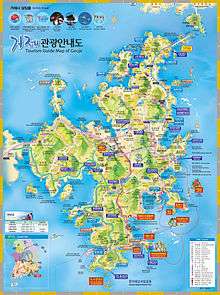 Geoje POW Camp (거제도포로수용소) was a prisoner of war detention camp for captured North Koreans established during the Korean war from (1951). It was the site of a prison riot on May 8, 1952, which is the topic of Chinese-American writer Ha Jin's fictional War Trash.[2] 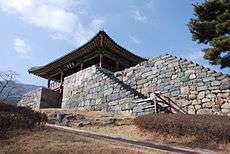 Gohyeon Castle is named the 46th national treasure of South Gyeongsang Province. Gohyeon Castle (고현성) and is located in Gohyeondong, Geoje city. It was established during the Joseon dynasty in 1451.

In the famous Joseon era geography book, Donggukyeojiseungram (동국여지승람), it was recorded that the Gohyeon castle had a circumference of 3,038 Cheok (척) (equivalent to about 9.2 km), and had a height of 13 Cheok (3.93m). It was considered the largest castle in the South Sea.[3] 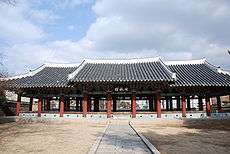 The Geoje Township Government Office is regarded as Korea's 84th cultural treasure. During the time of the Japanese invasions, the office was established in 1470 to administer all military and shipbuilding plans. 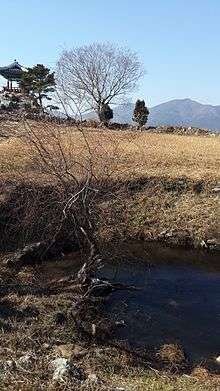 The Oksangeum Fortress Area (옥산금성지) was an unsanctioned fortress built on the Sujeong peak to defend against Japanese invasion. Due to the strain it placed on the people during the building, the magistrate responsible was dismissed. Oksangeum Fortress is regarded as the South Gyeongsang Province's 10th cultural treasure. 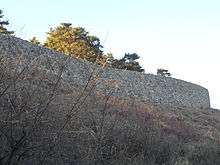 Pyewang Fortress (폐왕성) is the oldest surviving fortress in Geoje. First built during the Silla Dynasty, Pyewang fortress later served the fortress refuge for the King Uijong the 18th king of the Goryeo dynasty, while escaping from a military coup. Pyewang fortress is located in Dundeok-myeon. Pyewang fortress is regarded as the South Gyeongsang Province's 11th cultural treasure, and National Historical Site no. 509.

Okpo Great Victory Park is located in Okpo2Dong within Geoje city. It commemorates the great victory over the invading Japanese navy by the honored general Lee Sunshin on May 7, 1592.[4]

The Blue Horse (Cheongma, 청마) is a cultural exhibition and preserved birthplace museum of the celebrated poet "Blue Horse". It is located in Bangha village, Dundeokmyeon.

Jisimdo (지심도) is an island of the east coast of Geoje. It is visited primarily for its vast amount of Camellia vegetation. Although damaged by Maemi typhoon, the camellias have mostly returned. It is also a site of a Japanese military installation, from the occupation of the early 20th century.[5] 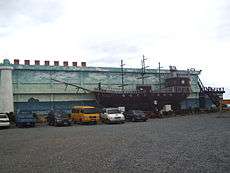 The Fishing Village Folk Museum covers two floors, including 4 exhibits: "The living sea/Traditions of the sea" and "Ocean experience/Renaissance of the sea".

Geoje Museum (거제박물관) is located in Okpo. It features local artifacts used over the centuries by the people of Geoje.

The Hill of Wind (바람의 언덕) is located in Galgot village, Nambumyeon.(거제시 남부면 갈곶리) It overlooks South Sea and there is a strong wind. A windmill is set on top of hill. It became famous after 2 Days & 1 Night, where one of the most popular Korea TV shows was filmed.[6]

Haegeumgang (해금강) is named for resemblance of the famous Haegeum mountain in North Korea. It is one of the most famous tourist destinations in all of Geoje.[7] 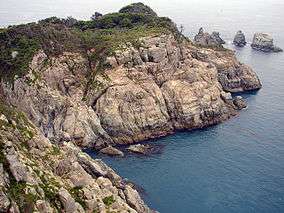 Oedo (외도)[8] and Naedo (내도)[9] are two islands located in the southeast of Geoje island and of the two, Oedo hosts the second most visited attraction in all of Geoje, the expansive botanical gardens of Botania.

Sanbangsan Botanical Garden (산방산비원) is a botanical garden in Sanbang-ri. This garden has many flower and tree varieties. Due to its remote location, it is much less busy than other botanical gardens.[10]

Mundong Waterfall (문동폭포) is a small waterfall located above the Mundong Reservoir. It features trails and picnic areas at this location.[11]

Gonggoji (공곶이) is a mountain side garden located opposite Naedo island. It features Camellia trees, and daffodil fields. Due to there being no road access, you must walk to get to this location.[12] 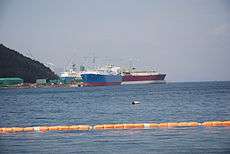 There are various Shipbuilding docks which provide tours from the Daewoo and Samsung corporation located in both Gohyeon and Okpo.[13]

Daemyeong Resort is located in Ilun-myeon. It has various rooms. It offers a choice of several restaurants, karaoke rooms, billiards, table tennis and other entertainment options. There also the Ocean Bay Water Park on location, and the Marina Bay offers yacht and motor boat rentals.[14]

Geoje offers an abundance of trails that can be used to hike, cycle, and some are suitable for ATV use.

According to a 2014 study, Geoje's Korean population was 243,736, and the foreign national population was 12,240.[15] Although Gohyeon-dong is the fifth smallest of the dongs, it is the largest in population at 40,400. The cumulative area of Geoje is 402.3㎢, with Dongbu-myeon (동부면) being the widest, and Majeon-dong (마전동) being the narrowest.

The industrial area of Geoje has the highest man to women worker ratio in Gyeongsangnamdo.

Geoje city covers an area of 401.63 square kilometres (155.07 sq mi), encompassing Geoje-do (383.44 square kilometres (148.05 sq mi)) and 60 other small islets, of which 10 are inhabited.[17] The main island is joined to land by two bridges from nearby Tongyeong. It is also connected via a series of bridges and underwater tunnels to Gadeok (가덕), then Busan (부산), named the Geoga Great Bridge(거가대교). A proprosal has been made to connect Geoje to Masan(마산) by another set of bridges and tunnels named Yi Sun-sin Great Bridge (이순신대교).

Geoje experiences a temperate climate, and temperatures reaching below zero degrees Celsius in winter are frequent during December to February. However, the island is kept relatively warm by the influence of warm ocean currents.

Due to Geoje's coastal sub-tropical location, the area grows and harvests several different crops, some of which are uncommon in most of Korea. Some of these crops include yuja, pineapples, and mushrooms.

Being an island also provides an abundance of seafood that is collected locally.