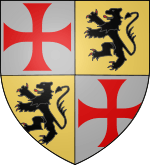 Gerard of Ridefort is thought probably to have been of Flemish origin, although some nineteenth-century writers suggested an Anglo-Norman background, apparently through misreading his designation as "of Bideford". It is uncertain when he arrived in the Kingdom of Jerusalem. He appears in the charter record in the service of Baldwin IV of Jerusalem in the late 1170s, and by 22 October 1179 held the rank of Marshal of the kingdom.

It seems that he expected Raymond III of Tripoli to give him the hand of an available heiress. However, when Cécile Dorel inherited her father's coastal fief of Botrun in the County of Tripoli, Raymond married her (before March 1181) to Plivain or Plivano, the nephew of a Pisan merchant, for a bride price of 10,000 bezants. By the mid-thirteenth century, when the Old French Continuation of William of Tyre (the so-called Chronicle of Ernoul) was compiled, the story of the bride of Botrun had evolved into a fanciful legend in which Plivain's uncle put the young lady (there renamed Lucie) on the scales, and offered Raymond her weight in gold, to obtain the marriage.

Gerard fell seriously ill, after which he took vows as a Templar. By June 1183 he held the rank of seneschal of the Order. He was elected Grand Master in late 1184 or early 1185, after the death of Arnold of Torroja in Verona.

Gerard continued to hold a grudge against Raymond of Tripoli, which influenced some of his political manœuvrings. In 1186, when Baldwin V of Jerusalem died, Gerard took the side of Queen Sibylla and her husband Guy of Lusignan in the ensuing succession struggle. Raymond and his allies the Ibelin family were the leaders of the opposing faction, who supported the claim of Sibylla's younger half-sister Isabella.

In the crisis of 1187, Gerard used the money sent by Henry II of England and deposited with the Templars in Jerusalem to hire additional troops for the arrière ban to defend the Kingdom of Jerusalem from Saladin. (Henry had sent the funds for his own future crusading plans, in penance for the murder of Thomas Becket: some of it was deposited with the Templars, some with the Hospitallers, in Jerusalem and Tyre). Gerard and fewer than 100 Templars, together with some Hospitallers, attacked Saladin's son al-Afdal at the Battle of Cresson; al-Afdal, however, had over 5,000 men. The Hospitaller Grand Master Roger de Moulins was killed; Gerard, though wounded, was one of the few survivors. Gerard's report of the battle was the source for a short narrative written by Pope Urban III to Baldwin of Exeter, archbishop of Canterbury.

In July of the same year Gerard led the Templars at the Battle of Hattin. Saladin had captured Tiberias and Guy was contemplating a march on the city to retake it. Raymond advised him to wait for Saladin to come to them, since they were in a well-defended, well-watered position, and would have to cross a dry open plain to reach Tiberias. Gerard opposed this, and convinced Guy to continue the march. He was supported by Raynald of Châtillon, a fellow enemy of Raymond.

The armies of Outremer ended up trapped on the dry plain and were defeated on 4 July. Raymond and several other nobles escaped, but Gerard, Guy, and Raynald were captured by Saladin. The rest of the Templar prisoners were executed. Gerard remained a prisoner until 1188, during which time his Order was commanded by Brother Thierry (Terricus) from Tyre.

Gerard was given the condition by Saladin that, if he could convince a Templar fortress to surrender peacefully, he would be set free. He succeeded and on his release went to Tortosa, where he ably led the Templars' defence of their castle, which held out after the fall of the town to Saladin's siege forces. Having taken back control of his order from Thierry, he seems to have seized the remainder of Henry II's money which had been left with the Templars in Tyre. This provoked a complaint from the city's defender, Conrad of Montferrat, in letters of 20 September 1188 to Baldwin of Exeter and Frederick Barbarossa: "...graver still, the Master of the Temple has made off with the King of England's alms".

In 1189, he again joined forces with Guy, taking the Templars to the Siege of Acre. He was beheaded after being taken prisoner by Saladin again on 4 October 1189.

This article is issued from Wikipedia - version of the 3/28/2016. The text is available under the Creative Commons Attribution/Share Alike but additional terms may apply for the media files.