Brown is a member of Drapac Professional Cycling, which is an Australian UCI Professional Continental cycling team, and also of the Randwick Botany Cycling Club.

Brown's greatest success as a road cyclist has been in the Tour de Langkawi in Malaysia, including a record breaking 5 stage wins in 2005 and winning the Points Classification in 2003 and 2005.

As a track cyclist he won a gold medal at the 2004 Summer Olympics in Athens as a member of the team pursuit (with Bradley McGee, Brett Lancaster, and Luke Roberts) in world record breaking time of 3:58.233. He also won a gold medal with Stuart O'Grady for the Madison event at the 2004 Summer Olympics. At the 2002 Commonwealth Games in Manchester he won two gold medals: for the Team pursuit, and the Scratch Race.

Brown was an Australian Institute of Sport scholarship holder.[2]

At a hearing before the Court of Arbitration for Sport cyclist Mark French gave sworn evidence that named Shane Kelly, Sean Eadie, Jobie Dajka and Graeme Brown were riders who often injected vitamins and supplements in his room.[3][4] 13 ampoules labelled EquiGen (equine growth hormone, an illegal doping agent), syringes and vitamins had been discovered by cleaners outside French's boarding room at the Australian Institute of Sport.[4] On testing some of the syringes were also found to contain the EquiGen hormone.[4] French's lifetime ban was ultimately exonerated on appeal and Brown himself was never charged with any offense.

Brown hails from Menai, an outer suburb of Sydney. He is married to former Australian women's cycling representative Hayley Rutherford.

Brown was awarded the Order of Australia Medal (OAM) in the 2005 Australia Day Honours List. Other awards include NSW cyclist of the year. 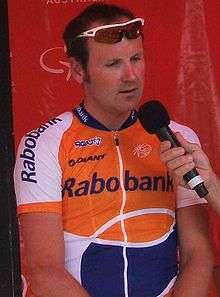