Peter Kennaugh MBE (born 15 June 1989) is a Manx professional racing cyclist[1] who currently rides for UCI ProTour team Team Sky.[2] In 2012 he won the gold medal as part of the Great Britain Team Pursuit team at the 2012 Summer Olympics becoming the first Manxman in 100 years to win gold.[3]

He became a member of British Cycling's Olympic Academy in 2008, moving with the rest of the squad to live in Tuscany, Italy.[6] In 2008 he came second in the senior national road race championships thus becoming the British under 23 champion. In February 2009 he became the British madison champion partnering Mark Christian.[7]

On 9 September 2009, it was announced that Kennaugh would turn professional in 2010, riding for the new British professional Team Sky.[8] He was described by Cycling Weekly as "the most talented youngster to roll off the Isle of Man production line since his friend and star sprinter Mark Cavendish".[6] 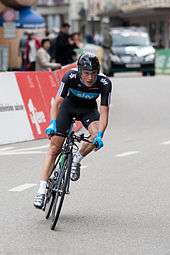 Kennaugh at the 2010 Tour de Romandie

In 2010, he focused on track cycling, winning the individual pursuit and scratch race at the national track championships. He finished second to Sky teammate Geraint Thomas in the national road race championships. Kennaugh made his grand tour debut in the Vuelta a España, but Sky withdrew following the death of soigneur Txema Gonzalez.[9]

In 2011, Kennaugh was a last minute replacement for Serge Pauwels in the Giro d'Italia,[10] and finished 86th in his first Giro. Kennaugh finished third overall in the Route du Sud, but was not selected for the 2011 Tour de France. He came in third behind teammates Bradley Wiggins and Geraint Thomas in the national road race championships.[11] In August, he finished fifth overall in the Tour de Pologne.[12]

In 2012, he began focusing on track cycling. He was part of the four-man Great Britain pursuit team that set a new world record time of 3:53.295 seconds to win gold in the track world championships on 4 April 2012 in Melbourne.[13] That achievement however was bettered on 3 August when he formed part of the Team GB pursuit team alongside Ed Clancy, Geraint Thomas, Steven Burke, that not only took Gold at the Summer Olympics but, with a time of 3:51.659, shattered their own world record that they had set in qualifying.[14][15] Kennaugh was the first Manxman to win an Olympic gold since 1912.

Kennaugh was appointed Member of the Order of the British Empire (MBE) in the 2013 New Year Honours for services to cycling.[16][17] 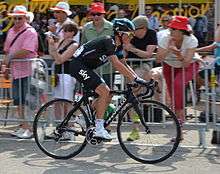 Kennaugh on stage fifteen of the 2013 Tour de France

Kennaugh focused fully on the road in 2013. He played a supporting role in Chris Froome's overall victory at the Tour of Oman in February. Kennaugh was part of the Sky team that won the team time trial at the Giro del Trentino in April, but he was not selected to ride the Giro d'Italia. Instead, Kennaugh won the Lincoln Grand Prix before playing a key role as a mountain domestique as Froome and Richie Porte took a 1–2 overall in the Critérium du Dauphiné in June. He was selected to ride the Tour de France for the first time. On Stage 8, Kennaugh played a key role in Chris Froome's stage victory by helping to bring back a dangerous move by Nairo Quintana on the Port de Pailhères, the subsequent descent and beginning of the final climb to Ax 3 Domaines. However, on the following stage, Kennaugh was involved in a dramatic crash as Ryder Hesjedal,[18] a Garmin–Sharp rider, knocked into him, sending him down a ravine and into vegetation next to the road. Although Kennaugh was not badly injured, the time lost meant he was unable to follow several subsequent attacks as Froome was left completely isolated.[19] 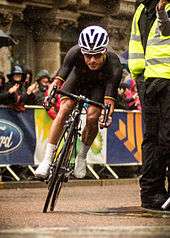 Kennaugh took his first individual professional win on the road at the Settimana Internazionale di Coppi e Bartali in March, winning the second stage at Sogliano al Rubicone, after going clear on the last climb of the day with Francesco Bongiorno of the Bardiani–CSF team and out-sprinted him for the honours. Kennaugh went on to win the race by 12 seconds ahead of team-mate Dario Cataldo, who had taken 48 seconds out of him in the final 10 km (6.2 mi) individual time trial.

In May 2014 Kennaugh broke Mark Cavendish's 2007 Isle of Man 10-mile time trial record by 30 seconds, setting a new record of 19m 38.982s at Ballamoar.[20] Kennaugh won the British National Road Race Championships on 29 June, outsprinting Sky teammate Ben Swift in Abergavenny.[21] Despite his good form Kennaugh was not selected for the Tour de France, instead riding the Tour of Austria, where he won the first stage and held the leader's jersey for the rest of the race to take his second stage race victory of the season.[22] Kennaugh then competed for the Isle of Man at the Commonwealth Games in Glasgow, winning a silver medal in the points race on the track[23] and eighth in the road race after a long solo breakaway attempt.[24] Kennaugh rode the Vuelta a España, helping Chris Froome finish second overall. 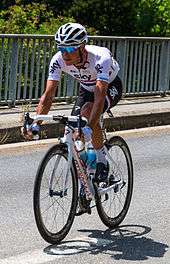 Kennaugh at the 2015 Tour de France in his National champions jersey.

Kennaugh won the opening stage of the Critérium du Dauphiné after attacking on the final climb and holding off the charging main field by two seconds on the descent into the finish in Albertville.[25] Kennaugh lost the race lead after the team time trial on Stage 3, but then helped Chris Froome win the event overall.

In June, he won the National Road Race Championships, distancing Mark Cavendish on the final cobbled climb[26] and becoming the first rider to successfully defend the title since Roger Hammond in 2004.[27] He was selected to ride the 2015 Tour de France, but struggled with illness and withdrew on Stage 16.[28]

In September, Kennaugh broke Chris Boardman's time trial record for the 37.73 mile Snaefell Mountain Course used for the Isle of Man TT by six seconds, riding a standard racing bicycle.[29] Boardman had recorded a time of 1hr 23min 54secs in 1993,[29] a time which would prove to be the longest standing cycling record on the Isle of Man, until it was beaten by Kennaugh.[29]