Upernavik (Kalaallisut: "Springtime Place"[2]) is a small town in the Qaasuitsup municipality in northwestern Greenland, located on a small island of the same name. With 1,181 inhabitants as of 2013,[1] it is the twelfth-largest town in Greenland. Owing to the small size of the settlement, everything is within walking distance. It contains the Upernavik Museum. It is the northern-most town in Greenland with a population of over 1,000. 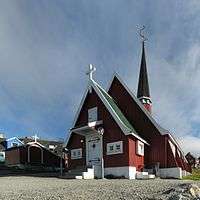 The new church in Upernavik

The town was founded as Upernavik in 1772.[3] From the former name of its island, it was sometimes known as Women's Island; its name was also sometimes Anglicized to "Uppernavik".[4] In 1824, the Kingittorsuaq Runestone was found outside the town. It bears runic characters left by Norsemen, probably from the late 13th century. The runic characters list the names of three Norsemen and mention the construction of a rock cairn nearby.

This is the furthest north that any Norse artifacts have been found, other than those small artifacts that could have been carried north by Inuit traders and marks the northern known limit of Viking exploration.

Upernavik is served by Air Greenland, with scheduled flights from Upernavik Airport to Qaanaaq, Qaarsut, and Ilulissat.[5] Most settlements in the archipelago are served during weekdays with the Bell 212 helicopter.[5]

In the summer, a small ferry of Royal Arctic Line sails to local villages.

Upernavik within the Upernavik Archipelago

With 1,181 inhabitants as of 2013, Upernavik is the fifth-largest town in the Qaasuitsup municipality.[1] The population has been relatively stable over the last two decades and has increased by more than 28% relative to the 1990 levels,[8] with migrants from the smaller settlements in the archipelago helping keep the population level stable. Cyclist Hanne Malmberg was born in Upernavik. She represented Denmark at the 1992 Summer Olympics.[9]