South Gyeongsang Province (Korean: 경상남도) is a province in the southeast of South Korea. The provincial capital is at Changwon. It is adjacent to the major metropolitan center and port of Busan. There is UNESCO World Heritage Site Haeinsa, a Buddhist temple that houses the Tripitaka Koreana and attracts many tourists. Automobile and petrochemical factories are largely concentrated along the southern part of the province, extending from Ulsan through Busan, Changwon, and Jinju.

Before 1895, the area corresponding to modern-day Gyeongsangnam-do was part of Gyeongsang Province, one of the Eight Provinces of Korea during the Joseon Dynasty. In 1895, southern Gyeongsang was replaced by the districts of Jinju in the west and Dongnae (modern-day Busan) in the east. In 1896, they were merged to form Gyeongsangnam-do.

The Nakdong delta plain around Gimhae is one of the best granaries in South Korea. Agricultural products form Gyeongsangnam-do include rice, beans, potatoes, and barley. The area is renowned for its cotton, sesame, and fruits which are grown along the southern seaside. A number of marine products are caught. The province is one of the country's leading fisheries.

The largest cities in the region are Busan and Ulsan, which are separately administered as provincial-level Metropolitan Cities. Apart from the capital Changwon, other large or notable cities include Gimhae and Jinju. 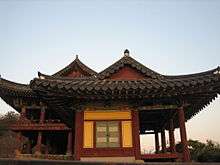 Yeongnamru in Miryang, province Gyeongsangnam-do. A pavilion from the Joseon Dynasty

Gyeongsangnam-do is the home of Haeinsa, a Buddhist temple that houses the Tripitaka Koreana and attracts many tourists. It is in the national park around Jirisan (1,915 m) on the border with Jeollabuk-do. The temple was first built in 802.

Gyeongsangnam-do is divided into 8 cities (si) and 10 counties (gun). The names below are given in English, hangul, and hanja.

According to the census of 2005, of the people of South Gyeongsang 40% follow Buddhism and 14.8% follow Christianity (8.8% Protestantism and 6% Catholicism).[3] 45.2% of the population is mostly not religious or follow Muism and other indigenous religions. 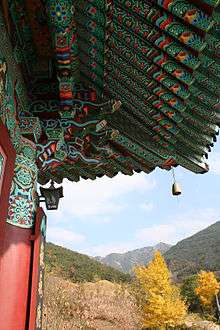 Changnyeong Temple at the base of Mount Hwawang