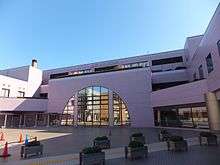 Hanamigawa Ward is located inland in the northernmost part of the city of Chiba. The ward takes its name from the Hanami River, which flows through the ward.