"Funabashi" redirects here. For the train station in this city, see Funabashi Station. 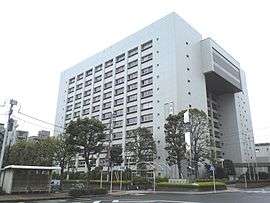 Funabashi (船橋市, Funabashi-shi) is a city located in northwestern Chiba Prefecture, Japan. As of February 2016, the city had an estimated population of 623,679 and a population density of 7,280 persons per km². The total area was 85.62 square kilometres (33.06 sq mi). It is the 7th most populous city in Greater Tokyo.

Funabashi is located in northwestern Chiba Prefecture and makes up one part of the Shimōsa Plateau. The city sits 20–30 meters above sea level, and is relatively flat. Funabashi is crossed by the Tone River, and the small Ebi River is located entirely within city limits. Funabashi formerly had wide, shallow beaches, but much of the coast has been industrialized and transformed by reclaimed land.

The name "Funabashi" is mentioned in the Kamakura period chronicle Azuma Kagami. However, the name itself is even more ancient, dating from before the Nara period and the Yamatotakeru mythology. Archaeologists have found stone tools from the Japanese Paleolithic period and shell middens from the Jomon period in the area, indicating continuous inhabitation for thousands of years. A number of Shinto shrines and Buddhist temples in the area claim to have been founded in the Nara period or Heian period. During the Muromachi periods, the area was controlled by the Chiba clan. During the Sengoku period, the Chiba clan fought the Satomi clan to the south, and the Late Hojo clan to the west. After the defeat of the Chiba clan, the area came within the control of Tokugawa Ieyasu.

Under the Tokugawa shogunate, the area prospered as a post town on the river crossing of the Tone River, and was largely retained as tenryō under the direct control of the Shogunate and administered through a number of hatamoto. The area was also a favored hunting grounds for the Shogun. During the Boshin War of the Meiji Restoration, Funabashi was the location of a minor skirmish between Tokugawa loyalists under Enomoto Takeaki and the pro-Imperial forces of Okayama Domain and Satsuma Domain, during which most of the town burned down.

After the abolition of the han system, the area eventually became part of Chiba Prefecture. Funabashi Town was one of several towns and villages created on April 1, 1889 under Inba District. The area developed rapidly due to its proximity to Tokyo and the presence of numerous military facilities in the area. On April 1, 1937, Funabashi was elevated to city status through merger with neighboring Katsushika Town and Yasakae, Hoden and Tsukada Villages. The new city was host to numerous military installations in World War II, and was bombed in the air raids on Japan in 1945.

Funabashi is a regional commercial center and, due to its numerous train connections, a bedroom community for nearby Chiba and Tokyo.