Chiba City is one of the Kantō region's primary seaports, and is home to Chiba Port, which handles one of the highest volumes of cargo in the nation. Much of the city is residential, although there are many factories and warehouses along the coast. There are several major urban centers in the city, including Makuhari, a prime waterfront business district in which Makuhari Messe is located, and Central Chiba, in which the prefectural government office and the city hall are located.

Chiba is famous for the Chiba Urban Monorail, the longest suspended monorail in the world. Some popular destinations in the city include: Kasori Shell Midden, the largest shellmound in the world at 134,000 m2 (160,000 sq yd), Inage Beach, the first artificial beach in the nation which forms part of the longest artificial beach in Japan, and the Chiba City Zoological Park, popular on account of the standing red panda Futa.

The name of Chiba in the Japanese language is formed from two kanji characters. The first, 千, means "thousand" and the second, 葉 means "leaves". The name first appears as an ancient kuni no miyatsuko, or regional command office, as the Chiba Kuni no Miyatsuko (千葉国造).[2] The name was adopted by a branch of the Taira clan, which moved to the area in present-day Chiba City in the late Heian period. The branch of the Taira adopted the name and became the Chiba clan, which held strong influence over the area of the prefecture until the Azuchi–Momoyama period. The name "Chiba" was chosen for Chiba Prefecture at the time its creation in 1873 by the Assembly of Prefectural Governors (地方官会議, Chihō Kankai Kaigi), an early Meiji-period body of prefectural governors that met to decide the structure of local and regional administration in Japan.[3]

The first records related to the city of Chiba record the emigration of Taira Tsuneshige (1083?–1088), a powerful bushi warlord of the late Heian period, to Shimōsa Province, which historically occupied the north of Chiba Prefecture. Tsuneshige was appointed as gunji administrator of Sōma District, but was transferred to the same position in Chiba District two years later. Here he proclaimed himself Chiba Tsuneshige (千葉常重), became a kokushi governor of the province, and used the area around present-day Chiba City as a power base to rule over Shimōsa Province, Kazusa Province, as well as establish himself as a military force in the Kantō region.[4] Tsuneshige's son, Chiba Tsunetane (千葉常胤) (1118–1201) was instrumental in aiding Minamoto Yoritomo (1147–1199) with the establishment of the Kamakura shogunate. Tsuneshige built a spacious residence and numerous temples in present-day Chiba City, and in the same period he transferred his power base from Ōji Castle to Inohana Castle on Mount Inohana.[5] The area of present-day Chiba City became jōkamachi (城下町), or castle town, and prospered under the Chiba clan.[6] The clan's power extended in the region until the Muromachi period.[7][8]

The Chiba clan's power and influence declined because of wars around the Kantō region during the Nanboku-cho and Muromachi periods. In the 16th century, instead of the Chiba clan, the Hara clan, which was one of the servants of Chiba clan, wielded power in this region. In the Sengoku period, the Hara clan was forcibly removed by Ashikaga Yoshiaki (足利義明, not to be confused with 足利義昭). Then, Ashikaga Yoshiaki was also removed by the Sakai (酒井 not to be confused with the Sakai clan in Mikawa) clan, which was one of the servants of the Satomi (里見) clan. Finally both the Chiba and Sakai clans were annihilated by Toyotomi Hideyoshi.

In the Edo period, the Oyumi (生実氏), Morikawa (森川氏) clan, and the Sakura (佐倉氏) clans governed the area now occupied by the city. A part of the area was also governed directly by the Tokugawa Bakufu. The Oyumi clan governed their territory stably. On the other hand, according to the Sakura clan, from the beginning of the Edo period, changed governors frequently, including Takeda Nobuyoshi, Matsudaira Tadateru, Ogasawara Yoshitsugu (小笠原吉次), and Doi Toshikatsu. Finally the Hotta clan stabilized the governance of their territory. Chiba prospered in this period as a shukuba (宿場) post-town of the Tokugawa shogunate.[6]

After the Meiji Restoration in 1868 and the advent of the railroad in Japan Chiba became the political, economic, and cultural capital of the Chiba Prefecture. Chiba City founded on January 1, 1921.[6] Numerous small villages and towns were merged into the previous town of Chiba (千葉町), a process that continued until 1944. Large-scale land reclamation added to the area of the city throughout the 20th century. The city was a major center of military production leading up to World War II, and as such, was a target of aerial bombing by the United States. The city was almost completely destroyed by the end of the war. Post-war industrialization led to the city becoming a major part of the Keiyō Industrial Zone.[6] Chiba became a Designated City of Japan on April 1, 1992.[1]

Chiba has a humid subtropical climate (Köppen climate classification Cfa) with very hot summers and cool to mild winters. Precipitation is significant throughout the year, but is somewhat lower in winter. 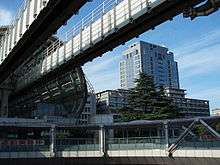 Chiba was governed by Keiichi Tsuruoka, an independent (elected with support of LDP and Kōmeitō), until May 1, 2009. He was arrested in April 2009 during a corruption investigation by the Tokyo Metropolitan Police. He was succeeded by Toshihito Kumagai of the DPJ, who won election in June 2009.[9]

The city assembly has 54 elected members.

Chiba Prefecture is famous for peanuts, or rakkasei. One of the many points of interest is the Experimental Station for Landscape Plants. 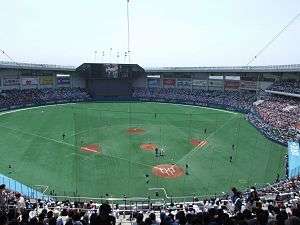 Home Stadium of the Chiba Marines

Chiba plays host to the annual International Chiba Ekiden and the Chiba International Cross Country takes place just outside the city. Chiba Velodrome is located within the city. It also hosts the Bridgestone Open golf tournament.

Chiba is home to several professional sports teams, most notably: 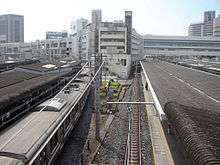 Chiba is twinned with: