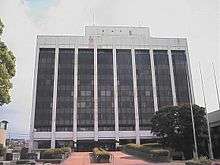 Kimitsu is the second largest city in Chiba Prefecture and is located in the western part of central Bōsō Peninsula. It borders Tokyo Bay. Two small rivers cross Kimitsu, the Koito River and the Obitsu River.

The area of present-day Kimitsu was largely part of the feudal domain of Kururi during the Edo period. It was divided between Moda District and Sue District in the early Meiji period cadastral reforms. Both districts became part of Kimitsu District from April 1, 1897. Kimitsu Town was founded within Kimitsu District on April 1, 1943, and expanded through annexation of two neighboring villages on April 1, 1944. Kimitsu was elevated to city status on September 1, 1971.

Despite its short coastline on Tokyo Bay, the economy of Kimitsu is centered around its coastal belt of heavy industries, primarily by the large-scale steelworks of Nippon Steel Kimitsu Works. Kimitsu Works was established in 1965, covers 11,720,000 square metres (126,200,000 sq ft), and employed 3,280 people as of 2007.[1] The Koito Fishing Port, technically located in both Kimitsu and Futtsu, is located just north of Cape Futtsu at the mouth of the Koito River. Entry in and out of the fishing port suffers from sediment deposited by the Koito.[2] Kazusa Akademia Park, which spans both Kimitsu and Kisarazu, was established to carry out research in biotechnology and information technology.[3]

Kimitsu is twinned with the following cities.