Makuhari Station is served by the Sōbu Main Line (Chūō-Sōbu Line local service). Tracks for non-stop Sōbu Line (Rapid) services are situated on the north side of the platforms. 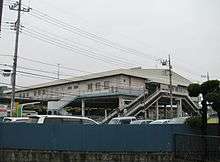 The north side in December 2007, before the addition of a passenger lift

The station opened on 9 December 1894. With the privatization of Japanese National Railways (JNR) on 1 April 1987, the station came under the control of JR East.

This article is issued from Wikipedia - version of the 12/26/2015. The text is available under the Creative Commons Attribution/Share Alike but additional terms may apply for the media files.