For other uses, see Harbor (disambiguation). 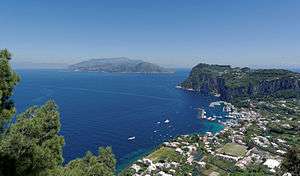 A harbor or harbour (see spelling differences), or haven, is a body of water where ships, boats and barges seek shelter from stormy weather, or are stored for future use. Harbors and ports are often confused with each other. A port is a manmade facility built for loading and unloading vessels and dropping off and picking up passengers. Ports are often located in harbors.

Harbors can be natural or artificial. An artificial harbor can have deliberately constructed breakwaters, sea walls, or jettys, or they can be constructed by dredging, which requires maintenance by further periodic dredging. An example of an artificial harbor is Long Beach Harbor, California, United States which was an array of salt marshes and tidal flats too shallow for modern merchant ships before it was first dredged in the early 20th century.[1]

In contrast, a natural harbor is surrounded on several sides by prominences of land. Examples of natural harbors include Sydney Harbour, Australia and Trincomalee Harbour in Sri Lanka. 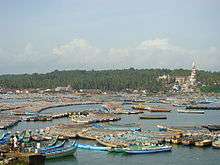 A natural harbor in Vizhinjam, India 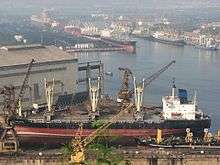 A natural harbor is a landform where a part of a body of water is protected and deep enough to furnish anchorage. Many such harbors are rias. Natural harbors have long been of great strategic naval and economic importance, and many great cities of the world are located on them. Having a protected harbor reduces or eliminates the need for breakwaters as it will result in calmer waves inside the harbor. Some examples are:

For harbors near the North and South Poles, being ice-free is an important advantage, especially when it is year-round. Examples of these include:

The tiny harbor at the village of Clovelly, Devon, England 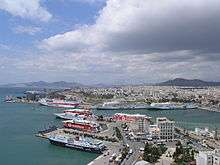 The harbor of Piraeus in Greece. 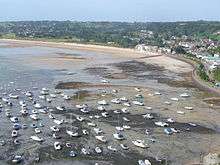 The harbor of Gorey, Jersey falls dry at low tide.

The harbor in Aberystwyth, painted c. 1850

The following are large natural harbors: 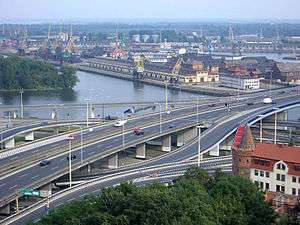 Other notable harbors include: