The Port of Chittagong (Bengali: চট্টগ্রাম বন্দর) is the largest seaport in Bangladesh, located by the estuary of the Karnaphuli River in Patenga, near the city of Chittagong. Historically, it is the most important port of Bangladesh and has been playing an essential part in the economic development of the country.[2][3] It is a deep water seaport dominated by trade in containerised manufactured products (especially garments, jute and jute goods, leather products, fertilizers and seafood), raw materials and to a lesser extent passengers.

Window berthing system was introduced at the seaport on 6 August 2007, enabling the sea port to provide the arrival and departure times of all ships. Two berths at the port terminal are kept in reserve for emergency. In 2011, the port handled 43 million tonnes of cargo and 1.4 million tonnes of containers.[4] The port handled 1.5 million TEUs (twenty equivalent units) containers in 2010-11, up from 1.2 million TEUs in the previous year, according to the CPA Traffic Department. Port of Chittagong is ranked as world's 90th busiest port in the world in 2013.[5] 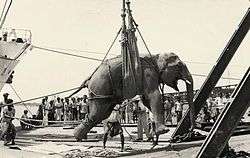 Chittagong port has been mentioned in the works of Ptolemy, Fa-hien, Hieu-en tsng, and Ibn Battuta.[7] This was an important port used by the traders from the Middle East, China, Turkey, Europe to trade with this part of the world.

Arab traders who arrived in the 8th century played a pivotal role in the spread of Islam in Bengal.[8] During the 9th century the activities of the port increased tremendously as the Arab traders started using the port. They used to call the port "Samunda". The port was under their control at the time. In the 15th century the port served as an important place for the re-export of goods produced in China.[9]

The 16th century saw the arrival of the Portuguese. The Arakan Kingdom provided permission to the Portuguese and used them as a buffer against Mughal Empire.[10] The Portuguese engaged in Piracy, Slavery and forced conversion in the region.[11] João da Silveira was the first Portuguese Captain to reach the port.[12] He arrived with his ship Lopo Soana in 1517. The Portuguese named the port "PORTO GRANDE" (a great Port ). The records show that the Porto Grande offered easy access and safe anchorage to ships of 20 feet draught. In 1552 De Barros described Chittagong as the "most famous and wealthy city in Bengal" due to the port of Chittagong which was responsible for all trade in the region.[13] Chittagong port was an vital port to the Arakan Kingdom.The Arakanese lost it to the Mughal empire in 1660s. The loss of the port reduced the fortunes of the Kingdom.[14]

It remained a port during Moghul time. Later in early 19th century the British took control of the Chittagong port.The port of Chittagong became a natural outlet for the Northeastern regions of the then British-India that led to the enactment of Port Commissioner’s Act of 1887. At that time the facilities of the port consisted of five wooden and one pontoon jetties. In the year 1889-90 the port handled exports totalling 1.25 lac tons.[15] There was an increase in trade between the port of Chittagong and Naraingunge.[16]

Port of Chittagong taken from beside the Karnaphuli River.

The British upgraded the port and increased efficiency.[17] During World War 2 the port faced aerial bombardment from the Japanese.[18] During Bangladesh Liberation war in 1971 the Pakistan Navy mined the approaches to the port. After the end of Bangladesh Liberation War, Rear Admiral of Indian navy S. H. Sarma was made Chairman of Chittagong Port Trust. He took over the position from the acting Chairman Kibria. He worked to get the port to working order. The Port had been damaged by bombing of the Indian Air Force. He also ensured that all outbound vessels were checked to eliminate the possibility of Pakistani military personnel escaping by sea. The Shipping Corporation of India used this port to transport 13 thousand Pakistani POWs to India. Admiral Zuenkhov and personnel of the Soviet Navy carried out mine sweeping operations in the port area.[19]

The year 2000 had the highest number of Piracy attacks in the recorded history of Chittagong. Many of the raids resulted in the theft of mooring lines and Zinc anode and other movable ship equipments. Chittagong Port has experienced piracy in recent times.[20] In 2005 it had the highest pirate attacks in a port area in the world. The Government of Bangladesh has increased Navy and Coast Guard presence in the area.[21] 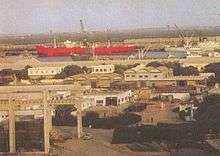