Haskovo (Bulgarian: Хасково) is a city and the administrative centre of the Haskovo Province in southern Bulgaria, not far from the borders with Greece and Turkey. According to Operative Program Regional Development of Bulgaria, the urban area of Haskovo is the seventh largest in Bulgaria and has a population of 184,731 inhabitants.

The first settlement found in Haskovo is from circa 5000 BC. Haskovo celebrated its 1,000th anniversary as a town in 1985. To mark the event, a new clock tower was erected in the centre of the town.

Haskovo Cove in Greenwich Island in the South Shetland Islands, Antarctica is named after the city of Haskovo.

Due to its relative proximity to the Aegean sea the climate in summer is very similar to Mediterranean climate, whilst in winter, especially with the winds coming from the north, the temperatures drop to the level of continental climate. The average yearly temperature is about 14 °C (57 °F). Winters are cold but not as snowy as the western and northern parts of the country. Summer in Haskovo begins around mid-May and lasts until October.

Many speculate that the current name came from the Arabic word "has" (هس; possession). Others claim that it comes from the Turkish word "has", having roots to the meaning "clean." The ancient Thracian name of the settlement was Marsa, by which it was known until as late as 1782. By 1830, it was known by its Turkish name, Hasköy.[2] The Bulgarian (and common Slavic) placename suffix "-ovo" replaced the Turkish "köy" after the city switched to Bulgarian from Ottoman rule.

According to the archeologists, the area of Haskovo was originally settled about seven thousand years ago. In and around Haskovo, evidence has been preserved that confirms its long history during the prehistoric, Thracian, Greek, Roman, and Byzantine periods. In the 9th century — during the First Bulgarian Empire — a fortress was built in Haskovo that soon was transformed into a town. The town was located at the centre of a sizable region between the Klokotnitsa, Harmanliyska, and Maritsa rivers. In medieval times it was known for the nearby Uzundzhovo fair, famous in all of Bulgaria.

After the liberation from Ottoman rule in 1878, the Haskovo region became popular for high-quality tobacco production. However, presently there is no cigarette production in the region as the once big Tobacco company "Haskovo-BT" was closed in 2005.[3] Currently, the biggest enterprises produce food, machinery, and textiles.

The population of Haskovo was 14,191 in 1887.[4] Since then it started growing decade by decade, mostly because of the migrants from the rural areas and the surrounding smaller towns. It reached its peak in the period 1987-1991, when the population exceeded 90,000.[5]

In January 2012, Haskovo's population was 75,641 people within the city limits. The Haskovo Municipality, with the legally affiliated adjacent villages, had a population of 93,305.[1]

According to the latest 2011 census data, the individuals declared their ethnic identity were distributed as follows:[9][10]

According to the 2001 census, the Orthodox Christians are around 80% vs. around 20% Muslims. 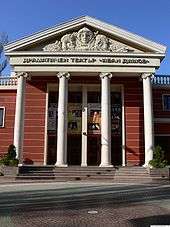 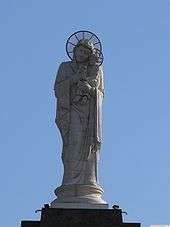 The most notable cultural landmarks in Haskovo are the newly renovated Ivan Dimov drama theater, the Museum of History, and an art gallery. The annual Colourful Thrace Sings and Dances folk festival takes place in the nearby park Kenana.

A 32-metre-high monument of the Mother of God and the Infant Jesus was erected on the Hill of Youth near Haskovo in 2003. The monument was inaugurated on the 8th of September on the occasion of the Nativity of Holy Virgin Mary, when the day of the town of Haskovo is celebrated. It was entered into the Guinness Book of Records as the highest monument to the Mother of God in the world.

Haskovo has recently invested in renovating its town center, with a variety of new sculptures and fountains erected.

Municipal landmarks include the Thracian Aleksandrovo tomb as well as Uzundzhovo's Church of the Assumption, built originally as a mosque during Ottoman times. In 1395 the Eski cami (the Old Mosque) was built as one of the first in the Balkans. It is interesting that its minaret is slightly inclined.

Haskovo is twinned with: