Henry Cantwell "Harry" Wallace (May 11, 1866 – October 25, 1924) was an American farmer, journalist, and political activist who served as the Secretary of Agriculture from 1921 to 1924. He was the father of Henry A. Wallace, who would follow in his footsteps as Secretary of Agriculture under President Franklin D. Roosevelt. He was editor of Wallaces' Farmer from 1916 to 1921.

Born May 11, 1866 in Rock Island, Illinois, Wallace was the first child and son of Henry Wallace, Sr. and Nancy "Nannie" (née Cantwell) Wallace. John Wallace, the father of Wallace, Sr., immigrated from Ireland and owned a farm in western Pennsylvania, which Wallace, Sr. worked on as a child with his seven siblings. He moved west at 18 and became a Presbyterian minister. Wallace Sr. married, Nancy Cantwell, the daughter of an Ohio politician, in 1863.[1]

Wallace, Sr. moved the family to Winterset, Iowa in 1877 on a doctor's recommendation. The family managed farm lands in Adair County, and Wallace, Sr.'s health improved significantly. He then became involved with the local newspaper business and bought the Winterset Chronicle and the Madisonian, and wrote for both from a Republican perspective. HeHe worked as his father's apprentice in the journalism business.[2] In 1883, Wallace, Sr. was named an editor for the Iowa Homestead, the largest farming publication in Iowa, and moved to Des Moines to be closer to his work.[1]

HeHe left Winterset in 1885 to attend Iowa State Agricultural College, now Iowa State University; he left the college in 1887 and later said "very little agriculture was taught [at the school]".[1][3] He married Carrie May (Brodhead) Wallace, whom he met at the college, on November 27, 1887.[2] The two returned to Adair County to become tenant farmers on his father's land. The couple had two children while they lived on the farm: Henry Agard was born on October 7, 1888, and Annabelle Wallace was born on November 8, 1891. They eventually had six children together.[4]

Harry handled much of the daily details at Wallaces' Farmer and became editor when his father died. He also helped establish 4-H clubs and extension programs in Iowa, and helped start the Iowa Farm Bureau. 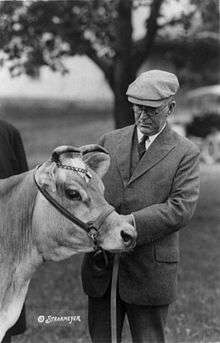 Wallace served as the longtime president of the Cornbelt Meat Producers Association. Appointed Secretary of Agriculture by President Warren G. Harding. In 1921, Wallace promoted programs for American farmers struggling against over-production and the collapse of farm prices following the First World War.

Wallace continued to served as Secretary of Agriculture after Vice-President Calvin Coolidge succeeded to the Presidency on the death of President Warren G. Harding in August 1923.

Wallace died while still in office on October 25, 1924, just 10 days before the next election in 1924. He was 58 years old at the time of his death. Wallace was buried in Woodland Cemetery in Des Moines, Iowa.[5]

Wallace's book, Our Debt and Duty to the Farmer, was published posthumously.