History of slavery in Louisiana

The history of slavery in the territory currently known as Louisiana did not begin after its settlement by Europeans, as Native Americans also reduced captured enemies to the status of slaves. Following Robert Cavelier de La Salle establishing the French claim to the territory, and the introduction of the name Louisiana, the first settlements in the southernmost portion of Louisiana (New France) were developed at present-day Biloxi, Mississippi (1699), Mobile, Alabama (1702), Natchitoches, Louisiana (1714), and New Orleans (1718), after which point slavery was established by Europeans. The institution was maintained by the Spanish (1763–1800) when the area was part of New Spain, by the French when they reacquired the colony (1800-1803), and by the United States, following the Louisiana Purchase of 1803. Due to its complex history, Louisiana has a very different pattern of slavery compared to the rest of the United States.[1]

Chattel slavery was introduced by French colonists in Louisiana in 1706, when they made raids on the Chitimacha settlements. Thousands of indigenous people were killed, and the surviving women and children were taken as slaves. The enslavement of natives, including the Atakapa, Bayogoula, Natchez, Choctaw, Chickasaw, Taensa, and Alabamon peoples, would continue throughout the history of French rule. While Native American peoples had sometimes made slaves of enemies captured in war, they also tended to adopt them into their tribes and incorporate them among their people.

The French introduced African chattel slaves to the territory in 1710, after capturing a number as plunder during the War of the Spanish Succession. Trying to develop the new territory, the French transported more than 2,000 Africans to New Orleans between 1717–1721, on at least eight ships. The death toll for African and native slaves was high, with scurvy and dysentery widespread because of poor nutrition and sanitation. Although sailors also suffered from scurvy, enslaved Africans were subject to more shipboard diseases owing to overcrowding.

When Alejandro O'Reilly re-established Spanish rule in 1768, he issued a decree on December 7, 1769, which banned the trade of Native American slaves.[2] Although there was no movement toward abolition of the African slave trade, Spanish rule introduced a new law called coartación, which allowed slaves to buy their freedom, and that of others.[3]

A group of maroons led by Jean Saint Malo resisted re-enslavement from their base in the swamps east of New Orleans between 1780 and 1784.

On May 4, 1795, 57 slaves and three local white men were put on trial in Point Coupee. At the end of the trial 23 slaves were hanged, 31 slaves received a sentence of flogging and hard labor, and the three white men were deported, with two being sentenced to six years forced labor in Havana.[4]

The demand for slaves increased in Louisiana and other parts of the Deep South after the invention of the cotton gin (1793) and the Louisiana Purchase (1803). The cotton gin allowed the processing of short-staple cotton, which thrived in the upland areas. It made possible a new commodity crop in northern Louisiana, although sugar cane continued to be predominant in southern Louisiana. The northern area of the state became another outpost for the "Cotton Empire", which also encompassed neighboring states such as Arkansas, Mississippi, Alabama, Georgia, and Texas. A brisk domestic slave trade developed; many thousands of black slaves were sold by slaveholders in the Upper South to buyers in the Deep South, in what amounted to a significant forced migration.

The Mississippi River Delta area in southeast Louisiana created the ideal alluvial soil necessary for the growing of sugar cane. Sugar was the prime export of Louisiana during the antebellum period.

Early in 1811, while Louisiana was yet the U.S. Territory of Orleans, the largest slave revolt in American history began about thirty miles outside of New Orleans (or a greater distance if traveled along the twisting Mississippi River), as slaves rebelled against the brutal work regimens of sugar plantations. There had been an influx of Haitian slaves, free people of color, and refugee French planters following the Haitian Revolution (1791-1804), which was likely a contributing factor in the revolt. The 1811 German Coast Uprising ended with white militias and soldiers hunting down black slaves, peremptory tribunals or trials in three parishes (St. Charles, St. John the Baptist, and Orleans), execution of the rebels, and the public display of their severed heads. In Orleans Parish, the heads were placed in the Place d'Armes, today's Jackson Square.

Slavery was officially abolished by the Louisiana state Constitution of 1864. Slavery had been theoretically abolished by President Abraham Lincoln's Emancipation Proclamation during the American Civil War; which proclaimed, in 1863, that slaves located in territories which were in rebellion from the United States were free. In some areas, slaves left the plantations to seek Union military lines for freedom. If such lines were located too far away, they were often held in servitude until the Union gained control of the South. 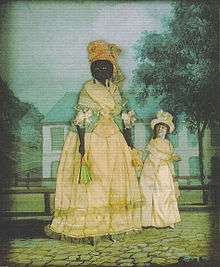 18th-century colonial Louisiana had a completely different slave-trade pattern than that of the Thirteen Colonies. First, the slaves originated from French, and later Spanish, colonies (principally from Senegal, the Bight of Benin and the Congo region),[5] rather than from British colonies. After the Louisiana Purchase, an influx of slaves and free blacks from the United States occurred.[6]

Secondly, Louisiana's slave trade was governed by the French Code Noir, and later by its Spanish equivalent the Código Negro,[7] As written, the Code Noir gave unparalleled rights to slaves, including the right to marry. Although it authorized and codified cruel corporal punishment against slaves under certain conditions, it forbade slave owners to torture them or to separate married couples (or to separate young children from their mothers). It also required the owners to instruct slaves in the Catholic faith, implying that Africans were human beings endowed with a soul, an idea that had not been acknowledged until then.[8][9][10]

Together with a more permeable historic French system related to the status of gens de couleur libres (free people of color), often born to white fathers and their mixed-race concubines, a far higher percentage of African Americans in the state of Louisiana were free as of the 1830 census (13.2% in Louisiana compared to 0.8% in Mississippi, whose population was dominated by white Anglo-Americans. [11]) The free people of color were on average exceptionally literate, with a significant number of them owning businesses, properties, and even slaves.[12][13]

The Code Noir also forbade interracial marriages, but interracial relationships were formed in New Orleans society. The mulattoes became an intermediate social caste between the whites and the blacks, while in the English colonies the mulattoes and blacks were considered equal and discriminated against equally.[14][15]

When control of Louisiana shifted to the United States, the Catholic social norms were deeply rooted in Louisiana; the contrast with predominantly Protestant parts of the young nation, where English norms prevailed, was evident. The Americanization of Louisiana resulted in the mulattoes being considered as black, and free blacks were regarded as undesirable.[16][17]