This article is about the city. For the emperor, see Emperor Shenzong of Song.

Xining (Chinese: 西宁 Xīníng [ɕí.nǐŋ]; Standard Tibetan: ཟི་ལིང་། Ziling; Mongolian: ᠰᠢᠨᠢᠩ Seleng) is the capital of Qinghai province in western China,[1] and the largest city on the Tibetan Plateau. It has 2,208,708 inhabitants at the 2010 census whom 1,198,304 live in the built up area made of 4 urban districts.[2]

The city was a commercial hub along the Northern Silk Road's Hexi Corridor for over 2000 years, and was a stronghold of the Han, Sui, Tang, and Song dynasties' resistance against nomadic attacks from the west. Although long a part of Gansu province, Xining was added to Qinghai in 1928. Xining holds sites of religious significance to Muslims and Buddhists, including the Dongguan Mosque and Ta'er Monastery. The city lies in the Huangshui River valley, and owing to its high altitude, has a cold semi-arid climate. It is connected by rail to Lhasa, Tibet and connected by high-speed rail to Lanzhou, Gansu and Urumqi, Xinjiang.

Xining has a history of over 2,100 years[3] and was a chief commercial hub on the Hexi Corridor caravan route to Tibet, handling especially timber, wool and salt in ancient times. The trade along the Hexi Corridor was part of a larger trade corridor along the Northern Silk Road, whose use was intensified in the 1st century BC after efforts by the Han dynasty to control this route.[4]

Under the Han dynasty (206 BC – 220 AD) a county called Linqiang was established to control the local Qiang tribesmen. It was again a frontier county under the Sui (581–618) and Tang (618–907) dynasties; during the 7th and early 8th centuries it was a center of constant warfare with Tuyuhun and Tibet. In 763, it was overrun by the Tibetans and while under Tibetan control was known to the Chinese as Qingtangcheng. Recovered by the Song dynasty in 1104, it received the name Xining (meaning "peace in the west") and has been the seat of a prefecture or superior prefecture under that name since that time. In the late 16th century, the Ta'er Monastery was founded some 19 km (12 mi) to the southeast, establishing Xining as an important religious center for the Yellow Hat sect of Buddhists.

A major earthquake occurred May 22, 1927, measuring at a magnitude of 7.6. It was one of the deadliest earthquakes in China with a total count of over 40,000 deaths. It also caused large land fractures.

Xining was subjected to aerial bombardment by Japanese warplanes in 1941 during the Second-Sino Japanese War. The bombing spurred all ethnicities in Qinghai, including the local Qinghai Mongols and Qinghai Tibetans, against the Japanese.[7][8] The Salar Muslim General Han Youwen directed the defense of the city of Xining during air raids by Japanese planes. Han survived an aerial bombardment by Japanese planes in Xining while he was being directed via telephone from Ma Bufang, who hid in an air raid shelter in a military barracks. The bombing resulted in human flesh splattering a Blue Sky with a White Sun flag and Han being buried in rubble. Han Youwen was dragged out of the rubble while bleeding and he managed to grab a machine gun while he was limping and fired back at the Japanese warplanes and cursed the Japanese as dogs in his native Salar language.[9][10][11][12]

Ma Bukang and Ma Bufang were having a discussion on Ma Biao when Japanese warplanes bombed Xining.[13]

Xining was given municipal status in 1945.

Under the rule of Governor Ma Bufang, Xining, like the rest of Qinghai, underwent industrialization and modernization. In 1947 the USA sold Ma Bufang a piped water (sewage) system which was installed in Xining.[14] Ma Bufang also promoted education. He made businessmen methodically clean up Xining by serving as insect exterminators, killing flies and neatly throwing them away.[15]

Since the late 1950s, when the Liujia Gorge Dam and hydroelectric project came into operation in neighboring Gansu province, Xining has been linked by a high-tension electrical grid to both Liujia and Lanzhou. It also uses local coal from mines at Datongxian to the north. A modern woollen mill was installed at Xining before 1957. The city also has a leather industry and is a market for salt from the Qaidam region. During the late 1950s medium-sized iron and steelworks were built there, supplying metal to Lanzhou.

Construction of a highway to the mineral-rich Qaidam basin, and completion in 1959 a link to the Chinese rail network via Lanzhou in Gansu province, has spurred industrial development. This effort was part of a plan of the central government to rapidly exploit oil and pasturage in the Xining area beginning in the 1950s.[16]

Xining is located in the eastern part of Qinghai Province and lies on the Huangshui River. It has a total area of 350 km2 (140 sq mi).

Xining is located on the eastern edge of the Qinghai–Tibet Plateau and the upper reaches of the Huangshui River. It is the political, economic, and cultural center of Qinghai Province with an average altitude of about 2,200 metres (7,200 ft). Human activity in the region can be traced to 2,100 years ago. During the Western and Eastern Han dynasties, owing to its developing agriculture, Xining was paid noticed due to its economic and military significance. As well as being an important hinge between the Central Plains and the western part of China in ancient times, Xining was an important link in the Silk Road. It continues to be an important rail and road link to the hinterlands of the Qinghai–Tibet Plateau.

Xining has also been dubbed the Summer Resort Capital of China owing to its cool summer, with a cold semi-arid climate (Köppen BSk). Conditions are influenced by the aridity and high altitude. Nights are cold or cool throughout the year, and the diurnal temperature variation often reaches or exceeds 15 °C (27 °F). The monthly 24-hour average temperatures ranges from −7.4 °C (18.7 °F) in January to 17.3 °C (63.1 °F) in July; the annual mean is 6.10 °C (43.0 °F), still making it one of the warmest locations in Qinghai due to the low elevation by provincial standards. Rainfall falls mainly from May to September, and the area is often dry and sunny; With monthly percent possible sunshine ranging from 53 percent in September to 69 percent in November and January, the city receives 2,676 hours of bright sunshine per year. Extreme temperatures have ranged from −26.6 °C (−16 °F) to 36.5 °C (98 °F).[17]

In 2007, the World Bank lent US$1 billion to aid river treatment in Xining, including Sanxian County's anti-flooding project, with an added US$1 billion to support infrastructure. Qinghai has invested large amounts in the treatment of Huangshui Main River and Nanchuan River, totalling 24.5 km (15.2 mi). However, a treatment on a 40 km (25 mi) river course and 10 flash flood relief channels remain pending due to lack of equipment. In Sanxian County, a 108.4 m (356 ft) long river course and 80 flash flood relief channels need treatment.

According to a 2011 World Health Organization (based on Chinese statistics), Xining has the second worst air quality (annual mean PM10 ug/m3 of 141) among eleven western China cities, and is worse than Beijing (121).[19]

Xining Economic & Technological Development Zone XETDZ) was approved as state-level development zone in July 2000. It has a planned area of 4.4 km2 (1.7 sq mi). XETDZ lies in the east of Xining, 5 km (3.1 mi) away from downtown. The XETDZ is the first of its kind at the national level on the Qinghai-Tibet Plateau. It is established to fulfill the nation's strategy of developing the west.

XETDZ enjoys a convenient transportation system, connected by the Xining–Lanzhou expressway and run through by two main roads, the broadest roads of the city. It is 4 km (2.5 mi) away from the railway station, 15 km (9.3 mi) from Xining Airport. 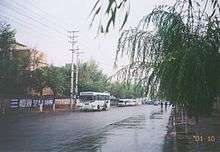 At present, four districts, three counties, and a national economic and technological development zone are under the administration of the local government. With a population of more than two million, Xining is the first city on the upper reaches of the Yellow River to achieve a population in the millions. There are about 37 nationalities living here, though it is only the Han, Hui, Monguor (Tu people in Chinese: 土族) and Tibetan who are numerically significant. Local traditions and customs are influenced by the Tibetans, Monguor, Muslims, and Han. On 2010 Census numbers, Han Chinese represent 74.04 percent of the total population of Xining, while Hui (16.26 percent), Tibetan (5.51 percent) and Tu (2.6 percent) are the main minority groups in the city.

The municipality oversees seven districts and counties. The data here are presented in km² and in population according to 2010 Census:

Jianguo Avenue in Xining, prior to 2013 reconstruction of the railway station

Xining is situated in a fertile mountain basin in the valley of the Huangshui (river), a tributary of the Yellow River, that acts as a river port. The city lies about 200 km (120 mi) west of Lanzhou, the capital of Gansu province, on what was traditionally the main trade route from northern China into Tibet and the Qaidam Basin. These routes are now followed by modern highways.

Inside the Xining railway station

Since 1959 Xining has been connected by the Lanzhou–Qinghai Railway to China's railway network. Later, this railway was extended into the Qaidam area via Haiyan near Qinghai Lake to Golmud, and, since 2006, to Lhasa, Tibet. (See the Qinghai–Tibet Railway).

The second major railway serving Xining is the Lanzhou–Xinjiang High-Speed Railway, opened in December 2014. When first opened, it just provided high-speed train service to Lanzhou and Urumqi (and points in between). Eventually, it will be connected to the rest of the nation's high-speed rail network.

Unlike many other Chinese cities, where the conventional and high-speed trains stop at different train stations, Xining railway station is served by both types of trains. Thus it can be used as a transfer point for e.g. a passenger traveling from Xinjiang to Tibet.

Located in the southwest part of Xining City, the Kumbum Monastery or Ta'er Monastery is one of six famous monasteries in the Gelug (also called Yellow Hat Sect) of Tibetan Buddhism and has hundreds of monks. Having a history of over 600 years, the Dongguan Mosque, located in the Xining City Zone, is one of the most famous mosques in the northwest region of China. It has splendid and diversiform towers, walls and halls in the mosque. Another unique religious structure is the Beishan Si (North Mountain Temple), a Taoist facility.

There are more than 300 Christian meeting points in Xining.[22] 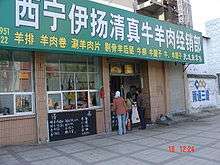 As the capital of Qinghai province, Xining almost boasts all varieties of local flavors. Xining's cuisine is distinct from other varieties of Chinese cities using mainly food products native to the area. Food here is substantial, but quite inexpensive.

In Xining, some restaurants serve varieties of 'plateau flavor', such as Feng'er Liji (a round lamb tenderloin), Danbai Chongcao Ji (a medicine cuisine made of chicken, Chinese caterpillar fungus and eggs), Jinyu Facai (pork wrapped in flagelliform nostoc and shaped as a goldfish) among others. These dishes are often cooked by the locals at home.

There are also many small restaurants offering noodles. Gan Ban is a very common noodle dish. Perhaps Mian Pian, which means "noodle leaves" is the most common noodle plate among the Qinghai people. On the streets, many Muslims sell spicy lamb brochettes. Due to the cold climate, residents of Xining are also fond of strong spirits—Xining has the reputation of being one of the heaviest regions of alcohol consumption in China.