This article is about Homo sapiens as a taxonomic classification. For a more general perspective on the human species, see Human. For other uses, see Homo sapiens (disambiguation).

Homo sapiens (Latin: "wise man") is the binomial nomenclature (also known as the scientific name) for the only extant human species. Homo is the human genus, which also includes Neanderthals and many other extinct species of hominid; H. sapiens is the only surviving species of the genus Homo. Modern humans are the subspecies Homo sapiens sapiens, which differentiates them from what has been argued to be their direct ancestor, Homo sapiens idaltu. The ingenuity and adaptability of Homo sapiens has led to its becoming the most influential species on the Earth; it is currently deemed of least concern on the Red List of endangered species by the International Union for Conservation of Nature.[1]

Further information: Homo and Names for the human species 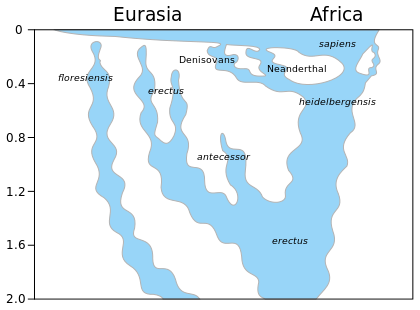 Schematic representation of the emergence of H. sapiens from earlier species of Homo. The horizontal axis represents geographic location; the vertical axis represents time in millions of years ago. Blue areas denote the presence of a certain species at a given time and place. Early modern humans spread from Africa across different regions of the globe and interbred with other descendants of Homo heidelbergensis, namely Neanderthals, Denisovans, and unknown archaic African hominins (top right).[5]

Traditionally, there are two competing views in paleoanthropology about the origin of H. sapiens: the recent African origin and the multiregional origin.

Since 2010, genetic research has led to the emergence of an intermediate position, characterised by mostly recent African origin plus limited admixture with archaic humans.

The recent African origin of modern humans is the mainstream model that describes the origin and early dispersal of anatomically modern humans. The theory is called the (Recent) Out-of-Africa model in the popular press, and academically the recent single-origin hypothesis (RSOH), Replacement Hypothesis, and Recent African Origin (RAO) model. The hypothesis that humans have a single origin (monogenesis) was published in Charles Darwin's Descent of Man (1871). The concept was speculative until the 1980s, when it was corroborated by a study of present-day mitochondrial DNA, combined with evidence based on physical anthropology of archaic specimens. According to genetic and fossil evidence, archaic Homo sapiens evolved to anatomically modern humans solely in Africa, between 200,000 and 100,000 years ago, with members of one branch leaving Africa by 60,000 years ago and over time replacing earlier human populations such as Neanderthals and Homo erectus.

The recent single origin of modern humans in East Africa is the near-consensus position held within the scientific community.[6][7][8][9][10] However, recent sequencing of the full Neanderthal genome suggests Neanderthals and some modern humans share some ancient genetic lineages. The authors of the study suggest that their findings are consistent with Neanderthal admixture of up to 4% in some populations. But the study also suggests that there may be other reasons why humans and Neanderthals share ancient genetic lineages.[11] In August 2012, a study by scientists at the University of Cambridge questioned this conclusion, hypothesising instead that the DNA overlap is a remnant of a common ancestor of both Neanderthals and modern humans. That study however does not explain why only a fraction of modern humans have Neanderthal DNA.[12][13]

The multiregional origin model provides an explanation for the pattern of human evolution proposed by Milford H. Wolpoff[14] in 1988.[15] Multiregional origin holds that the evolution of humanity from the beginning of the Pleistocene 2.5 million years BP to the present day has been within a single, continuous human species, evolving worldwide to modern Homo sapiens sapiens.

Scientific study of human evolution is concerned, primarily, with the development of the genus Homo (extant and extinct human species), but usually involves studying other hominids as well, i.e. other "great apes"; these include Australopithecus, an important ancestor of humans, and our current as well as extinct relatives among the Homininae subfamily: chimpanzees, bonobos, gorillas, and the related extinct hominins.

Similarly, the discovered specimens of the Homo rhodesiensis species have been classified by some as a subspecies, but this classification is not widely accepted.

Anatomically modern humans first appear in the fossil record in Africa about 195,000 years ago (see Omo remains), and studies of molecular biology give evidence that the approximate time of divergence from the common ancestor of all modern human populations was 200,000 years ago.[18][19][20][21][22] The broad study of African genetic diversity found the ǂKhomani San people to express the greatest genetic diversity among the 113 distinct populations sampled, making them one of 14 "ancestral population clusters". The research also located the origin of modern human migration in southwestern Africa, near the coastal border of Namibia and Angola.[23][24]

The forces of natural selection have continued to operate on human populations, with evidence that certain regions of the genome display directional selection in the past 15,000 years.[25]