There also are selected financial service activities in other states, including offices in Florida, Cayman Islands, and Hong Kong.[1] Huntington also maintained retail banking offices in Florida until 2002, when it sold them to SunTrust Banks to focus on its core Midwestern operations.[6] 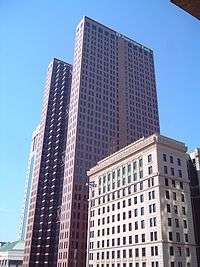 The company's "honeycomb" logo was unveiled in 1975 and has remained the company's trademark since that time.[11] 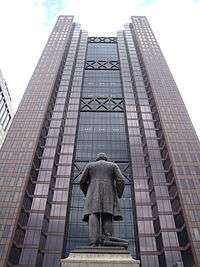 McKinley Monument and Huntington Building in May 2009

In 1980, Farmers & Merchants Bank, Milford Center and The First National Bank of Burton were merged with Huntington Bancshares.[10] In 1981, Huntington Bancshares announced it would acquire Alexandria Bank Company and renaming it, The Huntington State Bank with a loan production office opening in Cincinnati, Ohio. In 1982, Huntington Bacshares merged with the Reeves Banking and Trust Company.[10] Huntington acquired the tiny Savings Bank of Chillicothe, Ohio in the early 1980s, which gained some fame in 2011 when 100-year-old June Gregg revealed to Huntington officials that her father had opened a savings account for her as a baby with Savings Bank in 1913 and that she had subsequently kept the account open to the present day. Huntington officials, after doing research on the account in question, later confirmed it and gave her account a temporary increase in her interest rate to 5% as a centenarian present for her 98-year loyalty to Huntington and the Chillicothe branch's predecessor, Savings Bank.[12][13] In 1983, Huntington announced it would acquire Cleveland-based Union Commerce Bank.[14]

Huntington also had retail banking offices in Florida until 2002, when it sold these branches to SunTrust Banks to focus on its core Midwestern operations.[6] On January 27, 2004, Huntington Bancshares announced it would buy Unizan Financial Corp. based in Canton, Ohio.[15]

On December 20, 2006, Huntington Bancshares announced it would buy Sky Financial Group Inc. based in Bowling Green, Ohio.[16][17] This merger completed on July 1, 2007, although Sky branches did not change their branding until late September.[18][19] Huntington boosted its presence in Indiana and Ohio with the purchase and expanded into Western Pennsylvania for the first time.

Huntington formerly owned ATM's installed at locations of Pittsburgh-based restaurant chain Eat'n Park.[20] These are now operated by third-party ATM providers. In 2009, Huntington bid against rival Fifth Third Bank to acquire National City branches in the Pittsburgh region from PNC Financial Services. The Justice Department ordered PNC to sell the branches to avoid anti-trust concerns after it acquired National City. Huntington, which had entered the Pittsburgh market by way of the Sky acquisition, has been expanding in that market, and had considered the National City branches as a way to expand its market share.[21] Ultimately, PNC sold the overlapping branches to First Niagara Bank.[22] Huntington remains number 8 in deposits in Allegheny County, but has a stronger market share in neighboring counties.

On October 3, 2009, the Federal Deposit Insurance Corporation named Huntington as receiver of a $400 million deposit portfolio from the bank failure of Warren Bank in Warren, Michigan.[23] On December 18, 2009, Huntington signed a 45-day lease with the FDIC to run a bridge bank for the failed Citizens State Bank in New Baltimore, Michigan. In 2012, Huntington was in merger discussions with Flint, Michigan-based Citizens Republic Bancorp. Discussions stalled and FirstMerit -which would itself be acquired four years later by Huntington- purchased Citizens Republic in September 2012.[24] On October 10, 2013, Huntington announced it would acquire Ohio-based Camco Financial, holding company for Advantage Bank;[25] the merger was completed by March.[26] In April 2014, Huntington announced it would acquire 11 offices of Bank of America in Central Michigan, including the Port Huron and Saginaw markets. This raised the number of Huntington branches in Michigan to 173, including over 40 locations housed in Meijer stores.[27] The following month, Huntington bought 13 additional offices from Bank of America in Michigan, mostly in the Flint market. The locations became Huntington branches in September.[28] In 2015, Huntington Bancshares announced it would acquire Michigan-based Macquarie Equipment Finance, Inc. from Sydney, Australia-based Macquarie Group Ltd.. The transaction was completed on March 31, 2015.[29]

In January 2016, Huntington announced it would purchase Akron-based FirstMerit, subject to regulatory approval, in a deal that would make Huntington the largest bank in Ohio.[30] Due to anti-trust concerns by the Justice Department, 11 branches in Canton and two in Ashtabula were to be sold to First Commonwealth Bank.[31] Additionally 107 branches located within 2.5 miles of other Huntington / FirstMerit branches will be closed.[32] All remaining FirstMerit branches and accounts will be converted to Huntington on February 2017 over the President's Day weekend. [33] The deal made Huntington the largest bank in Ohio and briefly the 2nd largest Ohio-based bank after Fifth Third Bank until KeyCorp completed its acquisition of First Niagara Bank later in 2016; it also raised Huntington to number 2 in deposits in Cleveland behind KeyCorp, number one in Akron, Canton & Toledo, and solidified its number one spot in Youngstown.[34]

In 2012, Huntington started displaying old checks that were written by famous historical people, including 24 former U.S. Presidents such as Abraham Lincoln, George Washington, Thomas Jefferson, Andrew Jackson, Theodore Roosevelt, Franklin Roosevelt, and Niles, Ohio native William McKinley. Other famous historical people featured were checks signed by Charles Dickens, Thomas Edison, Ernest Hemingway, and Susan B. Anthony, among others.[35] The most notable check was one written by Lincoln to "self" for $800 dated April 13, 1865, the day before his assassination.[36] The checks are estimated to be worth over $75,000 today. Huntington acquired the checks in 1983 when it purchased Union Commerce Bank and received several boxes of old documents, but weren't discovered until 2011 when a Huntington employee was looking through the documents.[37]

In addition to the common stock, Huntington Preferred Capital also issued 2 million shares of preferred stock, paying a quarterly cash dividend of $0.4925 per share. This stock is largely held by the same companies as the common stock, but a small fraction of the available shares are sold on the open market.

Huntington Bancshares provides retail and commercial financial services in Indiana, Kentucky, Michigan, Ohio, Pennsylvania, and West Virginia.[39] Huntington also provides retail services online. In the first quarter of 2013, Huntington changed its ATMs to new ones that allow customers to make deposits without fumbling with deposit slips and envelopes; instead, they insert cash and checks directly into the ATM.[40] The bank started in 2014 offering ATM deposits from mobile phones and through online transfers until 11:59 p.m. and post them that day.[41] In another move, the bank will no longer count pending debit card transactions against available funds for purposes of calculating overdrafts or non-sufficient funds fees.[41] There also are selected financial service activities in other states, including offices in Florida, Cayman Islands, and Hong Kong.[1]