The Pittsburgh Tribune-Review, also known as "the Trib," is the second largest daily newspaper serving metropolitan Pittsburgh, Pennsylvania, in the United States. Founded on August 22, 1811 as the Greensburg Gazette and in 1889 consolidated with several papers into the Greensburg Tribune-Review,[2][3] the paper circulated only in the eastern suburban counties of Westmoreland and parts of Indiana and Fayette until May, 1992 when it began serving all of the Pittsburgh metropolitan area after a strike at the two Pittsburgh dailies, the Pittsburgh Post-Gazette and Pittsburgh Press, deprived the city of a newspaper for several months.

The Tribune-Review Publishing Company was owned by Richard Mellon Scaife, an heir to the Mellon banking, oil, and aluminum fortune, until his death in July 2014. Scaife was a major funder of conservative organizations, including the Arkansas Project. Accordingly, the Tribune-Review has maintained a conservative editorial stance, contrasting with the more liberal Post-Gazette.[4][5] In addition to its flagship paper, the company publishes 17 weekly community newspapers,[6] the Pittsburgh Pennysaver, as well as TribLIVE.com and TribTotalMedia.com.

The paper first began as the Gazette on August 22, 1811. After a series of name changes and mergers it became the Greensburg Daily Tribune in 1889. In 1924, it and the Greensburg Morning Review, launched by David J. Berry in 1903,[7][8] consolidated their interests under a single ownership.[9] Both papers continued separate publication until 1955, when they merged to form the Greensburg Tribune-Review.[9] Scaife bought the Tribune-Review in 1970. Scaife was a decade early in trying to unarm the Post-Gazette. In 1981–82, he started a short-lived eastern suburbs paper, The Daily-Sunday Tribune.[10]

Kent State and the Pulitzer

The Tribune-Review owns several "satellite" papers that insert or surround the regional publication with neighborhood specific stories. The Valley News Dispatch, of Pittsburgh suburbs Tarentum and New Kensington is one such satellite. Local journalism student John Filo worked for the publication while attending nearby Kent State University and served as the Valley News Dispatch's correspondent of the Kent State shootings. His photography that day has ascended to iconic status and won the paper its only Pulitzer Prize. 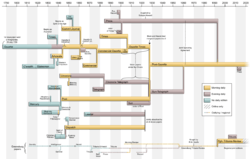 During a newspaper strike that temporarily shut down the Post-Gazette and ultimately closed the Pittsburgh Press, Scaife launched the Pittsburgh Tribune-Review, an edition of the Greensburg-based Tribune-Review covering Allegheny County and Pittsburgh.[10] Over time, it became a stand-alone newspaper headquartered on Pittsburgh's North Side. In 1997, Scaife added to his small collection of newspapers by purchasing The Daily Courier of Connellsville, the Leader Times of Kittanning and The Valley Independent of Monessen from Thomson Newspapers.[11]

In 2000, the Trib announced it would stop producing the twice-weekly Irwin-based paper, Standard Observer.[16] Citing a "sagging economy", the Trib laid off more than four percent of its workforce in 2003, including freelance writers.[17] More shakeups continued in 2005 as circulation numbers dropped and a top official left. An online message board featured back and forth fights between Pittsburgh and Greensburg employees.[17]

Edward Harrell, then-president of the Tribune Review Publishing Company, announced in January 2005 that most of the regional editions of the paper would have their newsroom, management and circulation departments merged and staff reductions would follow. The merged papers include the Tribune-Review of Greensburg, the Valley News Dispatch of Tarentum, The Leader-Times of Kittanning, The Daily Courier of Connellsville and the Blairsville Dispatch. The Valley Independent, the only paper with a unionized newsroom and contract, was not affected.[18]

The company incorporated as Trib Total Media in the summer of 2005, and purchased Gateway Newspapers, a community publication group servicing approximately 22 communities, at the time, in and around Pittsburgh's Allegheny County. Two managers were immediately laid off. The exact number of proposed redundancies was not announced.[19] In September 2005, Harrell announced his retirement as president of Tribune-Review Publishing Company, effective December 31, 2005. He had served as president since 1989.[20] Several staff writers were laid off in December 2005 as two of Gateway's newspapers were discontinued.

In May 2008, the Post-Gazette and the Trib reached a deal for one company to deliver both papers. The Post-Gazette would begin delivering the Trib to most of the area with some exceptions. Terms of the deal were not disclosed.[21] On June 20, 2008, Trib Total Media publicly announced it was closing several weekly newspapers in the Gateway Newspapers chain. The papers affected include: Bridgeville Area News, North Journal, McKnight Journal, Woodland Progress, Penn Hills Progress, Coraopolis-Moon Record and the Advance Leader. Many of those papers were several decades old.[22] The company also announced major changes to the remaining Gateway publications including a revamp of the Pennysaver in the communities that have Gateway newspapers.[23] Several published reports say the remaining community newspapers would expand coverage to include areas no longer serviced by Gateway publications. The communities served by those titles will now be served by other Gateway newspapers.[24]

In November, 2015, Trib Total Media announced that they would be cutting back on home delivery of printed newspapers and emphasize digital delivery.[25] The restructuring included the sale of two dailies and six weeklies to West Penn Media.[26] Two papers were closed,[27] The Daily News in McKeesport,[28] and The Valley Independent in Monessen.[29]

The remaining papers, in Pittsburgh, Greensburg and Tarentum, were consolidated into a single paper called the Tribune-Review. Home delivery was reduced in some parts of Allegheny and Westmoreland counties.[27] Trib Total Media laid off 153 full and part-time workers from its staff of approximately 1,100, another 68 had accepted buyouts in October.[25]

According to a press release, the Tribune-Review will go "all-digital" after it publishes its last print edition on November 30th, 2016.[30]

Carl Prine, an investigative reporter for the newspaper, conducted a probe with the CBS news magazine 60 Minutes that highlighted the lack of security at the nation's most dangerous chemical plants following the September 11, 2001 attacks.[31]

The reporters, and a CBS camera operator, were charged with trespassing at a Neville Island plant during their investigation.[32] They were later acquitted when the judge accepted that the story had been in the public interest.[33]

In 2007, Prine's further investigation into the subject was featured in the PBS documentary series Exposé: America's Investigative Reports, in a two-part episode titled "Think Like A Terrorist."

One Tribune-Review flap went national when Colin McNickle, editor of the newspaper's editorial page, attended a July 26, 2004 speech at the Massachusetts State House given by Teresa Heinz Kerry, who had been the subject of two negative articles in the Tribune-Review's opinion pages. After the speech, there was a dispute between McNickle and Heinz Kerry over her use of the term "un-American activity."

The Tribune-Review showed the highest gains in readership over the past five years of any newspaper in America's top 48 markets, which were dominated by sinking readership.

According to surveys by International Demographics Inc., an independent media research firm in Houston, the number of Tribune-Review readers jumped 17.8 percent from 2007 to 2012.[34]

As part of the Trib Total Media conglomerate, the Tribune-Review has a news exchange partnerships with WPXI, Pittsburgh's NBC affiliate and until 2013, it was a sister publication to Pittsburgh's second-largest news radio station, KQV. Trib Total Media is the Official Newspaper of the Pittsburgh Pirates and the Pittsburgh Penguins (the latter of which Scaife was a co-founder in 1967) and has strong partnerships with many nonprofit and community businesses and organizations throughout Western Pennsylvania.