As of November 2016, IPv6 adoption has crossed the 15.0% threshold. It is used more on weekends[1] and adoption is uneven across countries and providers.

By 2011, all major operating systems in use on personal computers and server systems had production-quality IPv6 implementations. Cellular telephone systems present a large deployment field for Internet Protocol devices as mobile telephone service is making the transition from 3G to "next-generation" 4G technologies, in which voice is provisioned as a Voice over Internet Protocol (VoIP) service. This mandates the use of IPv6 for such networks. In 2009 U.S. cellular operator Verizon released technical specifications for devices to operate on its "next-generation" networks.[4] The specification mandates IPv6 operation according to the 3GPP Release 8 Specifications (March 2009), and deprecates IPv4 as an optional capability.[4]

In the early 2000s, governments increasingly required support for IPv6 in new equipment. The U.S. government, for example, specified in 2005 that the network backbones of all federal agencies had to be upgraded to IPv6 by June 30, 2008; this was completed before the deadline.[5][6][7][8] The government of the People's Republic of China implemented a five-year plan for deployment of IPv6 called the China Next Generation Internet (see below).

Major providers of Internet services, both ISPs and content providers, also began to implement IPv6 access into their products.[9] 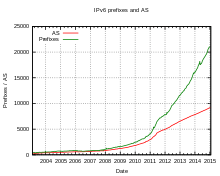 Number of IPv6 prefixes and AS on the Internet since 2003 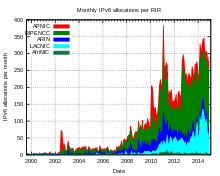 Google publishes statistics on IPv6 adoption among Google users. A graph of IPv6 adoption since 2008 and a map of IPv6 deployment by country are available.[10][11]

Akamai publishes by-country and by-network statistics on IPv6 adoption for traffic it sees on its global Content Distribution Network (CDN). This set of data also shows graphs for each country and network over time. [12]

A global view into the growing IPv6 routing tables can be obtained with the SixXS Ghost Route Hunter.[13] This tool provides a list of all allocated IPv6 prefixes and marks with colors the ones that are actually being announced into the Internet BGP tables. When a prefix is announced, it means that the ISP at least can receive IPv6 packets for their prefix.

The integration of IPv6 on existing network infrastructures current at any time can also be monitored from other sources, for example:

A few organizations are involved with international IPv6 test and evaluation, ranging from the United States Department of Defense to the University of New Hampshire.

By 2011, all major operating systems in use on personal computers and server systems had production-quality IPv6 implementations.[43] Microsoft Windows has supported IPv6 since Windows 2000, and in production-ready state beginning with Windows XP. Windows Vista and later have improved IPv6 support.[44] Mac OS X since Panther (10.3), Linux 2.6, FreeBSD, and Solaris also have mature production implementations. Some implementations of the BitTorrent peer-to-peer file transfer protocol make use of IPv6 to avoid NAT issues common for IPv4 private networks.[45]

has constructed a research center to study the possibilities of adopting IPv6 in the country. The center will operate alongside another facility, which is equipped with an IBM Blue Gene/P supercomputer.[62]

IPv6 deployment is slow but ongoing, with major Canadian ISPs (notably Shaw Communications, Bell Canada, Vidéotron, and Cogeco) lacking in support for its residential customers, and the majority of their business customers (including server packages). Canadian IPv6 usage jumped from 0.5% in July 2015 to 7% in Dec 2015 due to IPv6 deployment at Telus.

The China Next Generation Internet (CNGI, 中国下一代互联网) project is a five-year plan initiated by the Chinese government with the purpose of gaining a significant position in the development of the Internet through the early adoption of IPv6. China showcased CNGI's IPv6 infrastructure during the 2008 Summer Olympic Games, being the first time a major world event has had a presence on the IPv6 Internet.[74] At the time of the event, it was believed that the Olympics provided the largest showcase of IPv6 technology since the inception of IPv6.[75] The deployment of IPv6 was widespread in all related applications, from data networking and camera transmissions for sporting events, to civil applications, such as security cameras and taxis. The events were streamed live over the Internet and networked cars were able to monitor traffic conditions readily, all network operations of the Games being conducted using IPv6.[76]

Also, the CERNET (China Education and Research NETwork, 中国教育和科研计算机网, 教育网) set up native IPv6 (CERNET2), and since then many academic institutions in China joined CERNET2 for IPv6 connectivity. CERNET-2 is probably the widest deployment of IPv6 in China. It is managed and operated jointly by 25 universities.[77] Students in Shanghai Jiao Tong University and Beijing University of Posts and Telecommunications, for example, get native IPv6.[78][79]

As of December 2016, the country has only 2% IPv6 traffic (according to both Google and Apnic stats).

The ISP Fullrate[80] has began offering IPv6 to its customers, on the condition that their router (provided by the ISP itself) is compatible. If the router is of a different version, the customer has to request a new router.

As of December 2016, France has 13% IPv6 traffic (according to both Google and Apnic stats).

Magyar Telekom was running tests on its production environments since the beginning of 2009. Free customer trials started on November 2, 2009, for those on ADSL or Fiber Optic.[114][115] Customers are given a /128 via DHCP-ND unless they register their DUID in which case they receive a /56 - using a static configuration results in a single /64.

According to information on telecompaper.com,[116] UPC Hungary will start deploying IPv6 in mid-2013, finishing it in 2013.

In 2015 december RCS&RDS (Digi) has enabled native dual stack IPv6(customers receive dynamic /64 prefixes) for its FTTB/H customers.[117][118][119][120] In november the same year UPC hungary intruduced DS Lite(with private IPv4 addresses)[121] which can be enabled on a customer-to-customer basis if the customer asks for it.

As of 2012, surveys conducted by the New Zealand IPv6 Task Force indicated that awareness of IPv6 had reached a near-universal level among New Zealand's large public- and private-sector organisations, with adoption mostly occurring as part of normal network refresh cycles. Most of New Zealand's ISP and carrier community have a test environment for IPv6 and many have started bringing IPv6 products and services on-stream.[162] An increasing number of New Zealand Government websites are available over IPv6, including those of the Ministry of Defence (New Zealand), Ministry for Primary Industries (New Zealand), Ministry of Social Development and the Department of Internal Affairs.

The government is in process of upgrading its facilities. Globe Telecom has already set in motion the transition of its core IP network to IPv6, noting that it is now fully prepared even as the Internet runs out of IPv4 addresses. Globe claims it is the first local telecommunication company to test IPv6 with Department of Science and Technology (Philippines). In some cases, like test networks or users, IPv6 or both maybe present.[165]

By November 2012, all telecom operators are becoming IPv6 enabled, this wast tested for the first time at the AFRINIC-17 meeting held in Khartoum.[172]