Indians in the United Arab Emirates

Indians in the United Arab Emirates (UAE) constitute the largest part of population of the country. Over 2.2 million Indian migrants (mostly from the states of Kerala and Tamil Nadu in South India) are estimated to be living in the UAE,[2] who form over 30% of the total population of the UAE.[1] A majority of Indians live in the three largest cities of the UAE — Abu Dhabi, Dubai and Sharjah. Indian contact with the emirates that now constitute the UAE dates back several centuries, as a result of trade and commerce between the emirates and India. More recently, the UAE has experienced a tremendous increase in the population of Indians who, having migrated to the country as a result of opportunities in petroleum, finance and other industries. While most Indian migrants support the financial, manufacturing, and transport industries, a sizeable minority of migrants are involved in professional services and entrepreneurship. Relations between India and the UAE have traditionally been friendly, though recent incidents relating to the treatment of the Indian migrant labour force by companies in the UAE have been the source of friction and outrage in India. 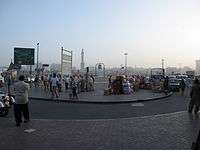 About 85% of Dubai's population consists of foreign migrants, a majority of whom are from India.

Countries in the Persian Gulf region have had a long-established economic and political link with India. Trucial Oman (now UAE), was nominally independent in the 19th century but was administered by the British Raj; trade and banking sectors in the territory were administered by the Khoja and Kutchi communities of India. In 1853, the rulers of the emirates signed a Perpetual Maritime Truce with the British, effectively bringing the region under Britain's sphere of influence. Administered from British India, the emirates developed commonalities with South Asia. Indian Rupees were used as currency, as were Indian stamps (overlaid with the name of the emirate) for postal correspondence.[3] A fairly homogeneous society at the turn of the 20th century, the region that now comprises the UAE experienced an economic boom as a result of the pearling industry; the few Indian traders emigrating to the emirates moved to the coastal towns and remained on the fringes of Emirati society.[4] Dubai had traditionally served as an entrepôt for trade between the Middle East and the Indian subcontinent and was dominated by Hindu merchants in both gold and textile trade.[5] Dubai was also an important trading post for Indians prior to the discovery of oil (in commercial quantities) in the UAE in 1959;[4] the emirate had been at the centre of a smuggling route of gold to India via small boats, where the importation of gold was illegal.[6]

The discovery of oil brought with it an influx of workers from India in the 1960s. Many came via sea, a trip of about three days from Bombay (now Mumbai) to Dubai. Most of the shopkeepers were from the state of Kerala, or were Indian Arabs, descendants of Arabs who had previously emigrated to India. It was also in the late 1960s that the Hindu Temple and first Indian schools were built for expatriate Indian families. Indian migration to the UAE drastically increased in the 1970s and 1980s, with the expansion of the oil industry and the growth of free trade in Dubai. Annual migration of Indians to the UAE, which stood at 4,600 in 1975, rose to over 125,000 by 1985, and stood at nearly 200,000 in 1999.[7]

In the 4 million migrants, 1 million are from Kerala and 450,000 from Tamil Nadu, form the majority in Indian community living in UAE. By 1999, the population of Indian migrants in the UAE, which stood at 170,000 in 1975, was at 750,000.[7] The estimated population of Indians in the UAE as of 2009 is near 2 million. Indians constitute 42% of the total UAE population. A majority of Indians in the UAE (approximately 50% - 883,313 in 2011[8]) are from the South Indian state of Kerala, followed by migrants from Tamil Nadu. The majority of Indians are Muslim (50%), followed by Christian (25%) and Hindu (25%). Naturalisation and citizenship is harder than some other countries and even if you are a citizen, your nationality can be taken away for a variety of reason. A vast majority of Indian migrants are on employment based visas, while others are on business or trade visas. Some are also on spouse visas which can then be converted to Citizenship after a long time. Approximately 26% of Indian migrants live in apartments or villas in the large cities of Abu Dhabi, Dubai and Sharjah, while 15% live in rented rooms in cities. The remaining migrants (about one-third) live in collective labour accommodations (referred to as labour camps), such as those in Mussafah (Abu Dhabi) or Sonapur (Dubai).

In addition, over 300,000 undocumented migrants, many of whom are Indian, are said to be living in the UAE.[9] Undocumented migrants, if caught, are jailed and then deported to their home countries. A federal law enacted in 1996 in the U.A.E imposed sanctions against undocumented migrants and their employers. The UAE government offers amnesty programmes where foreign undocumented workers can voluntarily leave the country without facing imprisonment or having to pay fines. One such three month amnesty program in 2007 benefited 110,000 illegal Indian migrants, all of whom were either legally reabsorbed into the UAE workforce or allowed to return to India without sanctions or imprisonment.[10]

Foreigners comprise 99% of the UAE's labour force, of which Indians are a part of.[11] Some of these foreigners have lived in the country for generations. Around 40% of Indians in the UAE are white collar professionals.[12] In addition to employment-based migrants from India, many Indian entrepreneurs in the UAE have established successful national franchises, the notable ones such as Landmark Group, Lulu Hypermarkets, Jashanmal, Ajmal Perfumes, Jumbo Electronics, Choithram's, the Varkey Group, Alukkas and New Medical Centre.

The Dubai-based Indian millionaires include Micky Jagtiani of the Landmark Group, Yousuf Ali of EMKE group, Ravi Pillai of the Ravi Pillai Group, the Chhabria family of the Jumbo Group, Sunny Varkey of GEMS Education, Tony Jashanmal of the Jashanmal Group and Joy Alukas of Joyalukas Jewellery.

Yogesh Mehta of Petrochem ME, Rizwan Sajan of Danube Group, Deepak Babani of Eros, Azad Moopen of Aster DM Healthcare, Ramesh S Ramakrishnan of the Transworld Group, Santosh Joseph of Dubai Pearl and Lachmandas Pagarani of the Al-Maya Group are also on the list of Indian millionaires living in Dubai.[13]

The Gulf Medical University founded by Thumbay Moideen is an Indian contribution to the Higher Education scenario in the UAE. Today students from over 68 countries study in their campus in Ajman and the University is well known in the medical education circles.

Adnan Chilwan, Group CEO of Dubai Islamic Bank, one of the most respected banking professionals in UAE,[14] and Kamal Puri, Founder President of Skyline University, an influencer in the UAE Education Ecosystem,[15] are also some of the few well known Indians in the UAE.

By 1996, at least 150 Indian companies were operating in the Jebel Ali Free Zone Area (JAFZA),[7] and even today, more than 50% of work force are Indian only in one of the most successful and role model Free Trade Zone of world. Over 25% of Indian workers in the UAE were engaged in manufacturing, transport and related professions, while 20% were engaged in professional and technical fields.[16] The 2005 Merrill Lynch report estimated that there were approximately 33,000 Indian millionaires living in the UAE.[17] Indian expats typically save most of their earnings through employment benefits on accommodation and transport, and income tax free provisions of the UAE.[7] As a result, a majority of the money is remitted for the maintenance of migrants' households in India. In 2005, an estimated US$7 billion was remitted, about half of which was sent through informal hawala channels. About 70% of all remittances from the UAE (or US$5 billion) was sent to India, with 60% alone being remitted to Kerala.[18]

A small number of Indian migrants have been involved in criminal activities in the Middle East, including smuggling, trade in narcotics, extortions and other activities.[7] Dubai, in particular has been associated with the smuggling of gold and precious metals. Dawood Ibrahim, head of the organised crime syndicate D-Company, is estimated to have smuggled 20 to 30 tonnes of gold to India. .[7]

India and the UAE (United Arab Emirates) have generally enjoyed cordial relations, partly due to their shared history with the British presence in Asia, and partly due to the pre-colonial history of trade, commerce and settlement between the two nations. In 1999, the UAE government secured the release of 25 civilian passengers on board Indian Airlines flight IC-814 that had been hijacked and forced to land in Dubai en route to New Delhi from Kathmandu, Nepal.[19] However, several incidents, mainly concerning India's expatriate workforce in the UAE, have caused friction in Indo-Emirati relations.[20][20] 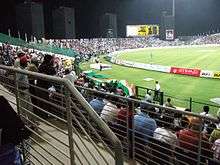 India vs Pakistan cricket charity match at the Sheikh Zayed Cricket Stadium in Abu Dhabi in 2007.

The large segment of Indian migrants, along with comparatively lenient laws in the UAE[7] have allowed Indian communities to more or less practice their native cultures in the country. Middle class Indians in the UAE have established a network of cultural associations which cater to their needs. Cultural associations such as the India Club, Indian Association, Goan Cultural Society and numerous Keralite associations support cultural networks of the Indian sub-communities in the UAE. Additionally, schools such as the Abu Dhabi Indian School and The Indian High School, Dubai provide Indian curricular education to expatriate students. Dubai is the only emirate in the UAE with a Hindu temple and Sikh Gurudwara. In August 2015, in the backdrop of Prime Minister Narendra Modi's visit of the country, the UAE government decided to allot land for the construction of a temple in Abu Dhabi.[12] Non-Muslims are allowed to conduct their religious ceremonies in their private homes without interference. Dubai and Sharjah are the only emirates with operating cremation facilities in the Emirates. Official permission must be obtained for their use in every instance. Churches exist in Abu Dhabi, Dubai, Sharjah and Ras Al-Khaimah. In 1998, the government of Dubai donated land for the construction of a facility to be shared by five congregations, four Protestant and one Catholic. Non-Muslims may practice their religions but may not proselytise publicly.[21]

Restaurants serving Indian food are very popular and widely available in the Emirates. Many of the hotels in Dubai and Abu Dhabi have Indian restaurants that serve Mughlai or Tandoor cuisine, while vegetarian South Indian are available and popular in the larger cities of the UAE.

India-Pakistan cricket matches are widely followed by the Indian diaspora in the UAE. The Sharjah Cricket Association Stadium, established by Abdul Rahman Bukhatir, hosted several India & Pakistan matches and triangular tournaments through the 1980s and 1990s, which attracted Indian and Pakistani cricket spectators from the UAE as well as from India and Pakistan. More recently, the state-of-the-art Sheikh Zayed Cricket Stadium in Abu Dhabi has hosted bilateral and triangular cricket tournaments featuring India and Pakistan. 2014 also marked the official entry of the Indian Premier League (IPL) into UAE with matches held in Abu Dhabi, Dubai & Sharjah.

Bollywood and kollywood are popular among Indian expatriates and are shown in most major theatres in the Emirates' main cities. Award ceremonies such as the International Indian Film Academy Awards as well as Filmfare Awards have previously been held in Dubai; the city is also a popular destination for filming indian films.