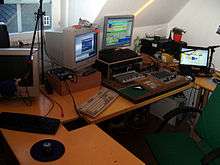 Internet radio (also web radio, net radio, streaming radio, e-radio, online radio, webcasting) is an audio service transmitted via the Internet. Broadcasting on the Internet is usually referred to as webcasting since it is not transmitted broadly through wireless means.

Internet radio involves streaming media, presenting listeners with a continuous stream of audio that typically cannot be paused or replayed, much like traditional broadcast media; in this respect, it is distinct from on-demand file serving. Internet radio is also distinct from podcasting, which involves downloading rather than streaming.

Internet radio services are usually accessible from anywhere in the world with a suitable internet connection available; one could, for example, listen to an Australian station from Europe and America. This has made internet radio particularly suited to and popular among expatriate listeners. Nevertheless, some major networks like CBS Radio, Pandora Radio, and Citadel Broadcasting (except for news/talk and sports stations) in the United States, and Chrysalis in the United Kingdom, restrict listening to in-country due to music licensing and advertising issues.

Internet radio is also suited to listeners with special interests that are often not adequately served by local radio stations. 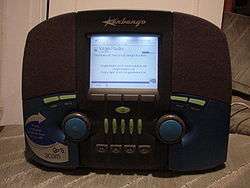 Internet radio is typically listened to on a standard home PC or similar device, through an embedded player program located on the respective station's website. In recent years, dedicated devices that resemble and offer the listener a similar experience to a traditional radio receiver have arrived on the market.

Streaming technology is used to distribute Internet radio, typically using a lossy audio codec. Streaming audio formats include MP3, Ogg Vorbis, Windows Media Audio, RealAudio, and HE-AAC (or aacPlus).[1] Audio data is continuously transmitted serially (streamed) over the local network or internet in TCP or UDP packets, then reassembled at the receiver and played a second or two later. The delay is called lag, and is introduced at several stages of digital audio broadcasting.[2]

A local tuner simulation program includes all the online radios that can also be heard in the air in the city.

In 2003, revenue from online streaming music radio was US$49 million. By 2006, that figure rose to US$500 million.[3] A February 21, 2007 "survey of 3,000 Americans released by consultancy Bridge Ratings & Research" found that "[a]s much as 19% of U.S. consumers 12 and older listen to Web-based radio stations." In other words, there were "some 57 million weekly listeners of Internet radio programs. More people listen to online radio than to satellite radio, high-definition radio, podcasts, or cell-phone-based radio combined."[3][4] An April 2008 Arbitron survey[5] showed that, in the US, more than one in seven persons aged 25–54 years old listen to online radio each week.[6] In 2008, 13 percent of the American population listened to the radio online, compared to 11 percent in 2007. Internet radio functionality is also built into many dedicated Internet radio devices, which give an FM like receiver user experience.

In the fourth quarter (Q4) of 2012, Pandora and other subscription-based and free Internet radio services accounted for nearly one quarter (23 percent) of the average weekly music listening time among consumers between the ages of 13 and 35, an increase from a share of 17 percent the previous year.[7]

Internet radio was pioneered by Carl Malamud. In 1993, Malamud launched "Internet Talk Radio" which was the "first computer-radio talk show, each week interviewing a computer expert.".[9][10] The first Internet concert was broadcast on June 24, 1993 by the band Severe Tire Damage[11][12]

In November 1994, a Rolling Stones concert was the "first major cyberspace multicast concert." Mick Jagger opened the concert by saying, "I want to say a special welcome to everyone that's, uh, climbed into the Internet tonight and, uh, has got into the M-bone. And I hope it doesn't all collapse."[13]

On November 7, 1994, WXYC (89.3 FM Chapel Hill, NC USA) became the first traditional radio station to announce broadcasting on the Internet. WXYC used an FM radio connected to a system at SunSite, later known as Ibiblio, running Cornell's CU-SeeMe software. WXYC had begun test broadcasts and bandwidth testing as early as August 1994.[14] WREK (91.1 FM, Atlanta, GA USA) started streaming on the same day using their own custom software called CyberRadio1. However, unlike WXYC, this was WREK's beta launch and the stream was not advertised until a later date.[15]

In March 1996, Virgin Radio - London, became the first European radio station to broadcast its full program live on the internet.[19] It broadcast its FM signal, live from the source, simultaneously on the Internet 24 hours a day.[20]

Internet radio attracted significant media and investor attention in the late 1990s. In 1998, the initial public stock offering for Broadcast.com set a record at the time for the largest jump in price in stock offerings in the United States. The offering price was US$18 and the company's shares opened at US$68 on the first day of trading.[21] The company was losing money at the time and indicated in a prospectus filed with the Securities Exchange Commission that they expected the losses to continue indefinitely.[21] Yahoo! purchased Broadcast.com on July 20, 1999[22] for US$5.7 billion.[23]

With the advent of streaming RealAudio over HTTP, streaming became more accessible to a number of radio shows. One such show, TechEdge Radio in 1997 was broadcast in 3 formats - live on the radio, live from a RealAudio server and streamed from the web over HTTP.

A rancorous dispute ensued over how performance royalties should be assessed for Internet broadcasters.[3][23][26][27][28][29][30] Some observers said that royalty rates that were being proposed were overly burdensome and intended to disadvantage independent Internet-only stations[26]—that "while Internet giants like AOL may be able to afford the new rates, many smaller Internet radio stations will have to shut down."[29] The Digital Media Association (DiMA) said that even large companies, like Yahoo! Music, might fail due to the proposed rates.[3] Some observers said that some U.S.-based Internet broadcasts might be moved to foreign jurisdictions where US royalties do not apply.[28]

Many of these critics organized SaveNetRadio.org, "a coalition of listeners, artists, labels and webcasters"[27] that opposed the proposed royalty rates. To focus attention on the consequences of the impending rate hike, many US Internet broadcasters participated in a "Day of Silence" on June 26, 2007. On that day, they shut off their audio streams or streamed ambient sound, sometimes interspersed with brief public service announcements voiced, written and produced by popular voiceover artist Dave Solomon.[31] Notable participants included Rhapsody, Live365, MTV, Pandora, Digitally Imported and SHOUTcast.

Some broadcasters did not participate, such as Last.fm, that had just been purchased for US $280 million by CBS Music Group.[32] According to a Last.fm employee, they were unable to participate because participation "may compromise ongoing license negotiations."[33]

SoundExchange, representing supporters of the increase in royalty rates, pointed out the fact that the rates were flat from 1998 through 2005 (see above), without even being increased to reflect cost-of-living increases. They also declared that if internet radio is to build businesses from the product of recordings, the performers and owners of those recordings should receive fair compensation.

On May 1, 2007, SoundExchange came to an agreement with certain large webcasters regarding the minimum fees that were modified by the determination of the Copyright Royalty Board. While the CRB decision imposed a $500 per station or channel minimum fee for all webcasters, certain webcasters represented through DiMA negotiated a $50,000 "cap" on those fees with SoundExchange.[34] However, DiMA and SoundExchange continue to negotiate over the per song, per listener fees.

SoundExchange has also offered alternative rates and terms to certain eligible small webcasters, that allows them to calculate their royalties as a percentage of their revenue or expenses, instead of at a per performance rate.[35] To be eligible, a webcaster had to have revenues of less than US $1.25 million a year and stream less than 5 million "listener hours" a month (or an average of 6830 concurrent listeners).[36] These restrictions would disqualify independent webcasters like AccuRadio, Digitally Imported, Club977 and others from participating in the offer, and therefore many small commercial webcasters continue to negotiate a settlement with SoundExchange.[37]

An August 16, 2008 Washington Post article reported that although Pandora was "one of the nation's most popular Web radio services, with about 1 million listeners daily...the burgeoning company may be on the verge of collapse" due to the structuring of performance royalty payment for webcasters. "Traditional radio, by contrast, pays no such fee. Satellite radio pays a fee but at a less onerous rate, at least by some measures." The article indicated that "other Web radio outfits" may be "doom[ed]" for the same reasons.[38]

On September 30, 2008, the United States Congress passed "a bill that would put into effect any changes to the royalty rate to which [record labels and web casters] agree while lawmakers are out of session."[39] Although royalty rates are expected to decrease, many webcasters nevertheless predict difficulties generating sufficient revenue to cover their royalty payments.[39]

In January 2009, the US Copyright Royalty Board announced that "it will apply royalties to streaming net services based on revenue."[40] Since then, websites like Pandora Radio, AccuRadio, Mog, 8tracks and even recently Google Music have changed the way people discover and listen to music.

The Webcaster Settlement Act of 2009 expired in January 2016, ending a 10-year period in which smaller online radio stations, Live365 among them, could pay reduced royalties to labels. On January 31, 2016, webcasters who are governed by rules adopted by the Copyright Royalty Board were required to pay to SoundExchange an annual, nonrefundable minimum fee of $500 for each channel and station.[41] the fee for services with greater than 100 stations or channels being $50,000 annual.[42]