Quod Libet is a cross-platform free and open-source audio player, tag editor and library organizer. The main design philosophy is that the user knows how they want to organize their music best; the software is therefore built to be fully customizable and extensible using regular expressions. Quod Libet is based on GTK+ and written in Python, and uses the Mutagen tagging library. Ex Falso is the stand-alone tag-editing app (no audio) based on the same code and libraries.

Quod Libet is very scalable, able to handle libraries with tens of thousands of songs with ease. It provides a full feature set including support for Unicode, regular expression searching, key bindings to multimedia keys, fast but powerful tag editing, and a variety of plugins.

Quod Libet is available on most Linux distributions, FreeBSD, Mac OS X, and Windows as well, requiring only PyGObject, Python, and an OSS or ALSA compatible audio device. The Xfce desktop disk image provided by the Debian project installs Quod Libet as the default audio player. 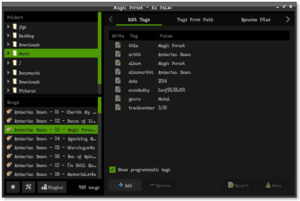 The tag editor interface, used by both Quod Libet and Ex Falso, that allows any tag to be changed as well as any file to be renamed or moved. 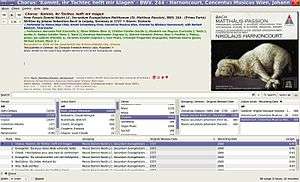 Quod Libet is currently bundled with over 60 Python-based plugins, including: