The intimate parts of the human body must, according to Islam, be covered by clothing. Exposing the intimate parts of the body is unlawful in Islam as the Quran instructs the covering of genitals, and for adult females the breasts. Exposing them is regarded as sin. Precisely which body parts must be covered varies between different schools of Islamic thought. The Quran admonishes Muslim women to dress modestly and cover their breasts and genitals.[1] The Quran explicitly states that "O wives of the Prophet, you are not like anyone among women" (Quran 33: 32) and as such has separate rules specifically for the wives of the Prophet.[2] Currently 'Awrah may be exposed for emergencies such as surgery. There is no reference where this is permitted.

The word Erva (ערווה) first appears in the Hebrew bible in Leviticus 18:6.[3] The verse reads as follows, with the word erva being translated to nakedness.

None of you shall approach to any that is near of kin to him, to uncover their nakedness. I am the LORD[4]

The term has since been used in the Talmud as both a blanket term for all prohibited sexual acts (עריות) and to describe parts of a female considered to be immodest and sexually provocative including a woman's hair, thighs, and singing voice. The term continues to be used in many other sources of Jewish law and is still used in modern Hebrew today to mean either prohibited sexual acts or sexual organs.

In Arabic, the term 'awrah or 'awrat (Arabic: عورة‎‎) derives from the root ‘a-w-r which means "defectiveness", "imperfection", "blemish" or "weakness". However, the most common English translation is "nakedness".[5]

In Persian and Kurdish (Persian: عورت‎‎) as well as Urdu, the word 'awrat derived from the Arabic 'awrah, had been used widely to mean "woman". Consulting Mohammad Moin's dictionary of Persian, 'awrah leads to two significations:

Other derivatives range in meaning from blind in one eye, false or artificial, among others.[7] Traditionally the word 'awrat, alongside the word za'ifeh (which derives from Arabic ḍa'īf (Arabic: ضعيف‎‎), meaning weak) has been associated with femininity and women who lived under the protection of a man. In modern-day Iran, using the two words ( 'awrah and za'ifah) to refer to women is uncommon and is considered sexist language. Instead, the words zan and xânom are used. In Tajikistan and Uzbekistan, the word za'if is still used in the Tajik dialect of Persian and its subdialects.

In Turkish, avrat is one of the ways to say 'woman', but is used more in the rural area and may also mean 'wife', especially the way the husband calls his wife. 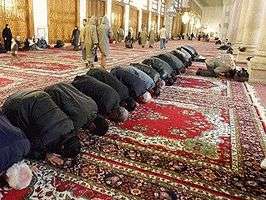 Muslims performing the ritual prayer. During the Salat, the awrah must be covered.

The term 'awrah as it is used in the Quran is confined neither to women nor to the body. The Quranic text reveals the use of the term in various passages Surah An-Nur and Surah Al-Ahzab.

The below verse is about privacy as the Quranic text states:

"... and let those among you who have not yet come to the age of puberty ask your permission (before they come to your presence) on three occasions; before the morning prayer, and while you put off your clothes for the noonday (rest), and after the late-night prayer. (These) three times are of privacy for you, other than these times there is no sin on you or on them to move about, attending (helping) each other."[8]

Another passage in the Quran that uses the term 'awrah, is in Surah Al-Ahzab where it concerns fleeing from battle.

It states: "A group of them ask the Prophet for leave, saying, "Our houses are 'awrah", even though their houses are not awrah. Their intent is to flee the battle. "[9]

There is another context that relates the story of creation of Adam and Eve in the Garden. In these two instances, the term saw’ah is used as an equivalent to 'awrah.

"O ye children of Adam! We have bestowed dress upon you to cover your nakedness...".[11]

Another word which almost has the same meaning of 'awrah, is the word farj (Arabic: فرج‎‎) the plural is furuj (Arabic: فروج‎‎).[12] Another quote concerning covering the 'awrah is:

"O Prophet! Tell your wives and your daughters, and the believing women, to draw their cloaks (veils) over their bodies. That will be better that they should be known (as respectable woman) so as not to be annoyed. And Allah is Ever Oft-Forgiving, Most Merciful." -Al-Ahzab:59 (Qur'an)

The Quran admonishes Muslim women to dress modestly and cover their breasts and genitals.[1] The Quran explicitly states that "O wives of the Prophet, you are not like anyone among women" (Quran 33: 32) and as such has separate rules specifically for the wives of the Prophet. The Qur'an tells the male believers (Muslims) to talk to the wives of the Prophet Muhammad from behind a hijab (curtain). [Quran 33:53] However, many people often mistake that for rules for all Muslim women. The Quran has no requirement that women cover their faces with a veil.[13] Though the Qur'an does not explicitly mention the word hijab, the clearest verse on the requirement of the hijab is surah 24:30–31, asking women to draw their khimār (head scarves) over their bosoms.[14][15]

In the following verse, the wives of the Prophet and believing women are asked to draw their jilbab (outer garments) over them (when they go out), as a measure to distinguish themselves from others (as Muslim women), so that they are not harassed. Surah 33:59 reads:[15]

Those who harass believing men and believing women undeservedly, bear (on themselves) a calumny and a grievous sin. O Prophet! Enjoin your wives, your daughters, and the wives of true believers that they should cast their outer garments over their persons (when abroad): That is most convenient, that they may be distinguished and not be harassed. [...] (Quran 33:58–59)

The author of Majma' Al-Bayan has commented on this Hadith:

Awrah refers to anything which can be easily harmed just like a bare or exposed place. Therefore it becomes clear that the body of a woman is referred to as vulnerable because it is like a house which contains no walls and can be easily harmed and must be covered with the appropriate clothing.[16]

Differences between men and women

Pilgrims head to the 'mountain of mercy'.

Women's 'awrah is a more complicated issue and it changes according to the situation. 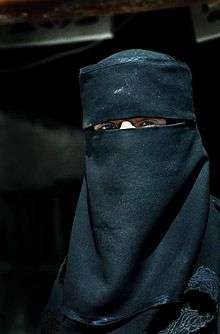 A Yemeni woman covering her face with niqab. Some women who wear the niqab believe that a woman's face is also part of her 'awrah. 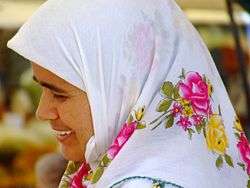 A Turkish woman wearing a headscarf. Most Muslims hold that the face and the hands are excluded from 'awrah parts.

Whether a woman was obligated to cover her face is more controversial. Most contemporary scholars agree that women's covering of the face was not mandated by the Quran or by the traditions of Muhammad. However, many classical jurists held that such covering was nonetheless strongly recommended, or even required in times of fitnah. Al-Razi, for example, held that by covering her face a married woman made clear that she was not available. Notably, a man is permitted and even encouraged to look at the face of a woman he is considering marrying, even in countries where he normally would not be allowed to.

In the contemporary world, some Muslims insist that a woman's awrah in front of unrelated men is her entire body including her face and hands, which must be covered at all times in front of non-mahram men.[26][27][28] The practice of covering the face is common in several Muslim countries, such as Saudi Arabia, Bahrain, Yemen, Oman. It is not common in other majority Muslim countries like Malaysia, Indonesia, present-day Iran, present-day Turkey and majority of south Asia. These differences reflect different interpretations and understanding of Sharia regarding wearing a niqab. 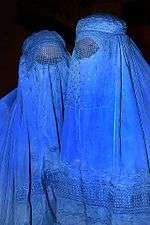 Afghan women wearing shuttlecock burqas, the most concealing of all Islamic veils. It covers the entire face and body, leaving just a mesh screen to see through.

Some Muslim women, particularly those living in Europe or in South East Asia, wear the headscarf. The type most commonly worn in the West is a square scarf that covers the head and neck but leaves the face clear. Other styles also cover the hair, neck and shoulders completely, but the face and the hands are not covered, as they are not considered awrah for those Muslims who wear it.

According to most scholars, the woman’s voice is NOT (see quotation)awrah in principle, for according to the Hadith, women used to complain to the Prophet and ask him about Islamic matters.[29] However, women are not allowed to speak in a soft or alluring voice.[30]

In Islam, women are allowed to sing but are not allowed to call the Adhan or pronounce the Talbiyah aloud in Hajj. As narrated by Aisha (the wife of Muhammad): "That once Abu Bakr came to her on the day of 'Id-ul-Fitr or 'Id ul Adha while the Prophet was with her and there were two girl singers with her, singing songs of the Ansar about the day of Buath. Abu Bakr said twice. "Musical instrument of Satan!" But the Prophet said, "Leave them Abu Bakr, for every nation has an 'Id' (i.e. festival) and this day is our 'Id." Not only women, men are not allowed to sing the current and age songs. Singing pop songs is not encouraged. A women's voice is awrah when she sings as men may get attracted to it.

Also, according to the tradition, in the ritual prayer, a woman should invite the attention of the Imam by clapping, instead of saying "Subhanallah" which is for men. There is a difference of opinion whether or not a woman can recite the Quran when in the presence of non-mahram men.

Certain scholars have concluded from the above differences that a woman's voice is also her awrah in some cases.[31][32][33]