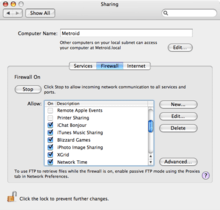 ipfirewall or ipfw is a FreeBSD IP packet filter and traffic accounting facility. Its ruleset logic is similar to many other packet filters except IPFilter. ipfw is authored and maintained by FreeBSD volunteer staff members. Its syntax enables use of sophisticated filtering capabilities and thus enables professional users to satisfy advanced requirements. It can either be used as a loadable kernel module or incorporated into the kernel; use as a loadable kernel module where possible is highly recommended. ipfw was the built-in firewall of Mac OS X[1][2] until Mac OS X 10.7 Lion when it was replaced with the OpenBSD project's PF. Like FreeBSD, ipfw is open source. It is used in many FreeBSD-based firewall products, including m0n0wall and FreeNAS. A port of ipfw and the dummynet traffic shaper is available for Linux, OpenWrt and Microsoft Windows.[3] wipfw is a Windows port of an old (2001) version of ipfw.[4]