It is one of the fastest growing and most successful businesses of its kind. JB Hi-Fi's main competitors are Harvey Norman and The Good Guys, as well as Myer, David Jones and Target Australia and Big W

The company (which is publicly listed on the ASX) has its Head Office at Chadstone Shopping Centre in Melbourne. There are 112 stores alone combining VIC, NSW, ACT & TAS (South-East Australia). 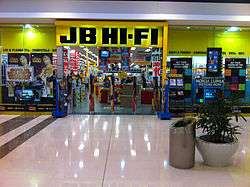 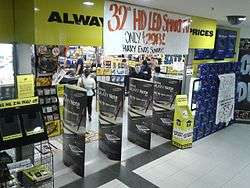 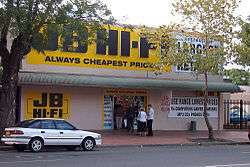 JB Hi-Fi was established in the Melbourne suburb of Keilor East by John Barbuto in 1975. Barbuto sold the business in 1983 to Richard Bouris ,David Rodd & Peter Caserta who expanded JB Hi-Fi into a chain of ten stores in Melbourne and Sydney turning over $150 million by 2000, when they sold the majority of their holding to private equity. It was subsequently floated on the Australian Stock Exchange in October 2003.[1]

At first, the company specialised in Hi-Fi equipment. As the mainstream popularity of vinyl records declined, in 1991 JB Hi-Fi cleared out their entire stock of records and began offering exclusively CDs, and were one of the first Australian music retailers to do so. (However, due to the recent revival of vinyl records larger stores began to stock them again.) This allowed JB Hi-Fi to open many new stores in Melbourne and later expand to other states. The chain now has stores all around Australia and in New Zealand's largest cities.

Recently, while many music stores claim to have been losing money, JB Hi-Fi has increased profits by 26% FY10 when compared to 2008/2009. [2] JB also specialises in imported CDs, mainly from the United Kingdom and the United States, although CDs from other places, such as Africa, Asia and South America are available on special order.

In June 2007 that JB Hi-Fi was Australia's biggest CD retailer and is second in terms of sales of computer games, televisions and car stereos.[4]

On 13 December 2006, JB Hi-Fi acquired the Hill and Stewart chain of electronics stores selling and operating in New Zealand for NZ$17.5 million (A$15.3 million).

In June 2007, JB Hi-Fi expanded its foothold in the Australian market by opening a Sydney branch of Clive Anthonys at the Home Hub Castle Hill (formerly Supa Centre and The Hills Homemaker Centre) which departed from the market that they had already established a strong presence in as Clive Anthonys specialise in white goods.

In February 2010, JB Hi-Fi ceased to renew leases on Hill and Stewart stores in New Zealand and liquidated the business, citing management's wish to build the JB Hi-Fi brand in New Zealand.[7]