This article is about the soldier and politician. For others with the same name, see John Quincy (medical writer) and John Quincy (Minnesota politician).

Colonel John Quincy (July 21, 1689 – July 13, 1767) was an American soldier, politician and member of the Quincy political family. His granddaughter Abigail Adams named her son, John Quincy Adams, after him. The city of Quincy, Massachusetts is named after him.[1]

John Quincy was born in Boston, Massachusetts to Daniel Quincy (1651–1690) and Anna Shepard (1663–1708). Shortly after his birth, the family moved to Braintree, Massachusetts and established a homestead at Mount Wollaston, or Merry Mount, in what is present-day Quincy. Daniel died when John was one year old; his mother subsequently married the Reverend Moses Fiske. Quincy attended Harvard College, graduating in 1708.

Quincy's paternal grandparents were Edmund Quincy II (1628-1698) and his second wife, Elizabeth Gookin Eliot (1645–1700)(impossible - she would have been 5 or 6 years old; must have been Edmund's first wife, Johanna Hoar), who built the Dorothy Quincy House (1685). His paternal grandfather's father was Edmund Quincy (1602-1636), known as "the Puritan", was an early English settler of Massachusetts Bay Colony. His paternal grandmother's father was Daniel Gookin (1612–1687), a settler of Virginia and Massachusetts from Ireland.[2]

When his maternal grandmother died in 1709, Quincy inherited Mt. Wollaston, an estate purchased by his great-grandfather, Captain William Tyng, one of Boston's wealthiest merchants, who had acquired the property and other lands from William Coddington (1601–1678), who was in exile.[3] 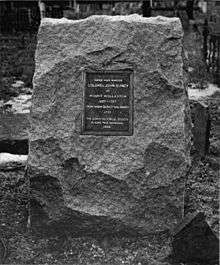 On September 3, 1715 he married Elizabeth Norton (1696–1769), daughter of the Reverend John Norton of Hingham. Although officially only achieving the rank of major in the British army, he was commonly referred to as "Colonel". Together they had:

The city of Quincy, Massachusetts is named after him.[1]