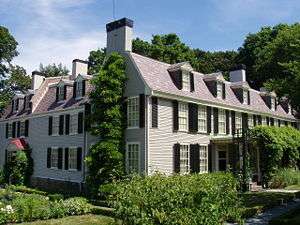 Peacefield, begun in 1731 and home of John and Abigail Adams.

Peacefield, also called Old House, is a historic home formerly owned by the Adams family of Quincy, Massachusetts. It is now part of the Adams National Historical Park. 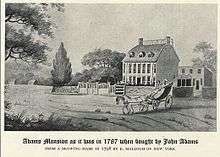 The oldest portion of the house was built in 1731 by Leonard Vassall, a sugar-planter from Jamaica, and acquired by John and Abigail Adams in 1787 after its loyalist owners had abandoned Massachusetts during the Revolutionary War. The Adams were at that time still resident in London, but returned in 1788 to occupy the house and its 40 acres (16 ha) of farmland and orchards. They were disagreeably surprised by the house, however, after their years in England. The house at that time consisted of only two low-ceilinged rooms on the ground floor, two bedrooms, and an attic. Abigail Adams wrote "it feels like a wren's nest."

During the subsequent 12 years, with Adams resident in Philadelphia first as Vice President and then as President, Abigail Adams attended to the house and farm. She greatly expanded it, adding what is now the right side of the front facade, with a fine hallway and large parlor on the ground floor and a large study above. The additions were built in the Georgian style with a gambrel roof creating a nearly full attic story. Adams returned to the house full-time in 1801 after his defeat for a second presidential term. His son John Quincy Adams also returned to the house at that time, after completing his ambassadorial term in Berlin. Further extensions to the house were made by his son, Charles Francis Adams.

The house was given by the Adams family to the United States in 1946, and is now open to the public as part of the Adams National Historical Park operated by the National Park Service. Other nearby sites include the John Adams Birthplace, John Quincy Adams Birthplace, and United First Parish Church, where both presidents and their wives are buried.

Interior of the Stone Library, a separate structure from the rest of the home.

The family and the home are intertwined with the political and intellectual history of the birth of the American nation. Two older and smaller houses are located on the property, as well as the 1870 Gothic Revival Stone Library, which houses 14,000 volumes owned by John Quincy Adams. The property contains a historic orchard of heirloom apples, and formal eighteenth century flower gardens.