Adams served in the Massachusetts State Senate, before running unsuccessfully as vice-presidential candidate for the Free Soil Party in the election of 1848. During the Civil War Adams served as the United States Minister to the United Kingdom under Abraham Lincoln, where he played a key role in keeping Britain neutral while southern agents were trying to achieve official recognition of the Confederacy. That meant conducting dialogue with both sides and monitoring the British connection in the supply of commerce raiders.

He became an overseer of Harvard University, and built Adams National Historical Park, a library in honor of his father in Quincy, Massachusetts. 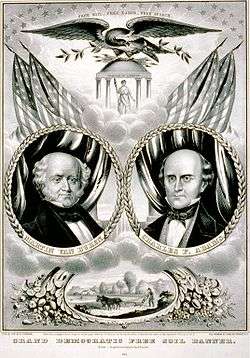 He was born in Boston and attended Boston Latin School and Harvard College, where he graduated in 1825. He then studied law with Daniel Webster and practiced in Boston. He wrote numerous reviews of works about American and British history for the North American Review.

Charles Adams and his brothers, John and George, were all rivals for the same woman, their cousin, Mary Catherine Hellen, who lived with the John Quincy Adams family after the death of her parents. In 1828 John married Mary Hellen at a ceremony in the White House, and both Charles and George declined to attend.[2]

Adams was elected to the Massachusetts House of Representatives in 1841, served in the state senate in 1844 and 1845, purchased and edited the journal Boston Whig in 1846, and was the unsuccessful nominee of the Free Soil Party for Vice President of the United States in 1848.

From the 1840s Adams became one of the finest historical editors of his era. He developed his expertise in part because of the example of his father, who in 1829 had turned from politics (after his defeated bid for a second presidential term in 1828) to history and biography. The senior Adams began a life of his father, John Adams, but wrote only a few chapters before resuming his political career in 1830 with his election to the US House of Representatives. The younger Adams, fresh from his edition of the letters of his grandmother Abigail Adams, took up the project that his father had left uncompleted and between 1850 and 1856, turned out not just the two volumes of the biography but eight further volumes presenting editions of John Adams's Diary and Autobiography, his major political writings, and a selection of letters and speeches. The edition, titled The Works of John Adams, Esq., Second President of the United States, was the only edition of John Adams's writings until the family donated the cache of Adams papers to the Massachusetts Historical Society in 1954 and authorized the creation of the Adams Papers project; the modern project had published accurate scholarly editions of John Adams's diary and autobiography, several volumes of Adams family correspondence, two volumes on the portraits of John and Abigail Adams and John Quincy and Louisa Catherine Adams, and the early years of the diary of Charles Francis Adams, who published a revised edition of the biography in 1871. He was elected a Fellow of the American Academy of Arts and Sciences in 1857.[3]

As a Republican, Adams was elected to the United States House of Representatives in 1858, where he chaired the Committee on Manufactures. He was re-elected in 1860, but resigned to become U.S. minister (ambassador) to the Court of St James's (Britain), a post previously held by his father and grandfather, from 1861 to 1868. Powerful Massachusetts Senator Charles Sumner had wanted the position and became alienated from Adams. Britain had already recognized Confederate belligerency, but Adams was instrumental in maintaining British neutrality and preventing British diplomatic recognition of the Confederacy during the American Civil War. Part of his duties included correspondence with British civilians including Karl Marx and the International Workingmen's Association.[4] Adams and his son, Henry Adams, who acted as his private secretary, also were kept busy monitoring Confederate diplomatic intrigues and the construction of rebel commerce raiders by British shipyards (like the hull N°290, launched as "Enrica" from Liverpool[5] but which was soon transformed near the Azores Islands into sloop-of-war CSS Alabama).

Mr. and Mrs. Adams on the porch at Peacefield in Quincy 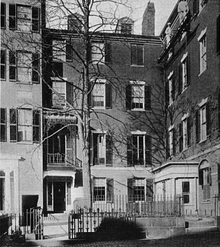 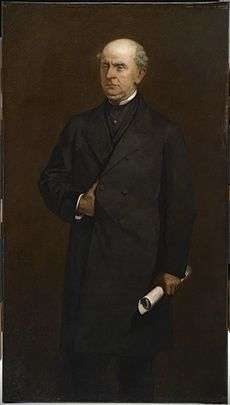 Portrait of Adams in 1867 by William Morris Hunt

Back in Boston, Adams declined the presidency of Harvard University but became one of its overseers in 1869. In 1870 he built the first presidential library in the United States to honor his father John Quincy Adams. The Stone Library includes over 14,000 books written in twelve languages. The library is located on the property of the "Old House" (also known as "Peacefield") at Adams National Historical Park in Quincy, Massachusetts.

Adams served as U.S. arbiter on the 1871–72 international commission to settle the "Alabama" claims that met in Geneva. He is considered one of the main contributors on this seminal work in forwarding the concept of world law through arbitration.

During the 1876 electoral college controversy, Adams sided with Democrat Samuel J. Tilden over Republican Rutherford B. Hayes for the presidency.

Adams died in Boston on November 21, 1886, and was interred in Mount Wollaston Cemetery, Quincy.[7] He was the last surviving child of John Quincy Adams.