The 2010 Tour de France was the 97th edition of the Tour de France cycle race, one of cycling's Grand Tours. It started on 3 July with an 8.9 km prologue time trial in Rotterdam, the first start in the Netherlands since 1996.[1] The race visited three countries: the Netherlands, Belgium and France, and finished on 25 July on the Champs-Élysées in Paris.

The total length was 3,642 kilometres (2,263 mi) including 60.9 kilometres (37.8 mi) in time-trials. Following an opening prologue time trial, the first three stages passed through the Netherlands and Belgium on routes designed to replicate some features of the spring classic cycle races. This included seven cobblestone sectors totaling 13.2 kilometres (8.2 mi), the longest distance of cobblestones in the Tour since 1983, on stage 3.[2] There were six mountain stages, three of them with mountaintop finishes, and two medium mountain stages. In the 100th anniversary year of their first inclusion on the Tour, the emphasis was on the Pyrenees, with two ascents of the Col du Tourmalet.[2]

The Tour was initially won by Alberto Contador, who was later revealed to have failed a doping test. After a series of events, the CAS finally decided in February 2012 that Contador lost his results from 2010, declaring Andy Schleck the new winner.[3] Schleck also won the young riders' competition for the third time running. France's Anthony Charteau won the polkadot jersey as the King of the Mountains whilst the Italian sprinter Alessandro Petacchi won the green jersey for victory in the points classification.

The official Tour presentation was held on 14 October 2009. It was the third consecutive Grand Tour to begin in the Netherlands, as the 2009 Vuelta a España began in Assen, and the 2010 Giro d'Italia in Amsterdam.[4]

Twenty-two teams accepted invitations to participate in the 2010 Tour de France. Sixteen of the teams were covered by a September 2008 agreement with the Union Cycliste Internationale, including two no longer part of the UCI ProTour. The sixteen teams were:[5] Six other teams, including the four ProTour teams not guaranteed a place, accepted their invitations.[6]

The teams entering the race were:[6]

: Teams not part of the ProTour.

Before the start of the race, Contador was the overall race favorite.[7][8][9] Among the other favorites were Andy Schleck, Cadel Evans, and Lance Armstrong. The US media, led by the US Tour broadcaster Versus, pitched the race as a showdown between Contador and Armstrong, both multi-tour champions going in. It has been since pointed out, however, that Armstrong's chances were perhaps exaggerated prior to the race; the two had already met that year in a two-day race in March at the Critérium International and Contador had finished four minutes ahead of Armstrong.[10]

The 97th edition of the Tour consisted of nine flat stages, six mountain stages (three summit finishes), four medium mountain stages, and two individual time trials, one of them being the opening prologue in Rotterdam.[2]

The race started in Rotterdam with a 9 km prologue won by Fabian Cancellara. Sylvain Chavanel claimed the lead from Cancellara on Stage 2, after a massive crash which involved many riders, most notably Andy Schleck, a contender for overall victory, and Alessandro Petacchi. The riders in the peloton chose to wait for the fallen riders.[14] However, on the cobbles of Stage 3, Cancellara retook the overall lead as Chavanel struggled. Fränk Schleck had to retire from the race, having sustained a collarbone fracture on a crash which delayed many of the riders in the peloton, including Contador and Armstrong who were hopeful of finishing high in the general classification. A number of their rivals, including Cancellara, Andy Schleck, Cadel Evans and Thor Hushovd, were ahead of the crash and so were able to gain a time advantage. On the same stage, Tony Martin, who had been wearing the white jersey since the prologue, lost it to Geraint Thomas, and after winning the stage, Thor Hushovd took the lead in the points

On Stage 7 Chavanel again raced away from the field to take his second stage win and maillot jaune of the 2010 edition of the race, whilst Andy Schleck took the young riders' classification lead from Thomas. Evans took the yellow jersey from Chavanel the following day on Stage 8, and in turn lost the lead to Schleck on Stage 9 following a rest day. 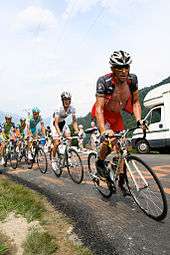 Lance Armstrong followed by other favourites on stage 9

In Stage 11, Petacchi took the green jersey from Hushovd; Mark Cavendish won the stage, but his leadout rider, Mark Renshaw, was disqualified from the Tour after headbutting Julian Dean while leading out his teammate.[15]

On Stage 15 Schleck was race leader and pressing the pace over the day's final climb of Port de Bales when he threw his chain. Contador and Denis Menchov immediately moved to the front and attacked, pressing the advantage over the crest of the climb and all the way back down into Bagneres-de-Luchon. They were aided by Sammy Sanchez and two others making a group of five riders, all looking to gain time. Schleck chased hard, but had no other riders to help bridge the gap. By stage's end, he had lost the yellow jersey and 39 seconds to Contador. Contador, who now had an eight-second lead in the race, met with a mixed reception as he received the yellow jersey on the podium at the end of the stage.[16]

Contador said that he did not know that Schleck had technical trouble, and that he had already launched an attack by then,[17] but review of the race shows that he was chasing an attack by Schleck, that he nearly struck Schleck as he moved past him, and that he looked back repeatedly on the climb while Schleck struggled to close down the gap.[18][19] Hours later, he apologised for the incident.[20] Although he was criticised by Sean Kelly and a number of riders both past and current,[16] he also found support from the likes of Bernard Hinault, Miguel Indurain, Eddy Merckx and Laurent Jalabert.[21] Cervélo team owner Gerard Vroomen commented: "Contador just gained a great chance to win, but he lost the chance to win greatly."[22] This same stage saw Anthony Charteau take the lead in the King of the Mountains competition from fellow Frenchman Jérôme Pineau. 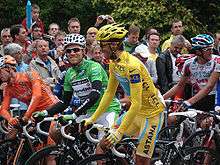 Alberto Contador in the start of the stage 17 in Pau

The 17th stage was considered this Tour's queen stage. The first-category Col de Marie-Blanque and Col du Soulor climbs preceded a grueling summit finish atop of the Hors Catégorie Col de Tourmalet, the second ascent of the Tourmalet of this year's Tour.[23] The stage turned into a battle between Andy Schleck and Alberto Contador. The tour's top two riders separated themselves from the field on the final climb. Schleck launched numerous attacks upon Contador in the final 15 kilometres, but was unable to separate from him. Contador coolly stayed on Schleck's wheel, and attacked as well once, but was pulled back by Schleck. Schleck went on to take the stage over Contador, who seemed happy to follow Schleck across the line while holding a seemingly unassailable lead in the GC.[24] Meanwhile, Anthony Charteau confirmed his hold on the Polka-dot Jersey, as the Tour completed its final categorized climbs.

Stage 19 was the final time trial. It was widely expected that Contador would increase his lead over Schleck, who in the past had struggled in this discipline, but the initial going surprised all as Schleck set a high pace that Contador had difficulty matching. By the first time check Schleck had picked up six seconds, cutting Contador's overall lead to just two seconds on the road. By the second time check Contador had recovered his losses and extended his lead over Schleck by six seconds. Over the final third of the course Contador extended his advantage, gaining an additional twenty-five seconds on his rival for an overall gain of thirty-one seconds for the stage.[25] Fabian Cancellara, the Olympic and World Time Trial Champion, won the stage by seventeen seconds over runner-up Tony Martin. In addition Denis Menchov was able to overtake Samuel Sánchez for third place overall, while Ryder Hesjedal was able to move in front of Joaquim Rodríguez for the seventh place slot in the GC. Contador's first-place lead increased to 39 seconds, essentially guaranteeing him the victory.

The final stage was won by Cavendish, who became the first winner of consecutive Champs-Élysées stages. The Manx sprinter won five stages, more than any other rider in 2010 Tour, taking his career tally to 15 stage wins.

Original tour winner Alberto Contador finished surrounded by his Astana teammates. This was his third Tour de France in three consecutive entries, after having won it in 2007 and 2009. Schleck finished in second place for the second year in a row (later to receive the victory after Contador's positive test and subsequent ban) and Menchov completed the podium in third place. Petacchi won the Green jersey. His second-place finish in the final stage gave him enough points to finish just above Cavendish and Hushovd. France's Charteau won the Polka dot jersey.[26][27]

In September 2010, Contador revealed that a urine sample he had given on 21 July, a rest day in the 2010 Tour de France, had contained traces of clenbuterol. He has stated, due to the number of other tests he passed and that only a tiny amount of the substance was detected in the one he failed, that food contamination was to blame.[28]

The UCI issued a statement reporting that the concentration was 50 picograms per millilitre, and that this was 1/40 the minimum standards of detection capability required by WADA, and that further scientific investigation would be required.[29][30][31][32]

In late January 2011, the Spanish Cycling Federation proposed a one-year ban, but it subsequently accepted Contador's appeal and cleared him of all charges. The UCI and the World Anti-Doping Agency each referred the decision independently to the Court of Arbitration for Sport in March 2011, but Contador remained free to ride until their ruling was made.[33] The hearing was delayed until after the 2011 Tour de France at Contador's request and then deferred to November 2011.[34] On February 6, 2012, the CAS stripped Contador of the 2010 title, making Andy Schleck the winner.[3]

Armstrong was stripped of all his professional results from August 1998 to August 2012, including his seven Tour titles on October 22, 2012.[35][36] Armstrong's finish in the 2010 Tour—originally 23rd; 22nd at the time of its stripping—was also stripped. In January 2013, Armstrong admitted to doping in an interview with Oprah Winfrey. Although he admitted to have doped in his seven wins, he denied doping in the 2009 and 2010 Tours. Regardless, Armstrong was stripped of his finishes in those two Tours as well, because his blood values indicated that he doped. USADA's report stated that "The likelihood of Armstrong’s blood values from the 2009 and 2010 Tours de France occurring naturally is less than one in a million".[37]

On 10 July 2014, a UCI press release detailing various athlete sanctions specified that Menchov had been banned (for a period of two years) until 9 April 2015 due to adverse biological passport findings. Due to this, he has been disqualified from the 2009, 2010 and 2012 Tours de France.[38]

In May 2011, newspaper l'Equipe published a list of cyclists and an index that indicated the suspicion for doping use.[39]