Ketill Björnsson, nicknamed Flatnose (Old Norse: Flatnefr), was a Norse King of the Isles of the 9th century.[1]

Ketill is a character in such works as the Laxdæla saga, Eyrbyggja saga and Saga of Erik the Red, and his genealogy is described in detail in the Landnámabók. The story of Ketill and his daughter Auðr (or Aud) was probably first recorded by the Icelander Ari Þorgilsson, who lived from 1067 to 1148.[2] Þorgilsson was born not long after the death of his great-grandmother Guðrún Ósvífrsdóttir, a prominent character in the Laxdæla saga whose husband, Thorkell Eyjolfsson, was descended from Auðr. Þorgilsson was thus a direct descendant of Ketill and so, when he wrote his story of Ketill, he was drawing on family history.[2] Nonetheless, these Old Norse sagas were written down long after the events they describe (like most Greco-Roman and medieval histories), and no contemporary record exists of his life, with the arguable exception of a single entry in the Annals of Ulster.

Ketill Björnsson was the son of Björn Grímsson. In the Laxdaela saga he is recorded as being from Romsdal (Raumsdal), a valley in the county of Møre og Romsdal, between Nordmøre and Sunnmøre[3] and from Sogn in the Landnámabók.[4]

Nor Wick, Unst, one of the closest landfalls on Shetland to Norway. There is evidence that Scandinavian settlers may have reached here as early as the mid 7th century.[5]

After Harald Fairhair had won the decisive Battle of Hafrsfjord in the late 9th century, many fled from Norway.[6] According to the Orkneyinga saga, some of these Vikings began to raid Norway in summer from the Orkney and Shetland islands north of mainland Scotland. For this reason Harald set sail to uproot the attackers. He defeated them and also took possession of the Hebrides and the Isle of Man.[7] This story is retold in the Eyrbyggja saga, but here it is Ketill rather than Harald who led the expedition, and after the initial victory the former retained the islands as "personal domain" rather than bringing them under Harald's rule.[8] In the Laxdaela saga the same story is told, but here Ketill is one of the Vikings who have fled to the Isles to escape Harald's tyranny.[9] In the Landnámabók the initial conquest is led by Harald, but as soon as he returned to Norway the raiders regrouped. At this point Harald sent Ketill to win the islands back again.[10] Ketill did so but paid no tribute,[11] at which point Harald took possession of what was owed from possessions of Ketill in Norway and sent away Ketill's sons. Some sources refer to Ketill as "King of the Sudreys"[12] although there is little evidence that he himself claimed that title.

According to the Landnámabók, Kettil became ruler of a region already settled by Scandinavians.[13] He left no successors there, and there is little record of Norse activity in the west of Scotland in the first four decades of the 10th century.[12]

Most of Ketill's family eventually emigrated to Iceland. Ketill's wife was Yngvild Ketilsdóttir, daughter of Ketill Wether, a hersir from Ringerike. They had a number of children, including Bjǫrn Ketilsson, who lived at Bjarnarhofn; Helgi "Bjolan" Ketilsson, who lived at Esjuberg on Kjalarnes; Thorunn Ketilsdatter, wife of Helgi the Lean, the first settler in Eyjafjordur bay; and Jorunn Ketilsdatter. Ketill's daughter, Aud the Deep-Minded, married Olaf the White, King of Dublin. Their son, Thorstein the Red, briefly conquered much of northern Scotland during the 870s and 880s before he was killed in battle. Aud and many members of her clan settled in the Laxdael region of Iceland.[14][15]

Hunter (2000) states that Ketill was "in charge of an extensive island realm and, as a result, sufficiently prestigious to contemplate the making of agreements and alliances with other princelings".[16] However, Woolf (2007) suggests that the story of his failing to pay tax to Harald "looks very much like a story created in later days to legitimise Norwegian claims to sovereignty in the region"[11] and some scholars believe that this entire story of Harald's expedition is apocryphal and based on the later voyages of Magnus Barefoot.[17] Although Norse military activity in Ireland in the 9th century is well documented in Irish sources, they contain no record at all of Harald Fairhair's voyage to the west.[18]

Furthermore, Harald is assumed to have annexed the Northern Isles (comprising Orkney and Shetland) in 875 or later. If Ketill's suzerainty post-dates this time, it is hard to see how Thorstein the Red, an adult grandson of his, could have been active in the 870s and 880s. It is therefore likely that Ketill's floruit in the Hebrides was at a period that pre-dates Harald's victory at Hafrsfjord.[19]

Ketill Flatnose is also sometimes equated with Caittil Find, a reported leader of the Gallgáedil recorded in the Annals of Ulster as fighting in Ireland in 857.[20] This source states simply that "Ímar and Amlaíb inflicted a rout on Caittil the Fair and his Norse-Irish in the lands of Munster."[21] (Ímar and Amlaíb are well-attested Norse leaders active in Ireland and the Isles in the 9th century.)

The Ketill/Caittil relationship was first proposed by E. W. Robertson in 1862,[22] and then rejected by J. H. Todd in 1867.[23] Robertsons position has since been supported by among others W. F. Skene and A. P. Smyth,[2] while others, including A. O. Anderson[24] and Donnchadh Ó Corráin[25] are more skeptical.

In more recent scholarly debate, Claire Downham has endorsed Ó Corráin's view.[26] The connection is described by Woolf (2007) as "extremely tenuous".,[11] but Jennings and Kruse (2009) have supported the identification. 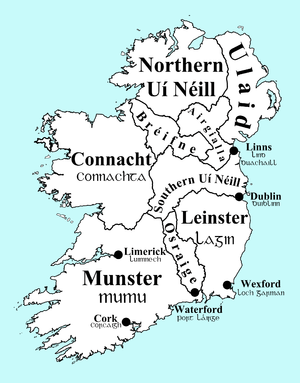 Ireland circa 900. Osraige was a buffer state between Munster in the south west and Leinster to the south east.

Jennings and Kruse recognise the deficiencies of the saga materials but suggest that "they should not be summarily written off as void of any historical value".[2] They note that: 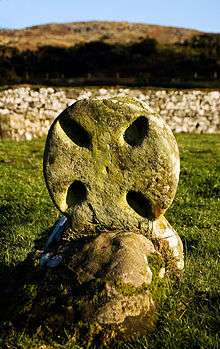 Dál Riata was a Gaelic kingdom in the Argyll and Bute region of Scotland. Jennings and Kruse argue that Ketill Bjornsson could have taken "control of Dál Riata with its islands".[31] They note the correspondence between the Gaelic name Dál Riata and the fact that when Auðr, settled in the Breiðafjörður region of western Iceland it was in a region called Dalir or Dalaland (modern Dalasýsla).[31] Furthermore, "in the Breiðafjörður area there is an indisputably nostalgic Celtic precedent for quite a few names."[32] Examples include islands called Pjattland (Pictland) and Írland (Ireland) and the nearby Patreksfjörður and Trostansfjörður named in honour of two Celtic saints.[32]

They also quote the Irish Martyrology of Tallaght, which refers to a "[Feast of] Bláán, bishop of Kingarth in Gall-Ghàidheil". This indicates that St Blane of Kingarth in Bute was closely connected to the Gallgáedil. The text is dated not later than the early tenth century and it seems that this part of Dál Riata was by then part of Gallgáedil-held territory.[33] Fraser (2009) has suggested that that Little Dunagoil near Kingarth could have been the Dalriadan Cenél Comgaill capital prior to the Norse incursions.[32][34]

The Chronicum Scotorum refers to a battle that took place in 904 in which two grandsons of Ímar and their ally "Catol" were victorious against "Aed" who was evidently a leader in either Ireland or Pictland. It has been suggested that Catol was Ketill Flatnose (although once again the chronology is problematic), or alternatively that he was Cadell ap Rhodri, a King of Gwynedd.[35]